Former President Donald J. Trump cast his ballot in his home state of Florida during the 2022 midterm

Former President Trump said if he formally announces a 2024 White House bid and is re-elected, he would return to the nation’s capital with experience and a new perspective, without having to rely on Washington insiders, and would build on his "unbeatable" America First record.

The former president sat for a wide-ranging interview on Trump Force One, a Boeing 757, Monday night with Fox News Digital and four other reporters after teasing during a rally in Dayton, Ohio that he plans make a "major" announcement from Mar-a-Lago on Nov.15, likely regarding the launch of his possible third presidential campaign.

The first thing Trump said he would do if he runs for president and wins in 2024 is "seal up the border and stop crime."

>>Watch the interview on foxnews.com 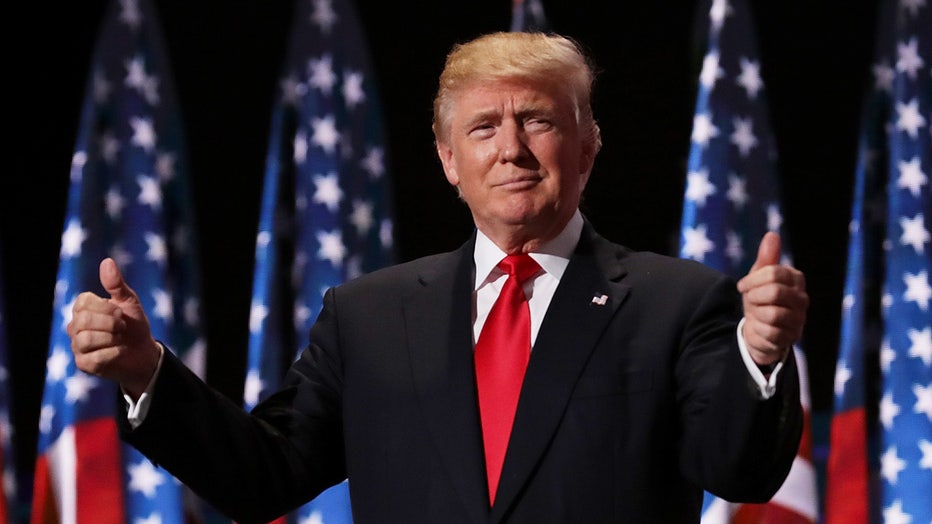 Donald Trump gives two thumbs up to the crowd during the evening session on the fourth day of the Republican National Convention on July 21, 2016 at the Quicken Loans Arena in Cleveland, Ohio. (Photo by Chip Somodevilla/Getty Images)

Before that though, Trump is calling for a GOP leadership change in Congress, specifically pointing to Senate Minority Leader Mitch McConnell, R-Ky. He also warned potential Republican presidential candidates, like Florida Gov. Ron DeSantis, against running against him in 2024, saying it would "be good for the party."

Reflecting on his administration from 2017 to 2021 and people he tapped to serve in top cabinet posts, Trump said, "I never did this before."

"RINO" stands for "Republicans In Name Only," and it is a term he applied to people he "relied on" early in his presidency, like Chris Christie and Mike Pence, "who was a nice man."

Gov. Ron DeSantis urged supporters at his final campaign stop to get to the polls on Election Day in hopes of building a "red wave" that would sweep Democrats from office in Florida and nationwide.

Trump said both of his attorney generals — Jeff Sessions and Bill Barr — were his "two worst" picks, saying they both were "really bad."

"I know everybody now," Trump said. "See, I didn’t know anybody. I just got to Washington."

TRUMP SAYS HE WILL MAKE A 'BIG ANNOUNCEMENT' ON NOVEMBER 15

In a November 2021 exclusive interview with Fox News Digital, Trump first said he would "probably" wait until after the 2022 midterm elections to formally announce whether he would launch another White House bid. Trump seems to be sticking to his original timeline.

Speculation around a possible Trump 2024 announcement has been building since the former president left the White House. Many possible GOP presidential hopefuls have been waiting in the wings for Trump to make his decision on whether he will run, but the field of Republicans who are mulling their own campaigns is a crowded one. 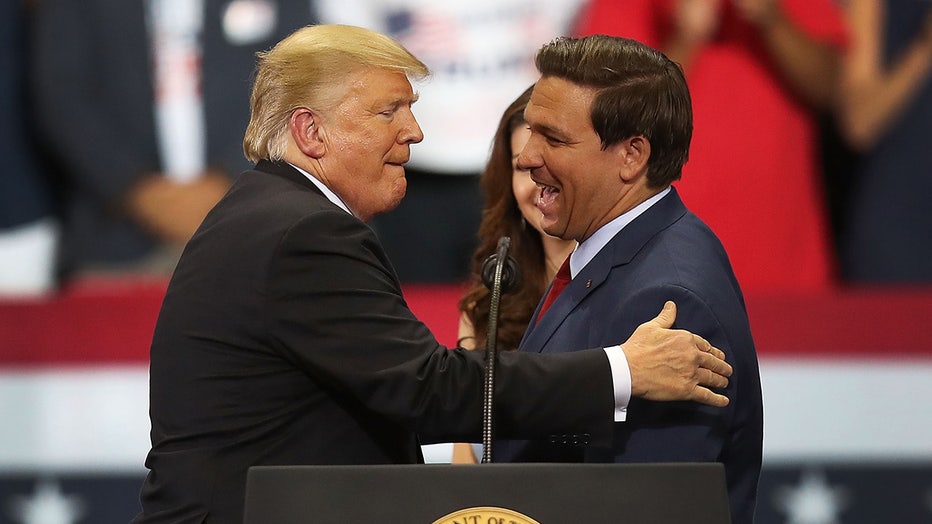 During a rally in Pennsylvania over the weekend, Trump mocked DeSantis and referred to him as "Ron DeSanctimonious" in what some suggested was a sign of growing tension between the two over 2024. The following day, Trump gave his support to DeSantis, who is in a competitive gubernatorial race, and urged voters to cast their ballots for him.

When asked whether the two are in some kind of "tiff," Trump replied, "There’s not a tiff with me, and I’m way up in the polls," Trump said. "No, there’s not."

Later in the interview, Trump said DeSantis is a "fine guy."

"Any of that stuff is not good — you have other people that possibly will run, I guess," he added. "I don’t know if he runs. If he runs, he runs."

Trump did say that if DeSantis does run, "I would tell you things about him that won’t be very flattering — I know more about him than anybody — other than, perhaps, his wife."

When asked if President Biden will run for re-election, Trump said, "I don’t think he runs. It is inconceivable."

On rumors that former 2016 Democratic presidential nominee Hillary Clinton could run for president again, Trump said he would welcome it.

"I hope so, that’s fine," he said. "Look, we beat her. I think she is a very bad candidate. She is unliked by everybody and I have a very strong record that’s very unbeatable." 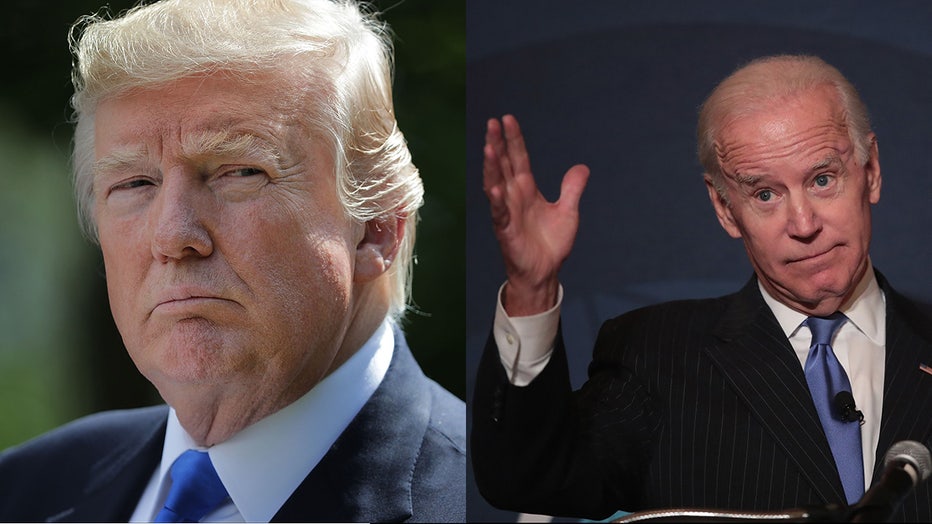 Trump has been criticized for continuing to repeat claims that the 2020 presidential election was "rigged" or "stolen"—comments that Democrats and possibly some Republicans could use against him in 2024.

When asked if he would continue to focus on the 2020 election, Trump told Fox News Digital, "I think I’ll always talk about it."

"I actually think it energizes our base," Trump said, predicting that if he stops talking about it, he could "lose a lot of votes. "I happen to think, above everything else, it is all true. It was a stolen election, and they shouldn’t let it happen again."

As for the 2022 midterm elections and his feelings towards Republicans in Congress, Trump said House Minority Leader Kevin McCarthy, R-Calif., has his support for speaker of the House should the GOP take back the majority Tuesday. 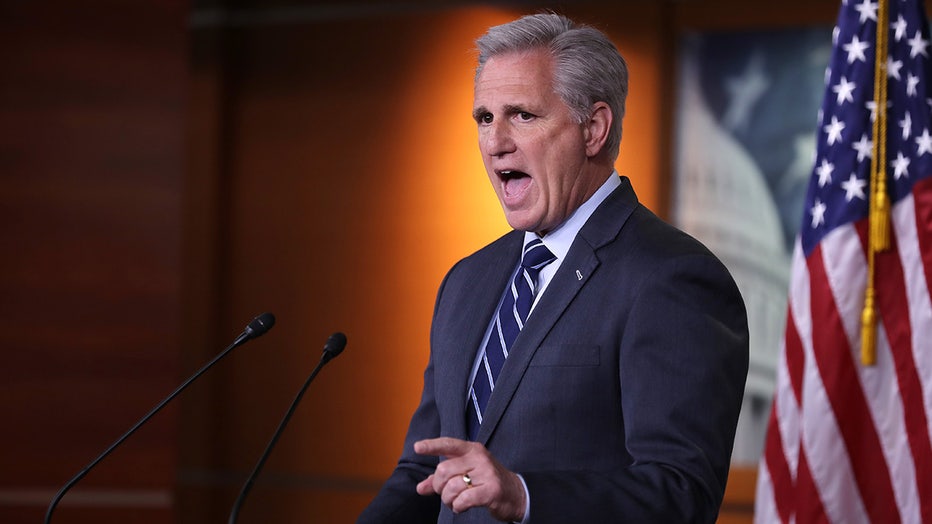 However, over in the Senate, Trump slammed Senate Minority Leader Mitch McConnell, R-Ky., and called him a "lousy leader."

"People are very upset with Mitch McConnell — I’ll tell you who is upset with him — the public," Trump said, noting that he endorsed him this cycle after McConnell "begged" him. 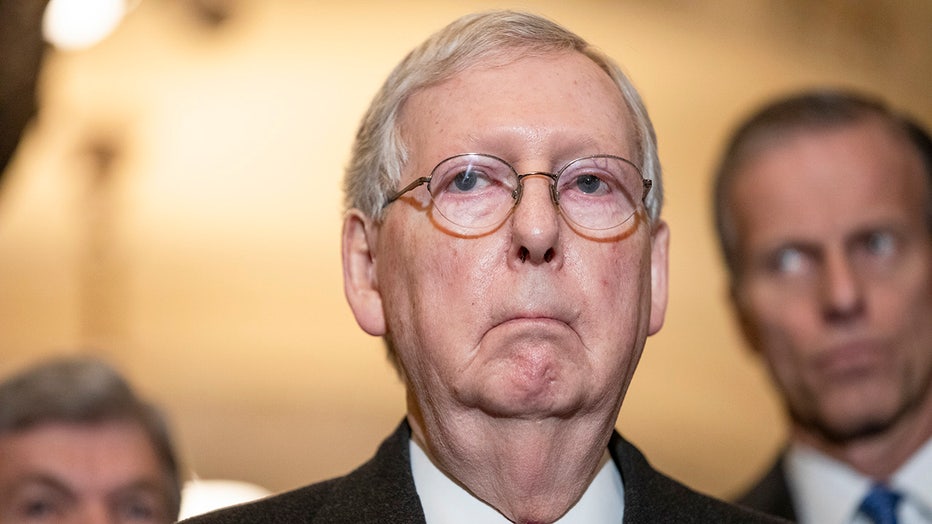 "I think we’ll probably have to live with him for two years," Trump said. "And if I run and if I win, I will say, don’t send me any legislation if he’s the leader, and he’ll be out in two minutes."

Trump said Republican Sen. Rick Scott, R-Fla., could be a "likely candidate," calling him a "very talented guy" who is "highly underrated."

"I think Rick Scott is a likely candidate — he hates the guy," Trump said, referring to Scott’s feelings towards McConnell. 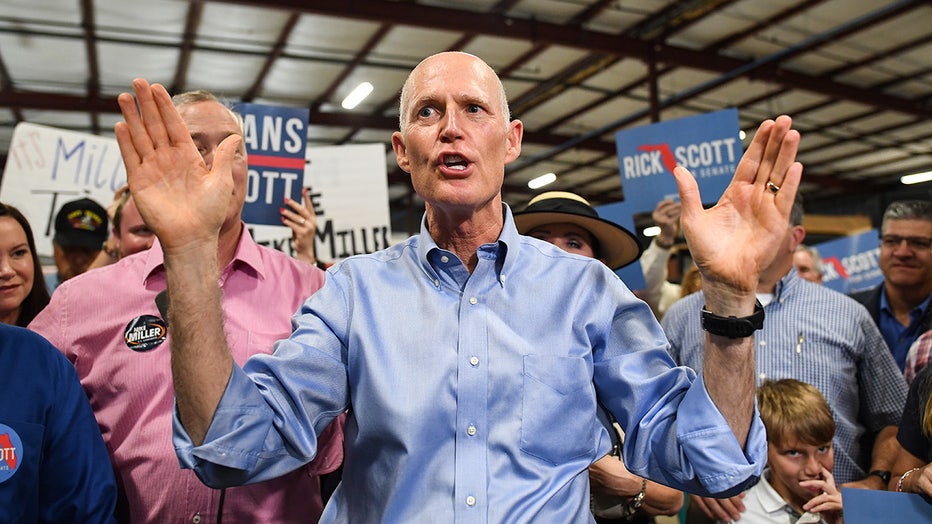 Florida Senate candidate Rick Scott, attends a Get Out the Vote Rally at Skyline Attractions on November 2, 2018 in Orlando,Florida. (Photo by Jeff J Mitchell/Getty Images)

Trump touted his administration’s record, including securing the southern border, lowering taxes, re-building the U.S. military, the COVID response, the creation of vaccines under Operation Warp Speed and having "defeated 100% of ISIS."

Trump also pointed to his "America First" foreign policy, stressing that the war in Ukraine would not have happened under his presidency and slamming Biden's performance.

"We have somebody who is going to get us into a nuclear war," Trump said. "We would have never had the Ukrainian problem."

BIDEN PREPARING FOR POTENTIAL 2024 RE-ELECTION BID BEHIND THE SCENES

Trump touted his efforts to have NATO countries pay their fair share in defense and strengthening trade deals abroad.

He pointed to the killing of ISIS leader Abu Bakr al-Baghdadi in 2019 and top Iranian Gen. Qassem Soleimani in an airstrike in Baghdad in 2020. 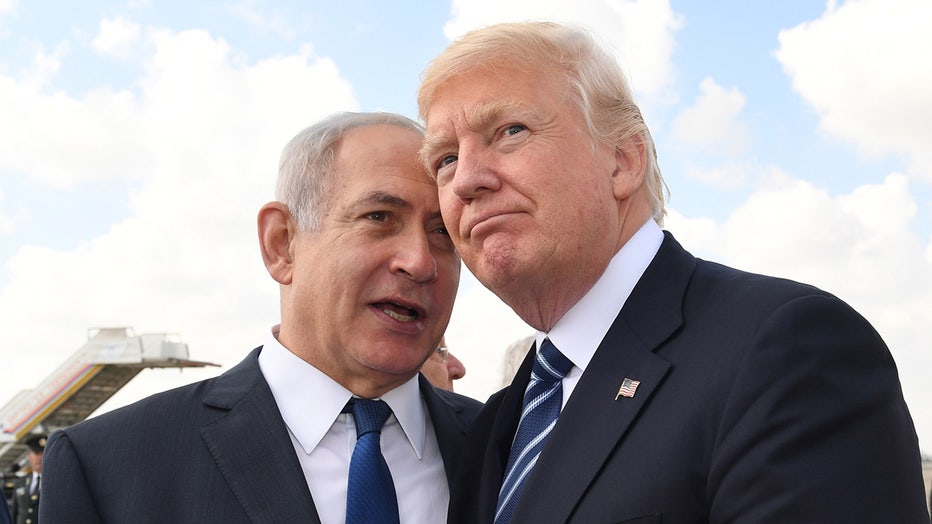 In this handout photo provided by the Israel Government Press Office (GPO), Israeli Prime Minister Benjamin Netanyahu speaks with US President Donald Trump prior to the President's departure from Ben Gurion International Airport in Tel Aviv on May 23

The former president was also asked if he has spoken with Israeli Prime Minister Benjamin "Bibi" Netanyahu after his re-election last week.

Trump also discussed the "Russia hoax" and the weaponization of the Justice Department — specifically with regard to the Trump-Russia investigation.

"I did the right thing in firing [FBI Director James] Comey," Trump said. "If I didn't fire him, a lot of people said if I didn’t fire Comey, that was a coup attempt."

FLASHBACK: TRUMP WILL 'PROBABLY' ANNOUNCE 2024 PLANS AFTER MIDTERMS: 'A LOT OF PEOPLE WILL BE VERY HAPPY'

Special Counsel John Durham is still investigating the origins of the Trump-Russia probe, after Special Counsel Robert Mueller found no evidence of collusion or conspiracy between the Trump campaign and Russia to influence the 2016 presidential election.

Looking ahead, Trump’s "major" announcement from Mar-a-Lago will come a week after the midterm elections.

"I didn’t want to interfere," Trump said, suggesting a formal announcement on 2024 could distract from Tuesday’s elections.

Trump, who has played a major role in the 2022 midterms, endorsing and raising nearly $350 million for more than 300 Republican candidates, said Tuesday’s midterms will be "very interesting."

"Maybe the most interesting midterm they’ve ever had," Trump said. "I think we have a good chance of big success."