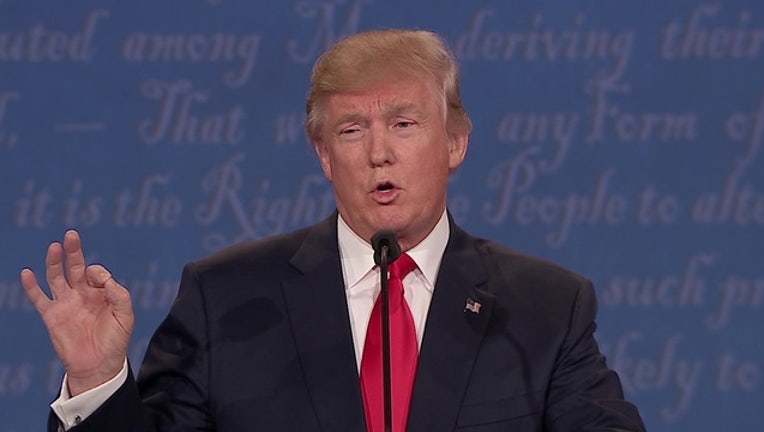 The Republican presidential nominee, trekking across must-win Florida, insisted "Obamacare is just blowing up" after the government projected sharp cost increases for President Barack Obama's signature health care law. Democrat Hillary Clinton, fighting to block Trump in the same battleground state, has vowed to preserve insurance for the millions of Americans covered under the law, but her team described the cost surge as a "big concern."

The renewed emphasis on health care gave battered Republican House and Senate candidates a brief respite from months of painful questions about their presidential nominee, who has questioned the integrity of the U.S. election system while facing personal allegations of sexual misconduct. Trump has denied any wrongdoing.

"My first day in office I'm going to ask Congress to put a bill on my desk getting rid of this disastrous law," a fiery Trump told thousands of voters gathered at an airport along the Interstate-4 corridor.

Blessed with an unexpected political gift, however, it's unclear whether Trump will be able to capitalize.

"He could make this race for the last two weeks a referendum on Obamacare. But of course he won't do that," said former Ted Cruz strategist Chris Wilson. "It's just a matter of him swatting at flies instead of having a coherent and consistent message."

Indeed, Trump has struggled to stay focused on the traditional issues throughout his outsider candidacy. He opened Tuesday by promoting one of his Florida golf resorts, highlighting the extraordinary intersection between his business and political interests. Trump is also scheduled to attend Wednesday's opening of his new Washington hotel.

"We're at Trump National Doral. And it's one of the great places on earth," Trump said during a visit to his golf club. He encouraged his employees to praise him at the microphone and said many of them are having "tremendous problems with Obamacare."

The Doral general manager later clarified that 95 percent of the club's employees are on company-provided insurance.

The Department of Health and Human Services reported late Monday that premiums will go up sharply next year under the federal health care program, and many consumers will have just one choice for their insurer. Before federal subsidies, premiums for a midlevel benchmark plan will increase an average of 25 percent across the 39 states served by the federally run online market. Some states will see much bigger jumps, others less.

Republicans have been fighting the president's health care law since 2010 with little political success. Yet in a campaign dominated by Trump's controversies, vulnerable Republicans across the nation are eager to latch onto a familiar conservative cause.

In Arizona, Republican Sen. John McCain has repeatedly assailed his Democratic challenger, Rep. Ann Kirkpatrick, for having called the health care overhaul her proudest vote. In Indiana, GOP Rep. Todd Young has sought to keep the focus on former Democratic Sen. Evan Bayh's vote for the law before leaving the Senate six years ago.

Several Republicans in difficult races leapt at Tuesday's rate hike, including Sen. Kelly Ayotte in New Hampshire and Roy Blunt in Missouri. Fighting a challenge from New Hampshire Gov. Maggie Hassan, Ayotte's campaign asked, "Will Hassan continue to stand in lock-step with Hillary Clinton and her party in support of the failing law?"

Clinton did not address the cost surges during an afternoon rally on the Broward College campus in Coconut Creek.

Noting that her crowd was diverse, she said, "I bet some of you or maybe your parents or grandparents came from places where none of that was true." She said Trump was "attacking everything that has set our country apart for 240 years."

Also Tuesday, Clinton picked up the endorsement of former Secretary of State Colin Powell, a Republican who announced his intention to vote for her during an appearance in New York.

On Obamacare,  spokeswoman Jennifer Palmieri conceded that "cost controls are a big concern for Hillary Clinton."

She said the Democratic presidential nominee has a plan to lower insurance costs, "both through the public option and a Medicare buy-in." She warned that Trump's plan would strip insurance from roughly 20 million Americans who now benefit.

Trump, who must win the battleground state to have any chance at the 270 electoral votes needed to win the presidency, was appearing at three campaign events on Tuesday, his third straight day in the state. Clinton, who can win the presidency with or without Florida, made one appearance on the first day of a two-day swing.

While the candidates sparred hundreds of thousands of Floridians were voting. Tuesday marked the second day of early in-person voting. Early voting by mail began two weeks ago.

Traditionally, Republicans have run up a large advantage in mail-in-ballots, while Democrats rely on early voting to boost their turnout numbers. This year the parties are running nearly even.

"I believe Florida's a must-win and I think we're winning it," Trump told Fox News.