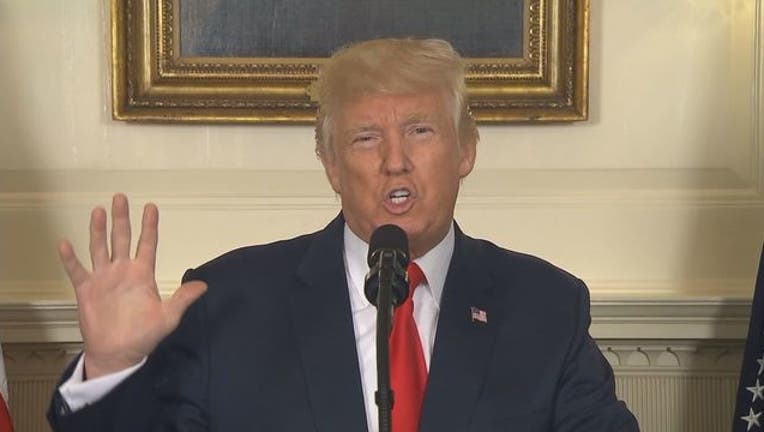 WASHINGTON (Fox 32 News & AP) - President Donald Trump plans to put an end to the so-called "Dreamers" program, which offered amnesty to immigrants if they were brought to the United States as children and met strict security guidelines, according to reports.

The news was first reported by Politico. The official announcement is expected to come on Tuesday. Politico said that the end of the program, known as the Deferred Action for Childhood Arrivals, or DACA, would come in six months.

Despite his fiery pledges during the presidential campaign to end the program, Trump had spent the last week mulling his choices, going over his options again and again, according to several people with knowledge of the deliberations. The people spoke on condition of anonymity in order to discuss private conversations.

"I think that this isn't a decision that the president takes lightly and he's taking time and diligent effort to make sure that he goes through every bit of the process," White House press secretary Sarah Huckabee Sanders said Friday. "I think the decision itself is weighing on him, certainly."

House Speaker Paul Ryan and a number of other legislators had urged the president to hold off on scrapping the program to give them time to come up with a legislative solution to protect those now covered by the program.

"These are kids who know no other country, who are brought here by their parents and don't know another home. And so I really do believe that there needs to be a legislative solution," Ryan told Wisconsin radio station WCLO.

Republican Sen. Orrin Hatch of Utah also urged Trump not to revoke former President Barack Obama's efforts to protect "individuals who entered our country unlawfully as children through no fault of their own and who have built their lives here."

Pushing the debate over to Congress would add immigration, long a third-rail issue in Washington, to an already packed fall congressional agenda that includes must-pass measures to raise the debt ceiling, shape the federal budget and provide hurricane relief funding.

Republican leaders have worried that Trump would rescind legal status for the so-called dreamers since his first day in office. Some congressional GOP lawmakers spent Inauguration Day urgently trying to reach senior White House officials about the matter after hearing rumors that Trump could roll back the deportation protections as one of his first moves.

Trump had railed against the Obama program during the presidential campaign, slamming it as an illegal "amnesty" that he would immediately end.

Instead, the new president left the protections in place, overruling top advisers including former chief strategist Steve Bannon and policy aide Stephen Miller. The advisers continued to press the matter occasionally in recent months, but Trump always put off the decision for another time.

A group of Republican state officials sent a letter to Attorney General Jeff Sessions in June announcing a Sept. 5 deadline: If the president didn't halt the program by then, the lawmakers would challenge DACA in court.

As the deadline neared, anxious Republicans began urging the White House to try to persuade the group, led by Texas Attorney General Ken Paxton, to further postpone any lawsuit. It was an approach the administration had also seriously considered earlier in the week.  But Paxton made clear the date was non-negotiable.

"No, we are not going to push back the deadline," said spokeswoman Jennifer Speller.

The president also encountered countervailing pressure from those working to keep the program -- including CEOs, Roman Catholic bishops and celebrities -- and staging daily protests, phone banks, demonstrations and letters.

There appeared to be some signs the pressure was having an impact. Late Friday, the attorney general of Tennessee, one of those who had signed the letter, announced his office was no longer interested in the lawsuit and would encourage legislation to protect the dreamers instead.

"There is a human element to this, however, that is not lost on me and should not be ignored," wrote Herbert Slatery III. "At this time, our Office has decided not to challenge DACA in the litigation, because we believe there is a better approach."

Many DACA advocates still expect the president to announce, in the end, that he will stop the issuance of new work permits under the program, effectively phasing it out over the coming months. One person familiar with the White House discussions said the president was expected to take that route. But the person said the president was looking for ways to soften the blow, such as ending the program at a future date to give Congress time to come up with alternative protection.

The White House also could announce that it will allow the lawsuit to go forward and decline to have the Justice Department defend DACA in court, taking the matter out of its hands.

Trump seemed reluctant Friday to spark the anger that is sure to erupt no matter what he decides.

"We love the dreamers, we love everybody," he told reporters.

Asked what he would say to young immigrants who are awaiting his move, scared about their fate, Trump replied, "I think the dreamers are terrific."