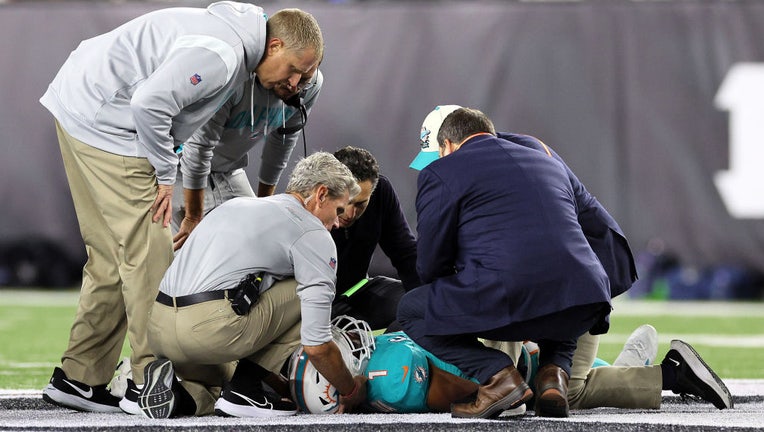 Medical staff tend to quarterback Tua Tagovailoa #1 of the Miami Dolphins after an injury during the 2nd quarter of the game against the Cincinnati Bengals at Paycor Stadium on September 29, 2022 in Cincinnati, Ohio. (Andy Lyons/Getty Images)

CINCINNATI - Miami Dolphins quarterback Tua Tagovailoa sustained neck and head injuries after being slammed to the ground Thursday night against the Cincinnati Bengals and was stretchered from the field.

Tagovailoa was chased down and sacked by 6-foot-3, 340-pound Josh Tupou with about six minutes left in the first half. He was spun around and thrown to the turf. While on the ground, his hands froze in front of his face. He remained down for more than seven minutes before being loaded on a backboard, stabilized and strapped to a stretcher after his facemask was removed.

Dolphins players gathered around as Tagovailoa was rolled off the field and the crowd chanted "Tua! Tua!"
Miami coach Mike McDaniel said Tagovailoa called for him when he went down.

"I could tell it wasn’t the same guy that I was used to seeing," McDaniel said. "It was a scary moment. He was evaluated for a concussion. He’s in the concussion protocol, but he’s being discharged.

"It’s an emotional moment. It’s not a part of the deal you sign up for. His teammates and myself were very concerned, but he got checked out and it’s nothing more serious than a concussion."

Teddy Bridgewater, who replaced the injured Tagovailoa, said the Miami sideline went quiet when the starting QB was on the turf.

"Complete silence," Bridgewater said. "He’s one of us. At the end of the day, it’s only a football game. In that moment, you saw how we feel about Tua. He’s our captain. He’s our leader. It was great to see the doctors handling the situation."

Bengals coach Zac Taylor had an emotional reaction to Tagovailoa going down, saying: "It’s a heavy moment. You hate to see that happen. It’s a tough moment for everybody."

"Praying for you Tua," Wilson wrote.

The 24-year-old Tagovailoa was suffering from a sore back and was listed as questionable for most of the week ahead of the game.

Tagovailoa briefly left Sunday’s 21-19 victory over the Buffalo Bills after appearing to be disoriented by what the team originally said was a head injury after taking a hard hit from Bills linebacker Matt Milano late in the first half. He missed just three snaps and returned after halftime, a decision that prompted a joint review by the NFL and National Football League Players Association of what went into the decision to allow him to return to the game.

The team and Tagovailoa said after Sunday's game the quarterback had a back injury that caused his awkward stumble and fall after he was slammed into the turf in the second quarter. The team said Monday that Tagovailoa was not in concussion protocol.

He said he "hyper-extended" his back after getting his legs caught under someone on a quarterback sneak.

McDaniel said Thursday that he didn't think an injury from last week made him fall the same way this week.

After Tagovailoa's injury Thursday, the NFLPA tweeted: "Player health and safety is at the core of the union’s mission. Our concern tonight is for Tua and we hope for a full and speedy recovery. Our investigation into the potential protocol violation is ongoing."
Some criticized the decision to play Tagovailoa so soon after his injuries in Sunday's game.

Hall of Famer Shannon Sharpe tweeted: "That’s a serious injury . Tua shouldn’t have been out there with Sunday Thursday turn around. Sometimes players need protecting from themselves. Dolphins failed Tua."

Before leaving Thursday's game, Tagovailoa was 8 for 14 for 100 yards and an interception. Bridgewater threw a touchdown pass to Chase Edmonds with 15 seconds left in the half.

The play of Tagovailoa, who won a national championship at Alabama, has been key for the 3-0 Dolphins. He came into the game second in the NFL with 925 passing yards.