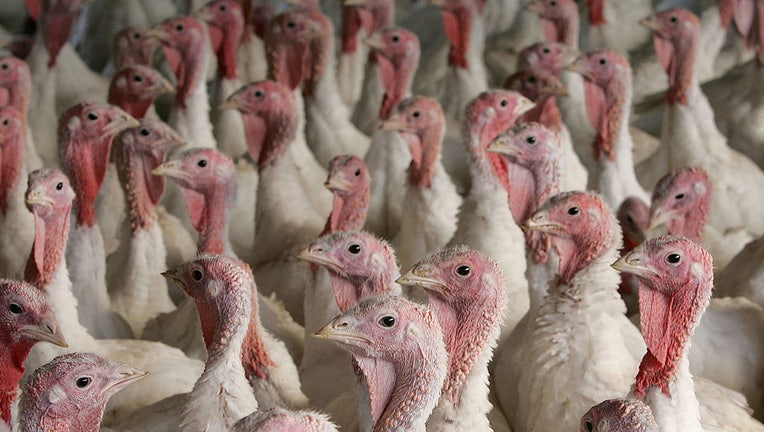 FILE-Turkeys are seen at a farm on November 22, 2004 in Sonoma, California. (Justin Sullivan/Getty Images)

Shoppers will soon flood grocery stores searching for a turkey for Thanksgiving dinner, but the ongoing avian bird flu could cause a rise in prices.

Forty-two states have been affected by the bird flu, leading to more than 47 million chickens and turkeys being killed. The H5N1 strain of the bird flu is driving outbreaks in North America and Europe, FOX News reported.

RELATED: Birds euthanized at animal sanctuary due to avian flu

Bird flu usually spreads during colder months of the year. However, turkey businesses began reporting flu cases in July, a time when most farmers raise flocks of turkeys for the holiday season, according to CNBC.

Officials order entire flocks of birds to be killed when the virus is detected on farms. More than 6 million chickens and turkeys were slaughtered in September to limit the spread of the disease, the Associated Press reported.

Health officials explain that bird flu doesn’t jeopardize food safety because infected birds aren’t allowed into the food supply, and properly cooking meat and eggs to 165 degrees Fahrenheit will kill any viruses, according to the AP.

RELATED: First wild case of bird flu detected in US in 5 years

What is the avian flu?

Wild birds can carry HPAI A(H5N1) bird flu without showing symptoms, but these viruses can cause illness and death in domestic poultry, the Centers for Disease Control and Prevention (CDC) shared on their website.

The agency explains that infected birds shed the avian influenza virus in their saliva, mucous and feces. Human infections can occur if it’s inhales or gets into someone’s eyes, nose or mouth. People with close or prolonged contact with infected birds could be at a higher risk of infection.

The flu poses a low risk to people but can spread quickly through chicken houses and other poultry businesses, FOX 5 New York reported.

FOX News, FOX 5 New York, and the Associated Press contributed to this story. This story was reported from Washington, D.C.