Turtles found in park with swastikas painted on shells

The turtles were found at a park just outside of Seattle. Local police said they received an influx of calls from park visitors about the disturbing paint job.

RENTON, Wash. - Two turtles at a park in Washington state are being rehabilitated after someone painted apparent swastikas on their shells, authorities said — and the act prompted an anti-hate protest at the park.

The turtles were found at Gene Coulon Memorial Beach Park in Renton, a suburb of Seattle. The Renton Police Department said it received an influx of calls from park visitors about the disturbing paint job, the Seattle Times reported.

"I was absolutely horrified and my eyes actually got teary," park visitor Anne-Marie Desiderio told the newspaper. She spotted the two turtles sunning on a log in the water earlier this month.

According to the Seattle Times, the markings appeared to be spray-painted on the animals. 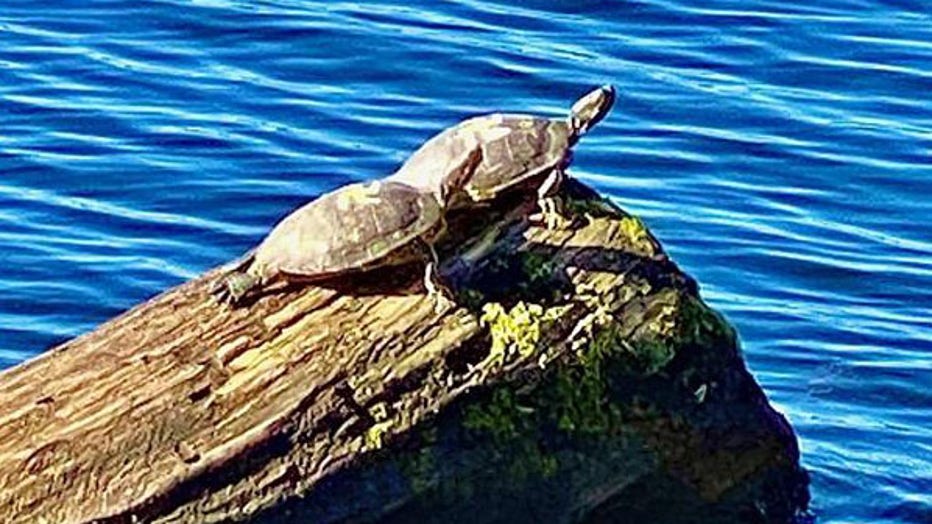 The turtles were spotted with the apparent swastika markings on their shells earlier this month in Renton, Washington. (Photo credit: Provided / Renton Police Department)

The police department posted about the animals on Nov. 5 on Facebook, saying that it was aware of the markings and it had tried to locate the turtles — but they had “evaded capture.”

“Our Animal Control Officers will check their typical sunning spots from time to time in the hope of capturing them for a quick cleanup and health check,” the Renton Police Department said. “Thank you for everybody's concern.”

Days later, police said the two turtles had been located, adding that the animals will be rehabilitated, have their shells conditioned and will be placed in a “safe environment.”

Authorities think the animals had been released into the area, as they are not native to the park’s Lake Washington.

The apparent swastikas on the turtles’ shells, commonly associated with Nazis, prompted residents, activists and anti-hate organizations to hold a “Rally Against Hate” on Saturday at the park, according to the Seattle Times.

“While it’s hard to know the intention or what the perpetrator had in mind, it seems pretty clear to us what the symbol means,” Miri Cypers, the regional director for the Anti-Defamation League, told the newspaper. “I think it’s a really sad and unfortunate act. Unfortunately, anti-Semitic vandalism is becoming all too common in this climate.”

Police were not actively investigating the incident, as painting the animals would not fall under state law for cruelty to animals unless it caused them harm, the paper reported, citing police.