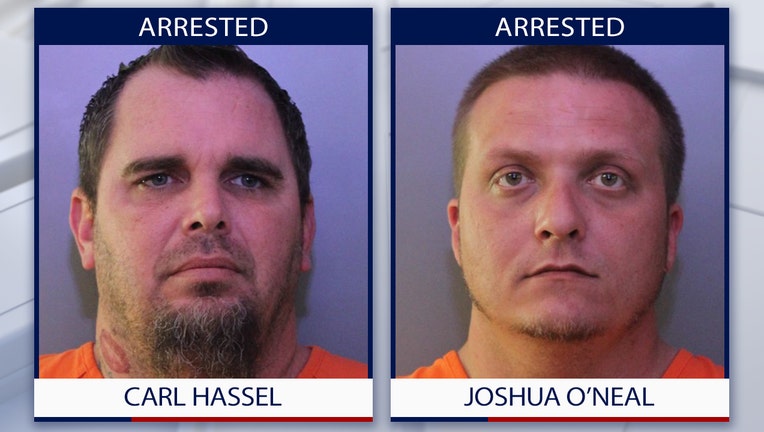 LAKELAND, Fla. - Lakeland police arrested Carl Hassel, 39, and Joshua O’Neal, 33, for grand theft and exploitation of the elderly after they allegedly charged a woman in her 70s hundreds of dollars for work that was not completed.

Police said the victim hired X-treme Air & Home Care to clean her air conditioning ducts, but when technicians Hassel and O’Neal began the work they allegedly told her that a lot more work needed to be done and it would cost more than the initial agreed-upon price of $100. The men allegedly told her that they could perform the necessary work for and extra $1,900, but the victim said she couldn’t afford it. They asked how much she could afford and she said $800, but would have to leave to withdraw the additional money from her pension funds.

According to police, Hassel agreed to perform the additional cleaning services for $800 and told the victim the work would be done “off the books.”

When the men left her home, the victim started examining their work and said it appeared as though nothing was cleaned. She thought she had been scammed and called law enforcement.

Detectives responded to her home and agreed that the air ducts did not appear to have been cleaned. They reached out to a licensed HVAC inspector and expert witness for the Attorney General’s Office to conduct an inspection of the ductwork and components of the air conditioning system. The expert agreed that the system was not cleaned to national industry standards, and the air handler was in such an extreme state of disrepair that there would be no purpose in cleaning the ductwork without restoring the unit.

During the investigation, it was discovered that X-treme Air & Home Care was placing ads in coupon books, advertising $9.00 per duct cleaning specials, and 15% discounts for military, seniors, and expectant mothers.

The owner of X-treme Air & Home Care, James Courdry, was also charged with contracting without a license and placing misleading advertisements.
Anyone who may have had a similar incident with X-treme Air is asked to contact Detective Charlie Bardwell at 863.834.8968 or Charlie.bardwell@lakelandgov.net.