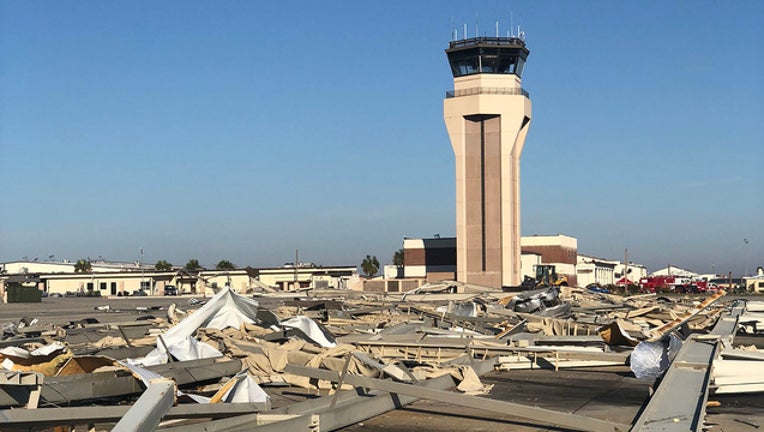 Hangers once used to keep aircraft out of the elements now lie scattered across the flight line following Hurricane Michael on October 10, 2018. U.S. Air Force photo.

PANAMA CITY, Fla. (NSF) - A "bigger and more active" Tyndall Air Force Base could emerge after the facility was ravaged 10 months ago by Hurricane Michael --- assuming federal money and squadron plans remain on schedule.

Col. Brian Laidlaw, commander of the 325th Fighter Wing Air Combat Command at the Northwest Florida base, said Wednesday a $3 billion recovery plan recently submitted to Congress will take five to seven years to complete. But he said officials remain optimistic as restoration timelines have been met or exceeded so far and nearly 75 percent of the personnel is back doing assigned missions.

"A lot of things that we have done for a long time at Tyndall we will continue to do," Laidlaw told U.S. Sen. Marco Rubio, R-Fla., during a hearing at Gulf Coast State College about the impact of Hurricane Michael on small businesses and workforce housing.

Rubio noted the economic damage to Homestead caused by Hurricane Andrew in 1992, including the loss of a Major League Baseball spring training facility and a downgrade of Homestead Air Force Base. He said the Tyndall recovery needs Congress to get a spending bill completed in September.

"If what the Air Force is asking for happens, Tyndall won't just be as good as it used to be, it's going to be better," Rubio said.

Designated funding would also get rid of lingering uncertainty about the base's future.

"It's not just about arguing, ‘Will Tyndall still be here?' Tyndall will be bigger and more active than it used to be," Rubio said. "And it will have a crucial role for our national security that makes it the place that you can't get rid of it."

That would be a big plus for a region that sustained massive damage in the Category 5 Hurricane Michael, which made landfall Oct. 10 in Mexico Beach. Before the storm, the base employed about 11,000 military and civilian workers and was estimated to have an economic impact of $596 million a year.

Laidlaw said the influx of construction work should have about $1 billion worth of economic impact in the region this year.

PREVIOUS: After hurricane, Tyndall Air Force Base slowly rebuilds with eyes on the future

Overall, the storm caused 50 deaths, led to more than $6.9 billion in insured losses and caused $1.49 billion in damages to Florida agriculture, mostly to the timber industry.

At Tyndall outside Panama City, a big factor in the optimism is support for plans to bring three squadrons of F-35 stealth fighter jets to the base by 2023, replacing F-22s that were moved out following the storm.

Vice President Mike Pence tweeted last week that plans remain in place for the base to receive the three F-35 squadrons.

"After Hurricane Michael destroyed Tyndall Air Force Base in October, I promised, on behalf of Donald Trump, that our admin would rebuild team Tyndall," Pence tweeted on Aug. 6. "I'm proud to announce we can rebuild the F35s by 2023! This is how we keep America's great Air Force lethal and ready!"

The F-35 squadrons, along with efforts to land the MQ-9 Reaper Wing, would each add between 1,200 and 1,800 additional employees, Laidlaw said.

Either would replace what was lost with the relocation of the F-22s.

As part of the rebuilding effort and federal funding request, Laidlaw said the work includes hurricane-resilient designs implemented throughout South Florida after Andrew.

"We have baked all of those lessons learned into the project list that we built," Laidlaw said.