Thousands protest in climate march as COP26 continues in Scotland

Police helicopters buzzed above Glasgow, Scotland for a second day of protests outside the U.N. climate summit. (Credit: @ruthcartertuam via Storyful)

GLASGOW, Scotland (AP) - Tens of thousands of climate activists marched Saturday through the Scottish city hosting the U.N. climate summit, physically close to the global negotiators inside but separated by a vast gulf in expectations, with frustrated marchers increasingly dismissive of the talks and demanding immediate action instead to slow global warming.

The mood at the protest in Glasgow was upbeat despite the anger and bursts of rain. Similar protests were also held in London, Amsterdam, Paris, Dublin, Copenhagen, Zurich and Istanbul.

Many of the marchers condemned government leaders for failing to produce the fast action they say is needed, with some echoing activist Greta Thunberg's view Friday that the talks were just more "blah, blah, blah."

"We're having these conversations, but there's no policies to actually back them," said Daze Aghaji, a marcher from London at the Glasgow demonstration, shouting over the steady beat of the drums.

"And on top of that, the real people should be in the room," Aghaji said, referring to complaints that the Glasgow summit has too sharply limited participation by the public. "How are we expecting to make decent policy when the people who are the stakeholders of this aren't even present in the room?"

Marchers held signs with messages including "Code Red for Humanity," "Stop big polluters," "COP26, we are watching you" or simply "I’m angry." One sign asked "If not you, then who? If not now, then when?"

Megan McClellan, 24, of Glasgow said she doubted that climate negotiators were listening.

"This is a very easy thing for them to ignore. They’re nice and comfortable" inside the summit conference center, she said, which is ringed by steel fences.

But her friend Lucette Wood, 30, of Edinburgh disagreed. 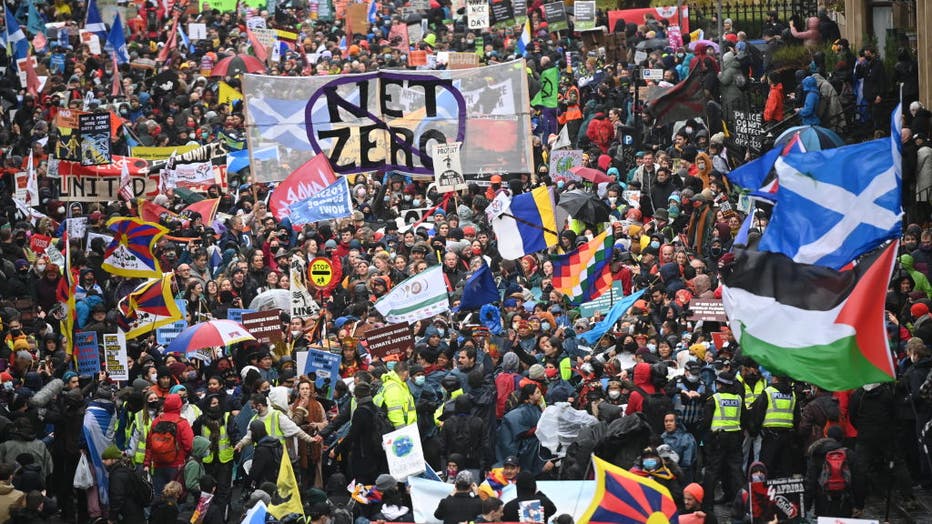 "They might not actually do anything about it but they pretend that they do ... and they will just put it off for 20-30 years," Wood said.

Thunberg's dismissive talk of the two-week climate summit — which has another week to go — has touched a nerve inside and outside the summit site. Government leaders and negotiators insist they are as equally aware as the marchers of the urgency of their task, with time slipping away to rein in pollution from fossil fuels before the Earth faces much higher levels of warming.

Jamila Khatoon from Pakistan carried a sign in Glasgow about three glaciers in her region that may disappear because of climate change.

"The glaciers are melting," Khatoon said. "Villages are drowning. Nobody is doing anything."

Elaine Knox, 69 and William Oliphant, 60, both from Glasgow, said they were attending the rally for the next generations.

British Prime Minister Boris Johnson, whose country is hosting the talks, has defended the progress made by governments in raising promises of emissions cuts and climate financing, while acknowledging the public's demands that more needs to be done.

At the huge U.N. conference venue, negotiators spent a seventh straight day haggling over draft agreements that can be passed to government ministers for political approval next week. Among the issues under discussion were a fresh commitment to capping global warming at 1.5 degrees Celsius (2.7 degrees Fahrenheit), pushing countries to review their efforts more frequently to increase the pressure for deeper cuts, and providing more financial support for poor nations to adapt to climate change.

"I think we have overall made progress," Sharma said Saturday. "I think people have been constructive in the negotiating rooms."

President Joe Biden said the United States and other developed nations bear much of the responsibility for climate change during an address at COP26 on Nov. 1, 2021, in Glasgow, Scotland.

"We are getting to the point where the rubber hits the road, where we’re going to have to make, you know, tough decisions" by government officials, he said. "I don’t, certainly do not, underestimate the difficulty of the task which is ahead of us."

Saturday’s marches drew a range of participants and ages, a day after tens of thousands of young people in the Fridays for Future movement protested outside the Glasgow conference’s fences. Thunberg’s mix of school strikes, blunt and impatient talk about government excuses, and mass demonstrations have galvanized climate protests since 2018, especially in Europe.

The climate protest movement — and the worsening droughts, storms, floods, wildfires and other disasters around the world this year — have brought home to many the accelerating damage of global warming and have kept the pressure on governments for stronger and faster action to reduce fossil fuel emissions.

Elizabeth May, a Canadian member of parliament and 16-time participant in the U.N. climate talks, said the protests are making a difference.

"Most of the people on the inside are here in their hearts and sometimes physically," May said, who joined the Glasgow demonstrators Saturday.

In central London, thousands of climate protesters marched from the Bank of England to Trafalgar Square. Protester Sue Hampton, 64, said everyone is at risk and all generations need to press for action.

"We can’t let the young people do all the work here. We’ve all got to do it together," she said.

In Istanbul, climate protesters brought their children to the demonstration Saturday, emphasizing the impact of global warming on future generations.

"I want my children to live on a beautiful planet," said Kadriye Basut, 52, in Istanbul.

Danica Kirka in London, Seth Borenstein in Glasgow and Andrew Wilks in Istanbul contributed to this report.