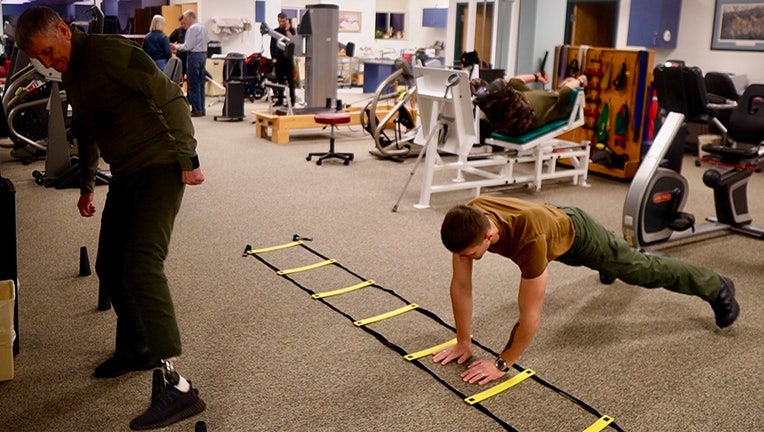 A Ukrainian soldier, Dmytro, does pushups at the Novacare Rehabilitation Center in Crystal, Minnesota. (Jared Goyette/FOX 9)

CRYSTAL, Minn. (FOX 9) - It’s a Wednesday evening at the Novacare rehabilitation clinic in Crystal, Minnesota, and the latest group of Ukrainian soldiers who've come to be fit with prosthetics are hard at work.

Dmytro, 25, a slim young man from the Mykolaiv region who is a member of the Ukrainian Special Operation Forces, does rapid-fire pushups, placing his hands in the boxes of an agility ladder as he shifts to his left. Moving his legs in a scissor motion, he leads with his left foot and brings his prosthetic right leg next to it before moving his left foot again, balancing as he prepares to take the next step.

Around him, other soldiers move through their own exercises: a man with short gray hair steps sideways over cones, bringing his legs high; a soldier in the back of the room practices going up and down model stairs; yet another does leg presses.

Dmytro is focused, moving quickly and precisely – a reflection of the near-continuous training he has received in the Ukrainian military since he joined in 2014. He is one of 22 soldiers who have been fitted with prosthetics in Minnesota by the Protez Foundation. Founded in May by the Ukrainian-born local prosthetist Yakov Gradinar, the nonprofit has grown exponentially since, with the help of donations from around the world.

Tonight, Dmytro is working hard with one goal in mind.

Like most of the other Ukrainian soldiers who have come to Minnesota to be fitted with prosthetics, Dmytro intends to go back to his homeland and continue to serve in the army. He wants to do whatever he can to help repel the Russian invasion that the United Nations says has caused at least 16,246 civilian casualties since the war began in February, with 6,490 killed and 9,972 injured, according to the United Nations.

"My main goal is to get back to our community, to our country, and be helpful in this time," he told FOX 9 through a translator. "I understand that I may not be on the front line, but I can be helpful because I know a lot that I learned through seven years of war going on in Ukraine."

Dmytro was on patrol with his unit in July when he stepped on a landmine. He found out about Protez via social media but was reluctant to apply at first. Going to the United States for medical treatment didn’t seem like a realistic option — even though the foundation covers the cost of travel, lodging and treatment for patients.

His wife was persistent, however.

"She was filtering a lot of information for me on social media, and she was pushing for me to get to the United States and get good prosthetic care," he said

The Minnesota nonprofit Protez Foundation is helping Ukrainians who lost their limbs in the war get the prosthetics they need.

Roman Matvisiv, an officer in the Ukrainian army who is from the city of Drohobych, in the Lviv region, has a similar story.

He served in the 14th Mechanized Brigade, which played an important role in the defense of Kyiv at the start of the war, and, more recently, the retaking of Kharkiv. His unit was relieving another unit at the front line in May when they came under mortar attack. Matvisiv was knocked out by a blast and woke up days later in the hospital.

Like Dmytro, Matvisiv found out about Protez through social media and was reluctant to apply at first — but his girlfriend was persistent and convinced him to fill out the form. About six months later, on Sunday, Oct. 30, he was arriving at the Minneapolis-St. Paul International Airport with Dmytro and two other soldiers. They were greeted by a crowd of Ukrainian Americans and supporters who sang the Ukrainian national anthem.

Matvisiv said he was grateful for the chance to be part of the program, as he could get better and quicker care than would be available to him in Ukraine.

"I will continue my service, not at the front, but at the training centers," he said. 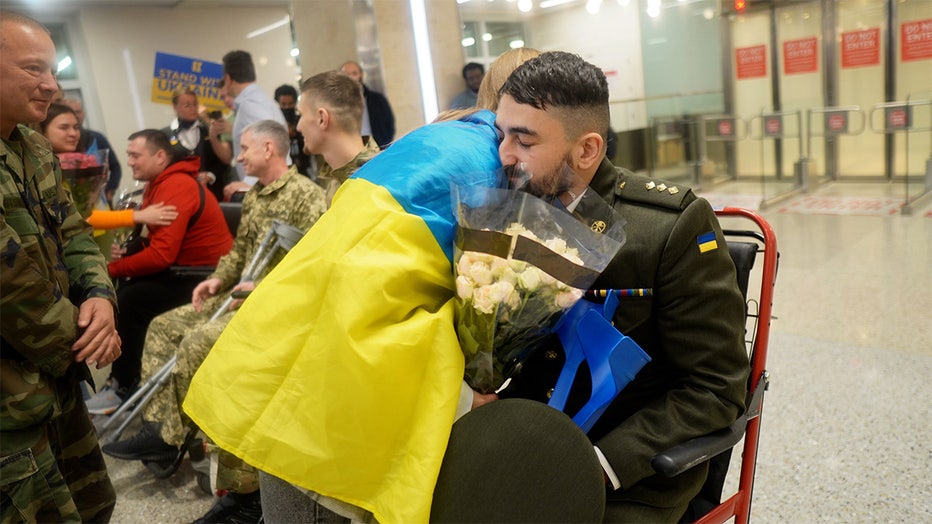 Roman Matvisiv, an officer in the Ukrainian military, is embraced by a supporter after arriving at the Minneapolis-St. Paul airport on Sunday, Oct. 28. (Jared Goyette / FOX 9)

Gradinar says at least one of the Ukrainian soldiers that Protez fitted with a prosthetic has gone back to the front lines. He showed FOX 9 a Facebook video recently posted by a soldier in Ukraine. It shows the Mykola, a member of the Ukrainian Special Forces, marching uphill through a densely wooded area while in uniform and with a rifle in hand. As he reaches the camera, he pauses and pulls up his right pant leg to show the prosthetic limb he obtained in Minnesota with Protez. 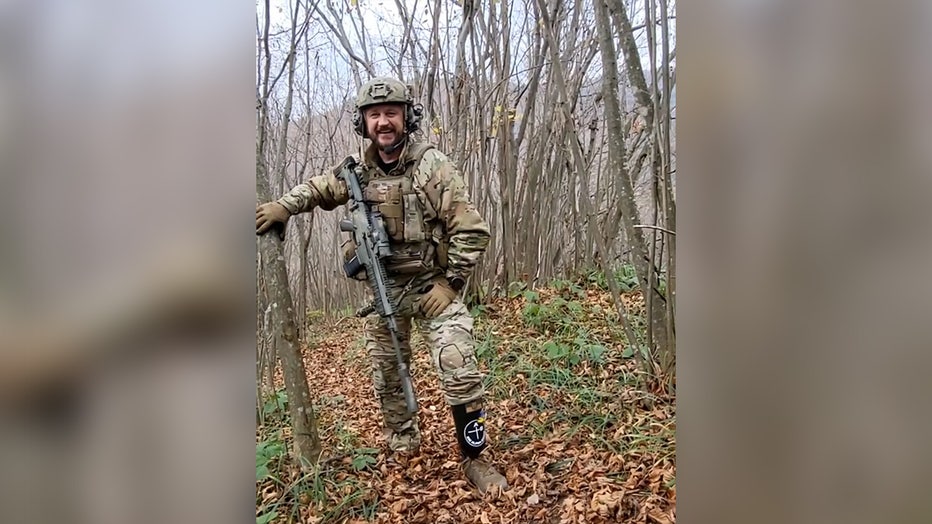 For Dmytro, the decision to stay in the army after getting a prosthetic comes down to a sense of duty and responsibility. He thinks of the times his family and other Ukrainians have had to take shelter during Russian air raids, as has happened recently in the capital Kyiv and other cities during Russian airstrikes on Ukraine's electric and heating grid.

"I go back so that every person in my country, whether they be in my family or anyone else, can stop hiding in the basement. And whatever I can do to help make that happen, I will do it," he says. 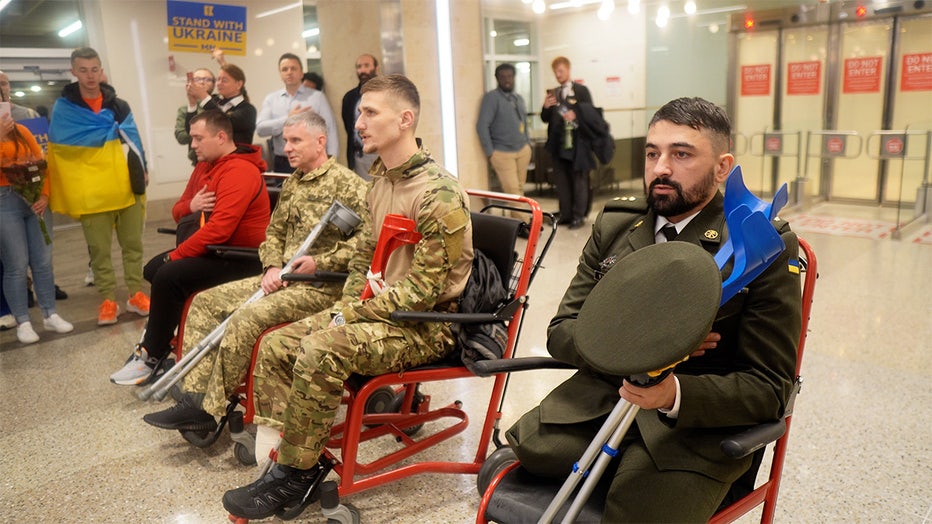 Ukrainian soldiers, Roman Matvisiv (left) and Dmytro, are greeted by Ukranian-Americans and supporters as they arrive at the Minneapolis-St. Paul airport around midnight on Sunday, Oct. 28. Both would later be fitted with prosthetics from the Protez