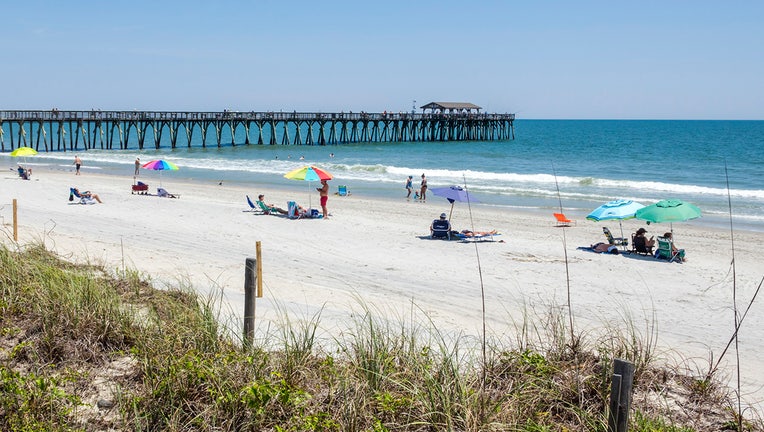 GARDEN CITY, S.C. - A beachgoer was killed Wednesday after a loose beach umbrella impaled her in the chest on a South Carolina beach, authorities said.

The umbrella, which was on the property of a nearby hotel, was blown from its anchoring by the wind around 12:40 p.m. and hit Tammy Perreault while she was at a Garden City beach, Horry County Chief Deputy Coroner Tamara Willard told news outlets.

Perreault, 63, died about an hour later at the hospital from chest trauma, Willard said.

Beach umbrellas have a spiked end to help push them into the sand and their wide canopy allows them to get caught up in a strong wind if they are not anchored properly, the U.S. Consumer Product Safety Commission said.

The federal agency estimates about 3,000 people are injured by beach umbrellas every year.

U.S. Sens. Tim Kaine and Mark Warner of Virginia asked the safety agency to review safety rules for beach umbrellas and start a safety campaign after a Virginia woman was killed by an umbrella in 2016.

Umbrellas fly above beach during storm

A recent storm sent beach umbrellas flying above the sand and sea at Bethany Beach in Delaware.

This latest incident happened just before 1 p.m., when the daily afternoon sea breeze was likely at its strongest, according to FOX Weather.

A nearby weather observation site reported wind gusts of upwards of 30 mph, which is typical this time of year, the National Weather Service said.

Strong sea breezes are common along the beaches of the Southeast and the Gulf Coast when the land’s temperature heats up greater than the temperature of the nearby water.

The difference in temperature and associated pressure causes a mini front to develop and work inland, which helps to cool coastal and inland areas.

The Associated Press and FOX Weather contributed to this report.