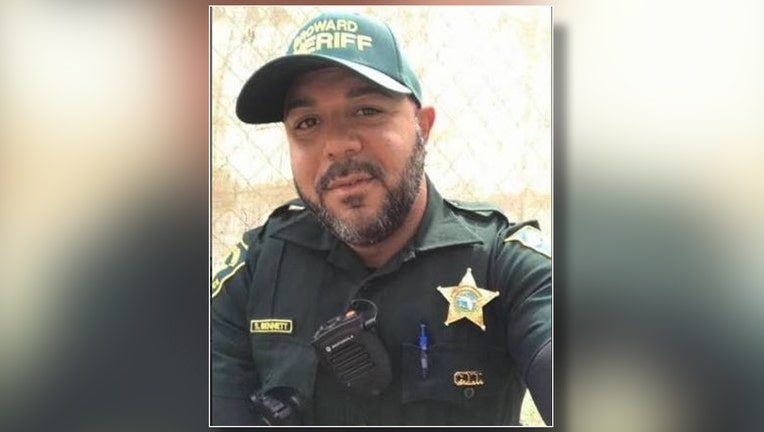 DAVIE, Fla. - The Florida town of Davie has placed its police chief on administrative leave after he was accused by officers of saying a sheriff's deputy died of COVID-19 because he was a “homosexual who attended homosexual sexual events.”

The Fort Lauderdale suburb announced late Saturday that Chief Dale Engle will be on leave while the allegations made by the Fraternal Order of Police union are investigated. Richard Lemack, administrator for the town of 100,000 residents, said in a statement he would have no further comment.

The union said in a letter to Lemack that Engle “allegedly yelled about a ‘backstory’ which proclaimed that Deputy Bennett contracted and died from the virus because he was a ’homosexual who attended homosexual sexual events.'”

“He intimated that it was because of the homosexual lifestyle that Deputy Bennett first contracted a serious underlying disease which aggravated the COVID-19 virus and lead to his death," the letter continued.

Engle later sent an email to the staff saying, "My intent was to provide as much information to personnel as possible. If my comments were taken out of context, they were not intended to be derogatory.”

A working phone number for Engle could not be found Sunday and he did not immediately respond to an email sent to a personal account. Engle, 56, has been chief for a year.

Tommy Reyes, the president of Miami’s Fraternal Order of Police, told the Herald that Bennett was his friend and called Engle’s alleged comments “disrespectful" to the deputy's family, friends and fiance. He was engaged to marry in December.

“It was disrespectful to the entire LGBTQ community and his own officers,” Reyes said. “He should be ashamed of himself for his lack of professionalism and compassion for others.”

Bennett's death has already roiled the Broward Sheriff's Office. Sheriff Gregory Tony on Friday suspended the president of the deputies union, Jeff Bell, after Bell accused the sheriff in a newspaper column of not providing enough protective equipment.

Tony accused Bell of making false statements, having corrupt practices, exhibiting conduct that is unbecoming and not using proper discretion.

Bell's attorney said Bell was suspended “for doing his job” by standing up for his members.