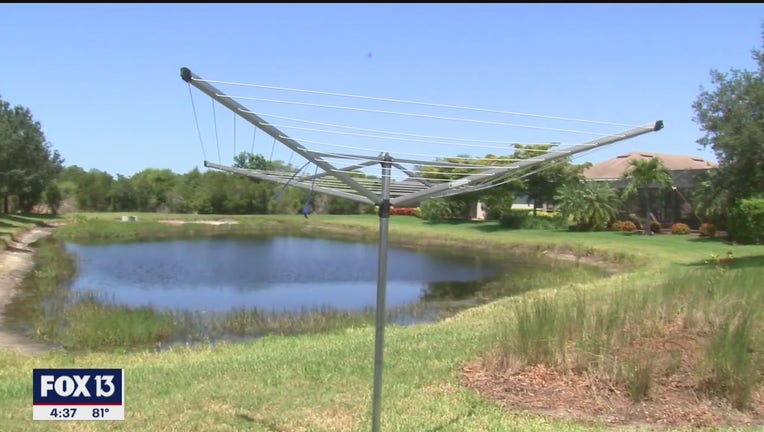 "The fresh air makes the clothes smell great. It’s just a wonderful thing to do and it's also helping the environment," she told FOX 13 News.

In 2018, she submitted paperwork to the Verona Reserve Homeowners Association for approval to install a clothesline, which is actually protected by Florida law.

“You're allowed to basically place a solar panel or line dryer in the place where it’s most efficient, where you can make the most use of the sun," explained Wuetcher's lawyer, James Potts Sr.

Wuetcher believes that place on her property is a specific spot in her backyard.

"In the morning, the sun is in that spot, but it’s not closer to the house. The other thing is, if I put it too close to the house, sheets or towels will rub up against the lanai screen and get dirty," she said.

Per Florida law, the HOA approved the request to install the line, but then rescinded it.

The location of the clothesline -- the perfect, sunny spot in Wuetcher's backyard -- is visible from the road, which the HOA does not like.

"In February of 2019, I got a violation letter saying, 'You didn't do what you were supposed to do. We can see it from the street. You have to move it,'" Denise recalled.

Records show the fines accumulated up to the maximum allowed, $2,500.

Wuetcher filed a lawsuit against the HOA, arguing she's not breaking a specific rule.

"[The HOA] have not properly referenced, or put us on notice, precisely which covenant or which bylaw we have broken," said Potts.

Now, the HOA is trying to raise funds to file a counterclaim against Wuetcher, calling her out by name in paperwork delivered to every Verona Reserve household.

"For lack of a better term, I think it's a hit piece," said Potts. "They are trying to make her as unpopular as they possibly can in order to accomplish their objectives."

Two years into the legal battle, Wuetcher said she isn't about to give up now.

"I feel it's important to not let them run over us. If I don't stand up for this, what's the next thing they are going to do?" she asked.

Lighthouse Property Management operates the Verona Reserve Homeowners Association. FOX 13 has reached out to them multiple times for comment and received no comment.