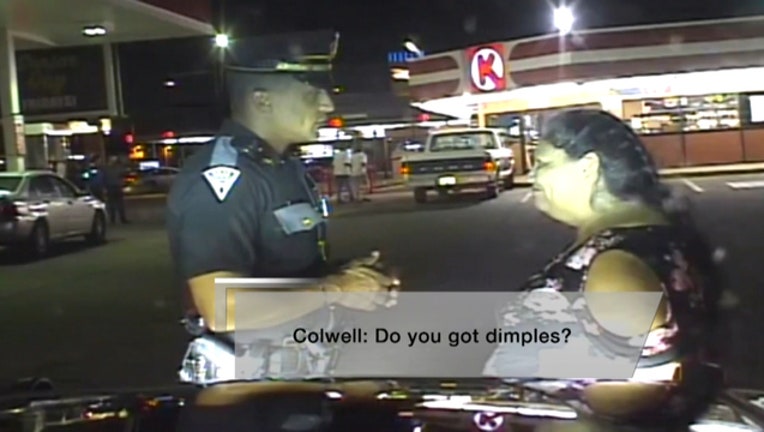 ALBUQUERQUE, N.M. (KRQE) - A grandmother was caught on camera flirting with an arresting officer after she was stopped for suspicion of driving while intoxicated.

In September, police pulled over Brenda Colwell in the Circle K parking lot at Central Avenue and San Pedro Drive in Albuquerque. KRQE reports her 6-year-old grandson was sitting in the back of the car.

Dashcam video was recently released by New Mexico State Police, where Colwell can be heard telling State Police Officer Toby LaFave, “You are so gorgeous.”

The 57-year-old woman said she was a little buzzed from one drink, but police said she blew a 0.13 in her breathalyzer test. In New Mexico, it is illegal for an adult to drive with a blood alcohol concentration of 0.08 or higher.

LaFaze heard asking in the dashcam video, “Kind of buzzed?”

“What do you mean by that?” LaFaze asked.

Throughout the DWI stop, Colwell can be heard giggling. She also asked Colwell if he had dimples.
KRQE reports that Officer LaFaze attempted to do field sobriety tests with her, but she wouldn’t take him seriously.

"Don't act like a fool in front of your grandson. How many times do I have to tell you? You are embarrassing him," Officer LaFave said.

After she was cuffed, she said to LaFave, “At first I thought you were cute.”

He responded with, “Thank you I appreciate that,” and Colwell then said, “You’re not.”

She was arrested on child abuse and DWI charges. The child’s mother picked up the boy during the DWI stop, KRQE reports.