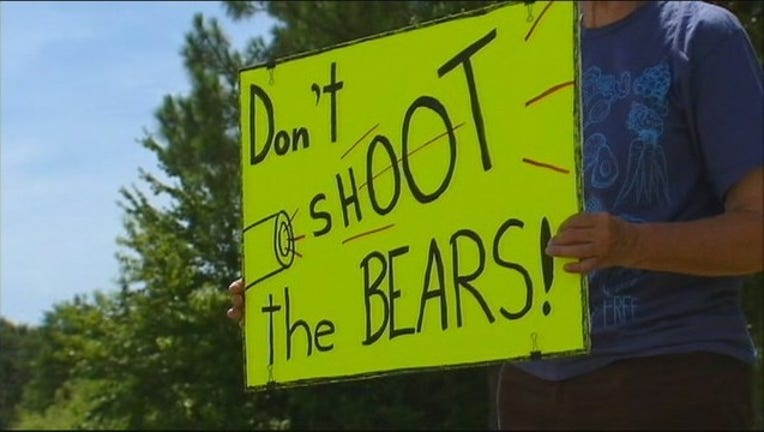 They held signs in front of the Florida Fish and Wildlife office in Lakeland and other offices around the state to oppose the state's proposed bear hunt tentatively scheduled for this fall.

"There are too few bears," said Marie Galbraith, a member of Florida Voices for Animals. "I am totally against this hunt because they will go extinct eventually."

FWC is supporting a limited hunt because it says the black bear population is too big and that's causing problems.

After the population dropped in the 1970's because of hunting and destruction of habitat, the state decided to protect bears. Scientists say there are now about 3,000 in Florida.

They are concerned that if the population continues to grow, so will the problems they cause. In the last year, there have been a number of close calls with bears. In Orange County, one wandered into a neighborhood and killed a dog.

Another one bit a 68 year-old woman in the arm.

The head of the FWC says a hunt is the only way to manage the population and keep the bears in check.

"It is the only effective and responsible way to reduce population levels," FWC Executive Director Nick Wiley told FOX 13 on Monday.

FWC commissioners are expect to give a thumbs up to the hunt during a meeting in Sarasota. The goal would be for hunters to take out up to 320 bears. The hunt is tentative scheduled for the last week in October. A license would cost a Florida resident $100. Out of state hunters would pay $300.