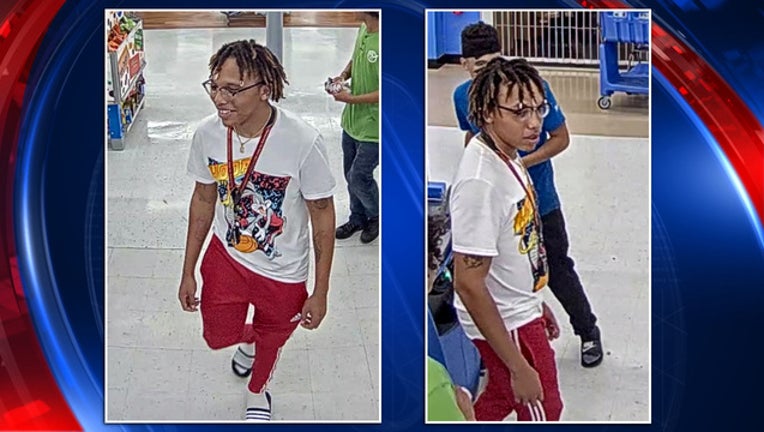 These photos from Walmart show Davis just prior to the initial encounter at Cambridge Apartments, WHPD says.

WINTER HAVEN, Fla. (FOX 13) - Police in Winter Haven are still trying to track down the driver who nearly ran over an officer, then fled from the scene after his passenger was shot.

According to police, it was just after 2 a.m. Sunday when officers were called to the Cambridge Square Apartments for a suspicious vehicle. They found a silver Volkswagen Passat with four people inside, but when they tried to talk to the driver, they say he started "acting strangely."

The driver, later identified as Douglas Davis Jr., reached down under his seat and then hit the car's gas pedal, sending the sedan towards an officer. That officer opened fire, hitting a backseat passenger in the shoulder.

The car then sped off, but jumped a curb at the corner of Avenue F SW and Fourth Street SE. Three people bailed out, leaving the injured passenger inside. Officers say they found a teenage girl hiding in nearby bushes, while a teenage boy later turned himself in.

Davis, though, has not been found and a warrant has now been issued for the 23-year-old's arrest.

The Winter Haven officer is on standard paid leave pending the outcome of an investigation.