A rally in support of Cuban protesters spilled into the busy traffic lanes of Dale Mabry Highway and I-275 Tuesday afternoon. Activists blocked traffic as they waved flags and demanded U.S. action.

TAMPA, Fla. - As anti-Cuban government protests take place in major cities across the state of Florida, Gov. Ron DeSantis says the state will not tolerate demonstrations that shut down roadways.

Back in April, DeSantis signed a controversial "anti-riot" law that enhances penalties against protesters who turn violent and creates new criminal penalties for those who organize demonstrations that get out of hand. But provisions of the law also make it a felony to block some roadways -- and gives immunity to people who drive through crowds of protesters blocking a road.

The bill was introduced after last summer’s protests for racial justice during which some Black Lives Matter protesters were met by police with tear gas and arrests when they took to the streets for days at a time.

During a roundtable discussion about Cuba in Miami on Tuesday, Gov. Ron DeSantis said the demonstrations in South Florida, and other parts of the state, were "fundamentally different than what we saw last summer."

But after multiple anti-Cuban government protests blocked roads and highways in cities including Tampa and Miami, DeSantis addressed them during a press conference Thursday in Miami.

He said that though he encourages and supports peaceful demonstrations, protesters cannot cross the line and put people in danger by blocking roads. 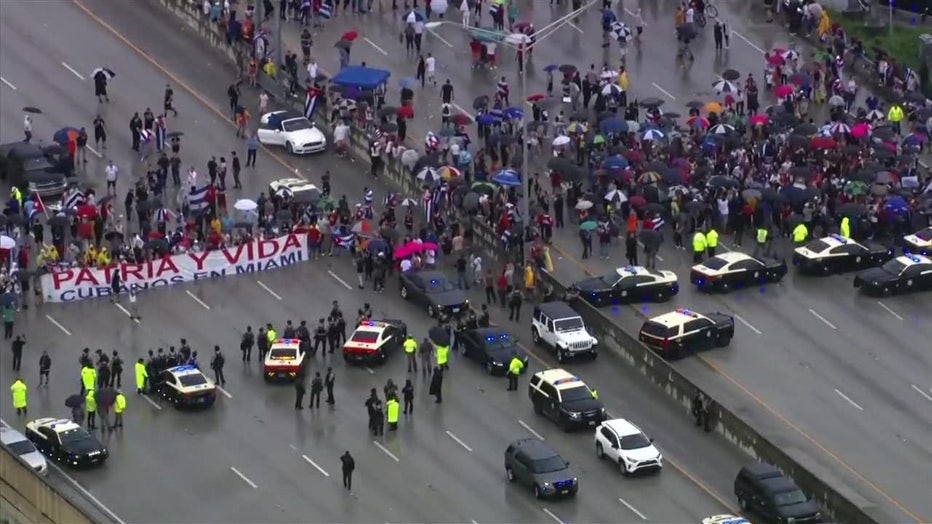 "We can't have that. It's dangerous for you to be shutting down a thoroughfare," the governor said. "You're also putting other people in jeopardy. You don't know if any emergency vehicle needs to get somewhere. And then obviously it's just disrespectful to make people stand in traffic."

DeSantis added that blocking roadways had been illegal in Florida prior to the passage of the anti-riot law.