Florida's governor called on the White House to ensure that Cubans had internet access and other necessities.

TALLAHASSEE, Fla. - Gov. Ron DeSantis told young members of Cuba’s military to "live in the history books" by overthrowing their nation’s communist leadership, as he pushed President Joe Biden to bring Wi-Fi access back to people protesting on the island nation.

DeSantis, appearing in Miami on Thursday, reiterated his request that the White House allow Florida to restore internet access to Cuba, amid widespread demonstrations over a deepening economic crisis.

When asked if he would support "intervention" from the U.S. government into Cuba, the Republican governor suggested it would be better for members of the Cuban military to take action.

"The best role for the military is the Cuban military to realize that time is up. You can’t keep doing the bidding of a repressive dictatorship that is not governing with the consent of the governed," DeSantis, joined by Republican Congresswoman Maria Elvira Salazar and Federal Communications Commission member Brendan Carr at Thursday's midday press conference, told reporters.

The push for Biden to intervene has escalated after Cuban President Miguel Díaz-Canel reportedly shut off internet access to the island nation, located 90 miles south of Florida.

"Clearly, this is a dictatorship that has lost --- not that they ever had it --- but clearly, they don't have the consent of the governed now," DeSantis said. "And so, I think that the best thing would be for those military, particularly some of the younger military folks, to understand, you can really be heroic in this, you can play an instrumental role in founding a free Cuba, re-founding the country and a free republic. And that will be something that will help millions of people, and that will be something that will cause you to live in the history books."

DeSantis said the White House has yet to respond to his Wednesday request about restoration of internet access to the island.

In his letter, DeSantis noted that, without the internet, Cubans are unable to communicate to the rest of the globe --- and each other --- about what is happening on the ground.

"Technology exists to provide Internet access into Cuba remotely, using the innovation of American enterprise and the diverse industries here," DeSantis wrote. "Similar to the American efforts to broadcast radio into the Soviet Union during the Cold War in Europe, the federal government has a history of supporting the dissemination of information into Cuba for the Cuban people through Radio & Televisión Martí, located in Miami. In addition to sending information, however, our efforts must include creating a means for the Cuban people to speak to the world." 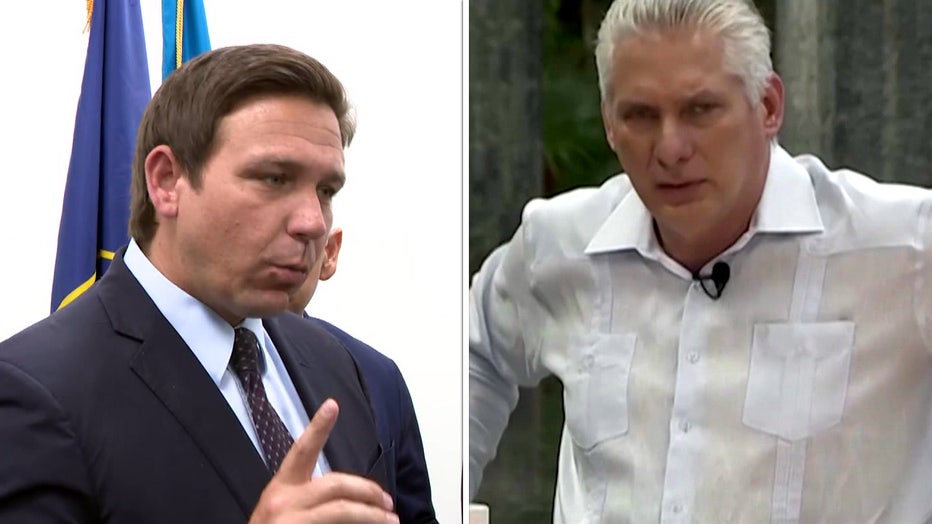 "The lack of internet access, as you know ... is a huge issue in Cuba and one that is very challenging for the people of Cuba so they can gain access to accurate information, they can correspond to family members and others," she said. "We’re certainly looking at that to see what can be done to address (the issue). But in terms of that specific proposal, I don’t have an assessment of that."

DeSantis and other allies of Cuban citizens urged the White House to respond quickly.

"We need their support," Salazar said. "And we need --- as the governor said -- the green light. If they do it now, we will do the rest."

Salazar also said that, if the federal government is unwilling to pay for the overseas connections, "the Cuban-American community will."

Carr, an appointee of former President Donald Trump, said the technology is available to restore internet access to the island. Suggestions about how to accomplish that goal include floating balloons that would enable Wi-Fi access and, as DeSantis suggested Thursday, using the U.S. Embassy in Havana.

"If President Biden says that he is behind this effort, I've no doubt that America free enterprise can move mountains and get this done," Carr said.

Meanwhile, the Democratic Progressive Caucus of Florida urged the White House to end the U.S.’s embargos on Cuba, which they maintained deprives the island’s citizens of resources and contributed to a deteriorating infrastructure and poor access to food and basic needs.

"While craven politicians like (U.S. Sen.) Marco Rubio and City of Miami Mayor Francis Suarez try to score cheap political points by calling for ridiculous Twitter bans and twisted fantasy airstrikes they know will never come, the DPCF demands the one thing that the United States has within its power to do right now that we know will immediately and measurably improve the lives of the Cuban people suffering on the island," the caucus stated in a release on Thursday.