TAMPA, Fla. - Looking at his GPS, Dontre Mosley knew exactly how long he had until he made it to Tampa General Hospital.

His friend Simone had gone into labor in the back seat, and Mosley realized he wasn’t going to make it to the emergency room in time.

“She was just going through pains, you know? And then the baby was here,” he said. “She started screaming Zulekha’s name. And then that was it. I looked back and saw the baby in her arms!”

At one of the interstate’s exits were Florida Highway Patrol troopers, on the clock for the protests downtown.

“When I pulled up to them, they were just surprised when I said I’d just had a baby delivered in the back of her car,” Mosley said. “They were in shock. When they came up to the car, they assisted, and kept her dry, and kept me dry, and then they let me cut the umbilical cord,"he recalled. "That was, um, different."

As an ambulance came for Simone, law enforcement officers gave Mosley an escort to the hospital.

Mosley says, despite heated tensions between the community and law enforcement the last several weeks, he knew that moment was all about baby Zulekha. 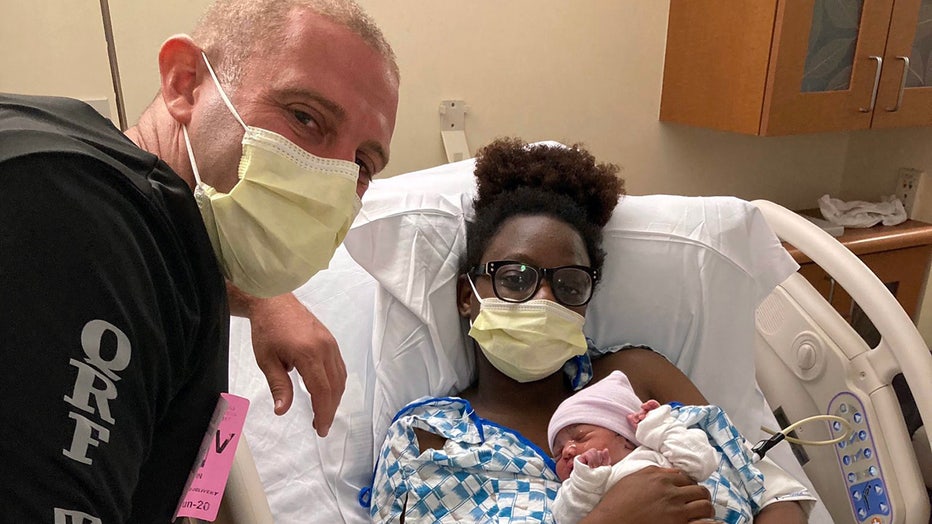 “They were there to assist me, too,” he said. “Even when I spoke to them, I was like, look, I know we got a lot going on between each other, but I would like your help, you know.”

Both mom and baby are happy and healthy, and Mosley says, and he has a new title: Godfather.