Veterans and Military Families Month was created with the intent of placing more focus on appreciating and supporting veterans and their families.

WASHINGTON, D.C. - For the third year in a row, President Donald Trump issued a proclamation declaring all of November as a month to honor American veterans and military families as an extension of Veterans Day.

Veterans and Military Families Month was created with the intent of placing more focus on appreciating and supporting veterans and their families, and many organizations use the opportunity to spread awareness.

The National Child Traumatic Stress Network distributes resources each November for military children and families, educators and civilian and non-civilian mental health providers to address the unique mental health needs of children who have parents serving actively or who are veterans.

“Military Families embody strength, resilience, and courage,” NTCSN said. “Care of military families and children sustains our fighting force, and strengthens the health, security, and safety of our nation's families and communities.” 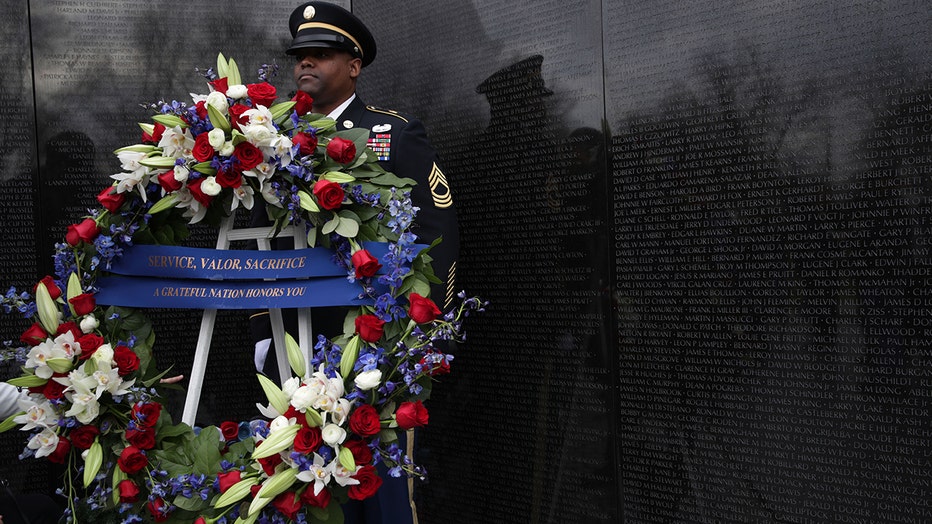 A wreath laid at Vietnam Veterans Memorial March 29, 2019 in Washington, DC. President Donald Trump has issued a proclamation declaring all of November as a month to honor American veterans and military families. (Alex Wong/Getty Images)

There are myriad other ways to honor and support the American military community this Veterans and Military Families Month, including visiting war memorials to educate yourself and your family, Adopt-a-Soldier for the Holidays, volunteering at local Veterans Service Organizations (such as the Red Cross or American Legion), donating professional services to military communities or visiting veterans receiving care in a VA hospital or nursing home.

The VA has created a list of veteran service organizations in need of support for anyone uncertain of where or how to contribute.

The president’s full proclamation can be read below:

The United States is a beacon of hope, freedom, and opportunity to people around the world. The Soldiers, Sailors, Airmen, Marines, and Coast Guardsmen who fight to defend our liberty embody courage, patriotism, and loyalty. These patriots safeguard the values that keep our great Nation strong. During National Veterans and Military Families Month, we honor and express our deep appreciation for these brave men and women and their families.

Throughout our Nation’s history, our military men and women have boldly answered the call of duty to defend our Nation’s independence and precious liberties, risking life and limb for their fellow Americans. At the inception of our Republic, General George Washington and his men struggled to keep the spark of faith and hope alive through the scourge of disease and the brutal winter months at Valley Forge. One hundred and forty years later during World War I, American service members shed blood in the trenches of Western Europe, leaving a legacy of heroism and courage under fire at places like Belleau Wood and the River Somme. Earlier this year, we commemorated the 75th anniversary of D-Day, when thousands of American heroes charged through a hail of machine gun fire and left their gallant mark on the pages of history. The courage of our men and women who served and fought during that war freed the world from the shroud of tyranny and ended the oppression of millions across the globe. In the decades since World War II, Americans have remained at the vanguard in defending freedom around the world, and our service members, veterans, and their families continue to spearhead this noble undertaking.

America’s military men and women and their families are vital to the security and prosperity of our Nation. We have a responsibility to protect and serve those who have made countless sacrifices for love of country. As President Lincoln once said: “Honor to the soldier and sailor everywhere, who bravely bears his country’s cause. Honor, also, to the citizen who cares for his brother in the field and serves, as best he can, the same cause.” We also recognize the integral role our more than 2.6 million military family members play in supporting our Armed Forces and contributing to their mission. While our military men and women are serving at home or overseas, it is our duty to provide their families with the resources they need to thrive in our communities. Accordingly, under my Administration, the Department of Defense has created programs for military families that support access to quality childcare and spousal employment and promote occupational licensure reciprocity between States.

We also recognize that our obligation to our military men and women does not end after their time in uniform. We are a Nation that leaves no American behind, and that includes our veterans and their family members. For this reason, I was pleased to sign into law the VA MISSION Act of 2018, which helps provide all veterans with access to trusted, high-quality healthcare. I have also made it a top priority of my Administration to address the tragedy of veteran suicide, establishing the President’s Roadmap to Empower Veterans and End a National Tragedy of Suicide (PREVENTS). The PREVENTS initiative will encourage a better understanding of veteran suicide and work across all levels of government and the private sector to implement strategies that will strengthen support networks for veterans and their families.

My Administration remains committed to providing our veterans and their families with the financial resources they have rightfully earned. Last year, we secured $201.1 billion in funding for the Department of Veterans Affairs (VA) — the most in the history of the VA — including $8.6 billion to support mental health services for veterans. Additionally, I recently directed the Department of Education to discharge some types of Federal student loans owed by totally and permanently disabled veterans. This unprecedented action lessens the financial burden for our seriously wounded warriors who have sacrificed so much for our country, and it underscores the appreciation and undying loyalty of the American people.Each warrior who fights for our Nation, along with their families, has earned our eternal gratitude, and I ask that all Americans thank and support them. Together, we rema in committed to fostering a national community of support for these brave heroes and their families.

NOW, THEREFORE, I, DONALD J. TRUMP, President of the United States of America, by virtue of the authority vested in me by the Constitution and the laws of the United States, do hereby proclaim November 2019 as National Veterans and Military Families Month. I encourage all communities, all sectors of society, and all Americans to acknowledge and honor the service, sacrifices, and contributions of veterans and military families for what they have done and for what they do every day to support our great Nation.

IN WITNESS WHEREOF, I have hereunto set my hand this thirty-first day of October, in the year of our Lord two thousand nineteen, and of the Independence of the United States of America the two hundred and forty-fourth.