TAMPA, Fla. - Two weeks before Election Day, it’s hard not to notice that the Biden campaign has the advantage in Sunshine State television advertising.

Biden’s ad machine took off around Labor Day, about the same time Trump’s ad team slowed down and cut back.

“After Labor Day the president’s camp suffered because they laid off the money,” pollster Matt Towery explained. “They didn’t run significant ads in Michigan or here in Florida or North Carolina. There were several states -- battleground states -- they should have been up and they went dark because they said they didn’t have the money.”

Advertising analytics tracks where campaigns are placing their TV ads and how much they’re spending to run them.  Through September, the data showed Biden’s camp outspent the Trump camp 2-1 in Florida and more than 2-1 in other battleground states.

Biden has maintained the advantage through October and in reservations through Election Day. 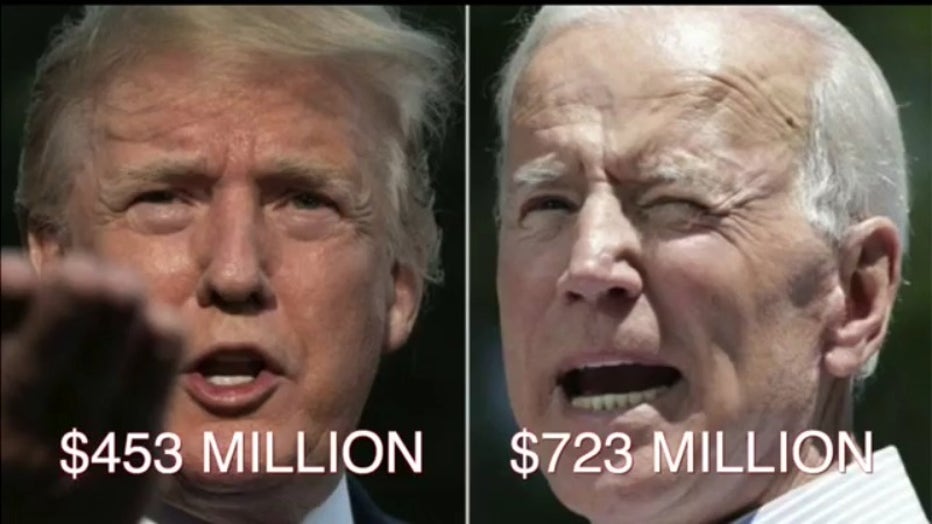 In Florida, Biden has spent $89 million on ads compared to $68 million for Trump.

That means you’re more likely to see the same Trump ads repeatedly, while Biden has a broader rotation of spots.

Biden has bought spots across more than 30 networks, making it more likely for most viewers to see them on different channels.

And he is concentrating much of his advertising on ‘access prime.’ That’s the period between the evening news and prime time shows that tend to draw an older audience. And as Biden blitzed those airwaves, he gained support among older voters.

Biden also spent more of his budget on national ads, meaning he paid for spots that aired in non-competitive states. But in doing that, he was also able to expand the swing-state map, putting states like Iowa, Ohio, and Texas in play.

With Election Day just 23 days away, both candidates have their sights set on Florida. It's a key state in presidential elections with 29 electoral votes up for grabs.

The Trump campaign is hoping for a better return on digital advertising. That’s where Team Trump has outspent Biden -- $174 million to $141 million -- spending more on YouTube and Facebook ads.

The campaign is taking a more targeted approach with TV and digital buys to motivate the president’s base.

Trump’s strategists say their strategy worked in 2016, and they expect it to work again.