Gas pumps are empty at stations up and down the East Coast, and even into northern Florida. But there is still plenty of gas in the Bay Area, and experts don't expect prices to jump.

TALLAHASSEE, Fla. - Petroleum industry officials and Gov. Ron DeSantis on Wednesday urged Floridians to avoid "panic buying" of gasoline amid a shutdown of the Colonial Pipeline, which carries fuel to the nation’s East Coast.

The shutdown began Friday after a ransomware attack. Motorists responded in some areas of Florida by rushing to the pump, creating long lines and causing some stores to sell out of gasoline.

"That hack occurred, and the pipeline is not necessarily in Florida, but obviously it affects our state. We have cleared the way for more fuel to be delivered," DeSantis said Wednesday.

The governor declared a state of emergency on Tuesday, relaxing truck-weight restrictions to get more fuel to stores. In the meantime, DeSantis said unnecessary gas purchases will exacerbate the problem.

"You do see shortages, but also, that’s compounded with some panic buying," DeSantis said. "Look, if you need gas, get it. But you don’t need to be hoarding it right now. That’s going to make it worse."

The American Petroleum Institute held a media briefing Wednesday, with experts on the supply chain saying claims of a gasoline "shortage" are a misnomer.

"This is not a gasoline shortage. We have an abundant supply of fuel. American refineries are running, we’re just working through the challenges of getting the fuel to each of the customers and communities served by the Colonial system," said Susan Grissom, chief industry analyst for the American Fuel and Petrochemical Manufacturers. 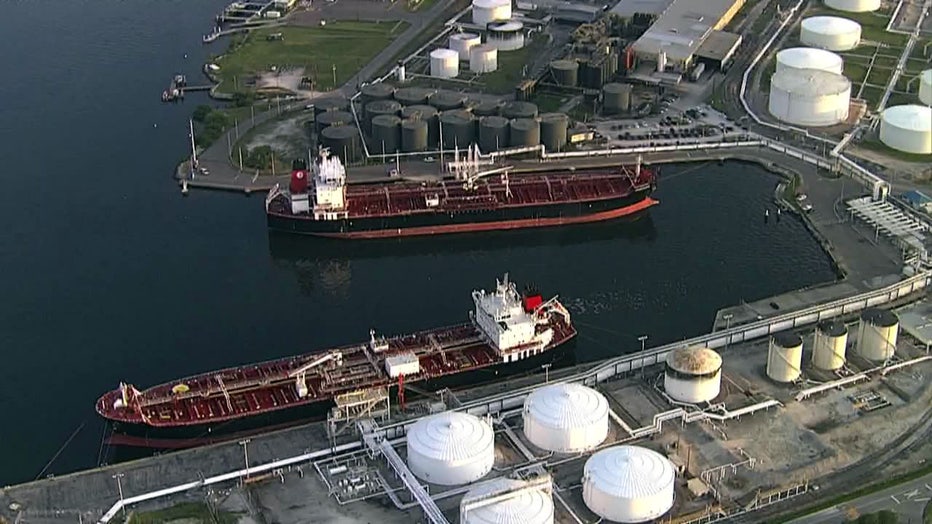 Tankers offload fuel at the Port of Tampa on Wednesday morning.

The AAA Auto Club issued a news release Wednesday that said Florida, for the most part, is not heavily reliant on the Colonial Pipeline. Ninety percent of Florida’s gasoline comes in through the state’s ports on cargo ships and is driven to retail pumps in tanker trucks, the organization said.

"This is not a refinery issue. Gasoline is still being made, and fuel continues sailing through Florida ports, regardless of whether Colonial Pipeline is operational," AAA spokesman Mark Jenkins said.

Still, convenience stores where most Americans fill their gas tanks have seen a rush of customers.

"We are seeing outages at stores that are not connected to the Colonial Pipeline," said Jeff Lenard, vice president of strategic industry initiatives for the National Association of Convenience Stores.

Why the Florida governor declared a state of emergency

According to the governor's office, DeSantis signed executive order 21-105 in response to a cyberattack on the pipeline, resulting in gas shortages across the eastern seaboard. The cyberattack disabled computer systems responsible for fuel production.

Federal and state waivers have been put in place to help get more gas to Florida pumps. On Tuesday, the U.S. Environmental Protection Agency issued a waiver to allow what is known as "winter blend" fuel to be sold.

"Now that the EPA has issued its waiver of federal regulations on gasoline standards, we took immediate action to ensure that remaining winter blend gasoline can make its way to gas stations and into Floridians’ cars," Fried said in a statement.