YOSEMITE, Calif. - A Yosemite National Park ranger has shared a heartfelt, heartbreaking story about a young bear that was struck and killed by a vehicle and her grieving mother that spent hours by her side hoping to wake her up.

"From behind me there’s a deep toned but soft sounding grunt. I immediately know what it is. It’s a vocalization, the kind sows (female bears) make to call to their cubs," the ranger shared in a Facebook post on Friday, along with a powerfully moving photo of the bear standing over her cub, which the ranger estimated was just months old.

"This bear is the mom, and she never left her cub," the ranger continued. 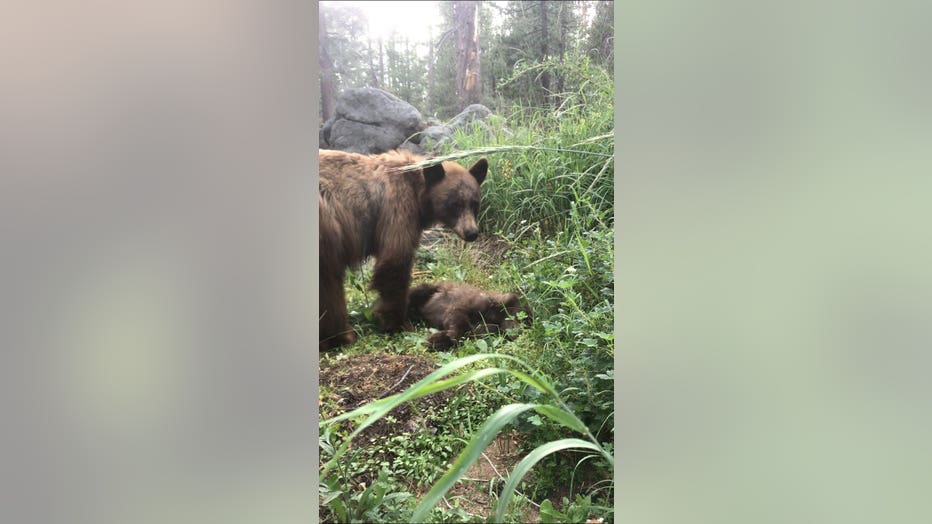 In a Facebook post on July 16, 2021, a Yosemite park ranger shared a moving account of responding to a dead bear cub and learning it was hit by a vehicle. The ranger said that the mother had been by its side for hours trying to wake her cub. (Yosemite National Park)

The post began with the ranger acknowledging how common bear killings were and how hardened rangers' hearts have become to these calls, due to the frequency of these events. Vehicle-bear collisions have been identified as one of the leading causes of death for black bears in Yosemite.

"‘Bear hit by vehicle, dead on the side of the road.’ Sadly, it’s become routine," the ranger wrote.

The post went on to explain the process of going into the "routine" of responding to the call, which had come in some five hours earlier.

Once on scene, the ranger went through the steps of taking care of what was expected to be the latest in a string of similar cases.

"My job here is easy, really: find the bear, move its body far away from the road to prevent any other animals from getting hit while scavenging on it, fill out a report, and collect samples and measurements for research," the post said. "Then I’m off on my way again with another number to add to the total of bears hit by vehicles this year—data we hope will help prevent future collisions. Pretty callous," the ranger wrote, adding, "However, the reality behind each of these numbers is not."

To the ranger, this case would prove to be a painful reminder that each killed bear logged into the system was more than just a number, more than just data as part of a report.

The ranger surveyed the scene, inspecting the surroundings, looking for the usual signs and scanning the road for blood that might reveal where the animal's body was.

"I try to remember how many times I’ve done this now and, truthfully, I don’t know," the writer pondered, while going through the motions, and noted, "This is not what any of us signs up for, but it’s a part of the job nonetheless."

And then a clue caught the ranger’s eyes: a vehicle part, presumably something that was once a section of an undercarriage. The training and vast experience prompted the ranger to the next move, to search the immediate area for a bear’s still body.

Two brothers from San Francisco say they have set a record for the longest highline ever walked in both Yosemite National Park and California. Earlier this month, they and a group of friends spent nearly a week stringing a single, 2,800-foot-long line from Taft Point west across a series of gulleys that plunge 1,600 feet. Highlining is high-altitude slacklining, in which a narrow strip of strong, nylon webbing — usually an inch wide and a few millimeters thick — is strung between two anchor points and serves as a kind of balance beam.

"I turn my gaze from the car part down the embankment on the side of the road and there it is," the post explained.

What the ranger found next, prompted a pause as the animal was much smaller than expected. "A cub," the ranger shared, describing the discovery. "Its tiny light brown body laying just feet from me and the road, nearly invisible to every passerby. It’s a new cub—couldn’t be much more than six months old, now balled up and lifeless under a small pine tree."

This call may have hit the ranger a little harder than the others, as the lifeless body was so small. "For a moment I lose track of time as I stand there staring at its tiny body," the writer explained, noting it didn’t take long to snap out of it and remember what needed to be done next. "...the sound of more cars whizzing by reminds me of my place and my role. I let out a deep sigh and continue on with my task."

But first, the ranger explained of being compelled to place the small cub in a different location before getting to the "task" of the job.

"I pick up the cub—it couldn’t be much more than 25 pounds—and begin carrying it off into the woods. I have no certain destination; I’m just walking until I can no longer hear the hiss of the road behind me," the writer recounted. "The least I can do is find it a nice place to be laid. I lay it down in the grass protected by one of the nearby logs and sit back on the log opposite of it, slightly relieved that it looks far more in place now than when I found it earlier."

As the ranger started getting to work, there in the quiet of the woods came a sudden and startling sound of a snapping stick. The ranger looked up to find a dark figure, its dark eyes staring back.

"It’s another bear. Surprised, I stand up quickly and the bear runs off into the brush," the ranger wrote, noting that the animal took a moment to look back once more before leaving completely.

The bear did eventually get out of sight, prompting the ranger to chalk it up to being just a coincidence and speculate that the bear might have been looking for food or perhaps the area was a common crossing for others of its kind.

But within minutes, the ranger would know that it was not just a coincidence, that the bear had intentionally and with purpose found her way there, seeking and hoping for only one thing. And the animal would return as part of that pursuit. The scene that unfolded was a powerful reminder of the important work Yosemite rangers and other conservationists do to try and protect the iconic park and its inhabitants.

When the bear returned, the ranger would be notified of her presence by the sad, heart-wrenching sound that she made as she called for her cub.

"I turn and look in its direction and there she is, the same bear from before intently staring back at me. It’s no coincidence. I can feel the callousness drain from my body," the writer recalled. "My heart sinks. It’s been nearly six hours and she still hasn’t given up on her cub. I can just imagine how many times she darted back and forth on that road in attempts to wake it."

The ranger detailed the emotional scene, explaining how the mother's calls to her cub continue, "sounding more pained each time." The ranger watched on saying it was impossible not to hope that in some miraculous event, the cub would wake up and respond back to her mama. "...but of course, nothing," the writer shared. "Now here I am, standing between a grieving mother and her child. I feel like a monster."

And the ranger decided it was time to leave. "I get up, quickly pack my bag, and get out of there… even though my task is not done."

But before leaving the mother bear and her dead cub, the park worker took out a camera to document the grim scene, with hopes of turning this moment into one that would educate visitors to the park and teach them that this moment could have been prevented.

"Every year we report the number of bears that get hit by vehicles, but numbers don’t always paint a picture," the writer shared. "I want people to see what I saw: the sad reality behind each of these numbers."

And the ranger made an urgent call to those who came to the park to take in the majestic world it had to offer. 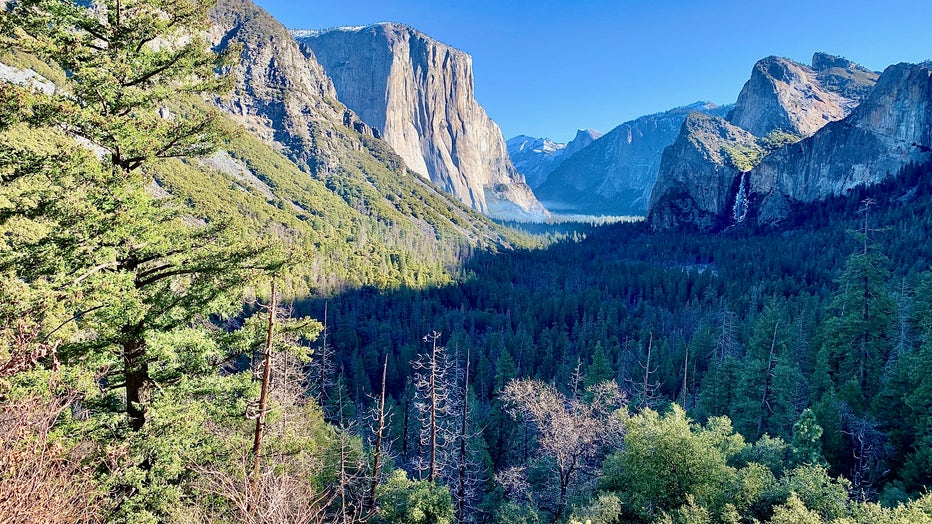 "So please, remember this," the ranger pleaded, "we are all just visitors in the home of countless animals and it is up to us to follow the rules that protect them. Go the speed limit, drive alertly, and look out for wildlife. Protecting Yosemite’s black bears is something we can all do." 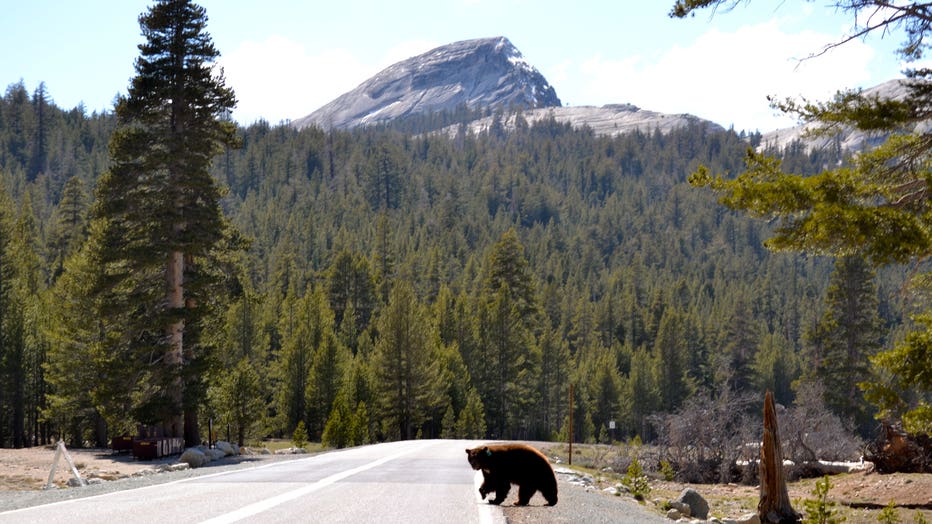 File of bear crossing the road.

Visitors to Yosemite National Park can learn more about how to prevent vehicle-bear collisions by clicking here.