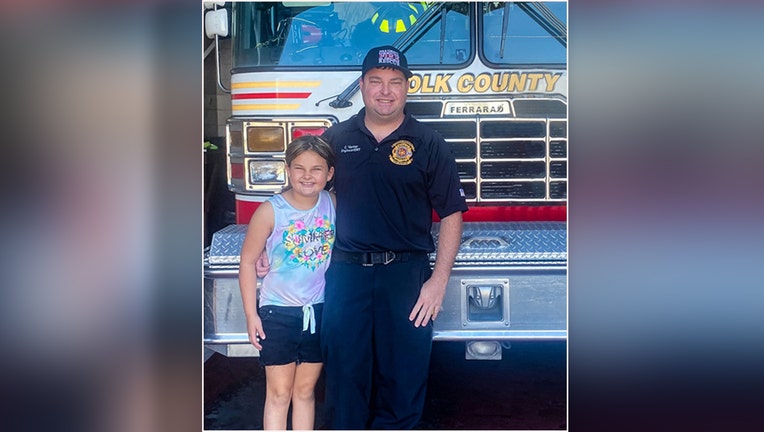 LAKELAND, Fla. - The 8-year-old daughter of a Polk County EMT is following in her father’s footsteps.

When Chris Varner, an engineer/EMT with Polk County Fire Rescue, answered his phone on July 18, he was expecting to have his regular end-of-the-day chat with his daughter Paisley, but things did not go as expected.

Instead of talking about her day, Paisley called her dad because an adult who was at home with her and her sister was having a medical emergency and was unresponsive, according to a social media post from PCFR.

Varner says his daughter remained calm on the phone and told him that she called 911 before reaching out to him, so EMS would arrive.

After making sure Paisley gave dispatch the correct information, Varner stayed on the phone with his daughter, who asked him what she should do to help the adult and even said she was ready to perform CPR if needed.

First responders arrived minutes later and treated the patient, who was able to make a full recovery thanks to Paisley’s actions and quick thinking.

According to the Facebook post, Varner has been working with PCFR since 2015. Since he joined the team, Paisley has been able to watch her dad take part in a variety of training classes.

"The fact that Paisley contacted 911 by herself and then quickly turned her attention to what she needed to do to save a life is a great feeling as a father," Varner shared.

PCFR commended Paisley for her actions in the Facebook post. The post stated, "The care Paisley displayed for someone that was in need and her concern for helping someone else experiencing a medical emergency is an amazing thing. Awesome work Paisley!"