NASHVILLE, Tenn. - A zebra escaped a local livestock auction in Cookeville Tennessee on Thursday and was eventually captured. Police attempted to taser the animal in hopes of capturing it but a local elementary school put out a warning to children’s parents saying that it only seemed to make the animal angry.

"Good morning Prescott Families—There is a zebra on the loose in the Prescott area. It escaped a truck, was tased, and is mad. Do not approach. (Yes, really.)" wrote officials for Prescott South Elementary School.

Ashley Francis captured a photo of the zebra wandering near a road.

"One thing I’d never thought I’d see on my way to work this morning," wrote Francis on Facebook.

Many people commented on the post expressing shock that such an exotic animal would be found wandering a place like rural Tennessee, just 80 miles east of Nashville.

"Someone totally drove past and was thinking "I really need coffee this morning if I'm seeing zebras," one person commented. 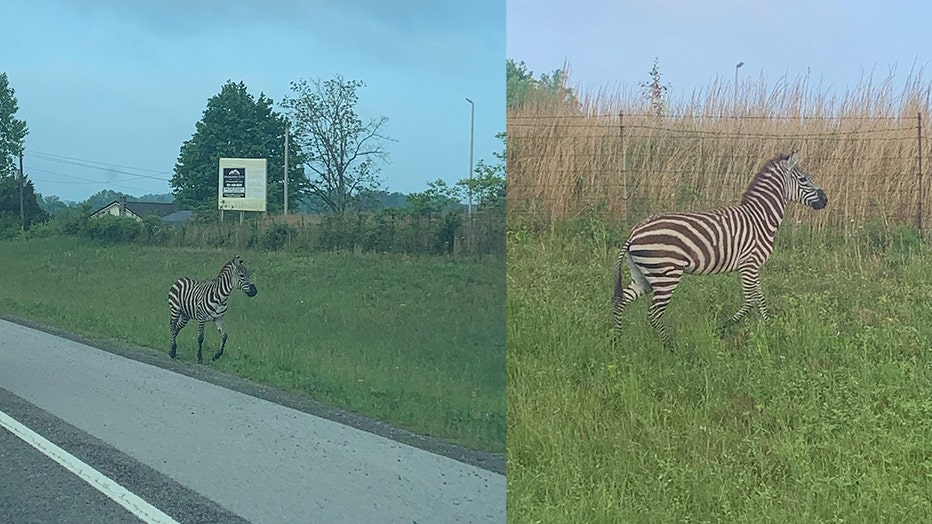 Ashley Francis photographed a zebra that escaped a nearby auction in her town.

Cookeville Police Department said in a post on Facebook that at one point, the Zebra ran onto the highway but luckily traffic was sparse.

Police say the zebra was eventually cornered and directed onto a transport trailer at approximately 7:15 a.m. local time.

"At some point, two officers of the Cookeville Police Department apparently made unsuccessful attempts to deploy issued TASER devices to redirect or capture the animal. Regardless, the zebra was cornered and directed onto a transport trailer around 7:15 AM this date," police wrote on Facebook.

According to local media reports, the zebra escaped the Triple W Alternative Livestock Auction but auction officials said the zebra did not escape from their custody but instead someone parked at their facility.