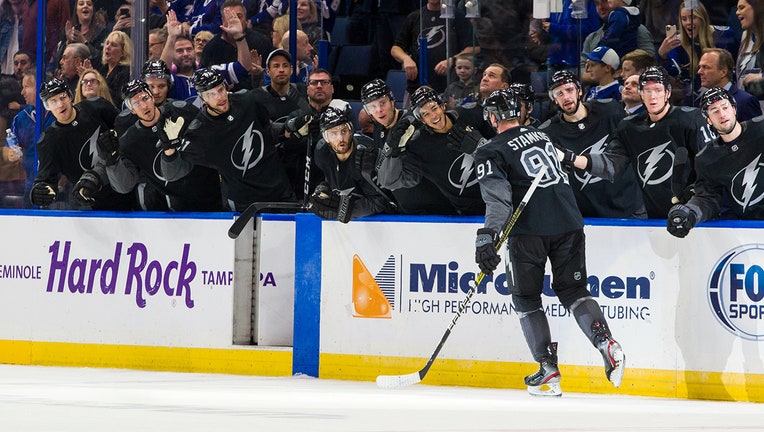 Steven Stamkos of the Tampa Bay Lightning celebrates his 400th career goal during the third period with teammates against the Winnipeg Jets at Amalie Arena on November 16, 2019 in Tampa, Florida. (Photo by Scott Audette/NHLI via Getty Images)

TAMPA, Fla. - Steven Stamkos celebrated another milestone in a stellar career with grace and humility.

"I'm sure this will be one of those moments you reflect on after the fact, but in saying that it's still pretty surreal," the six-time All-Star, who's played his entire career with Tampa Bay, said after accomplishing the feat during a loss at home to the Winnipeg Jets.

"You never envision scoring that many goals in the NHL, and hopefully a lot more to come," Stamkos added. "But it's a great honor and privilege to play in this league for a long time, and to do it with one organization is pretty special."

At 29, Stamkos is in his 12th season and no longer the most dynamic scorer on a deep, talented roster featuring reigning league MVP and scoring champion Nikita Kucherov and rising star Brayden Point. He remains the face of the franchise, though, and entered Tuesday night's game against defending Stanley Cup champion St. Louis Blues with a team-leading seven goals, along with 13 assists for 20 points.

He scored No. 400 on a one-timer late in a 4-3 loss to the Jets, reaching the milestone in his 763 career games. Among active players with at least 400, only Ovechkin did it in fewer games.

"Minor hockey to juniors, I don't think I've scored 400 goals in my life and he's done it at the highest level you can play at. What an amazing accomplishment. ...Probably him and Ovechkin are the best goal scorers in the league," Lightning forward Pat Maroon said.

Maroon, in his first season with Tampa Bay, signed with the Lightning as a free agent after helping the Blues win their first NHL title.

"Every single night he proves he's a natural goal scorer, and that's why teams lock on him all the time. He's dangerous at all parts of the ice, especially in the O-zone," Maroon said. "I'm really happy for him. ... Now he gets to chase 500."

A more immediate goal is to help the Lightning get back to the playoffs, where Tampa Bay was swept in the first round after matching the league record for regular season victories with 62.

The team is off to a slower than anticipated start -- 9-7-2 after Tuesday night's 3-1 loss at St. Louis -- however coach Jon Cooper and his players say there's no cause for alarm.

Thursday night's game at Chicago concludes a season-opening stretch in which the Lightning play 12 of 19 games on the road, including an extended trip to Sweden for the NHL Global series, where they won two games against Buffalo and felt they began to come together as a team.

This weekend starts a five-week stretch in which they will play 14 of 18 at home.

"We've got to build on what happened in Sweden. It will be nice come end of November (and) December to get a little rhythm at home, and hopefully we can get a little traction," Cooper said.

"Obviously, being away for two weeks is tough, but I'd say we made the most of it as a group," Stamkos said. "We got two big wins. It doesn't stay over there, though. It's about coming together now. We've had a really difficult season. We see the record that we have with two straight weeks on the road and the majority of our games being played (on the road). I think we're pretty happy with the results. ... I think we took a step forward (in Sweden).

One potential benefit to playing so many early road games is the schedule has allowed for additional practice time, where the Lightning have focused on several areas that were problematic during the team's first-round postseason loss to Columbus last spring

The Lightning were the NHL's highest scoring team last season. The offense remains elite, and there's also a concerted effort to get better defensively

"From the games in Sweden to (now), we've just to keep building, keep on playing the right way," center Anthony Cirelli said, "and good things will happen."
------
AP Hockey Writer Stephen Whyno in Washington contributed to this report.