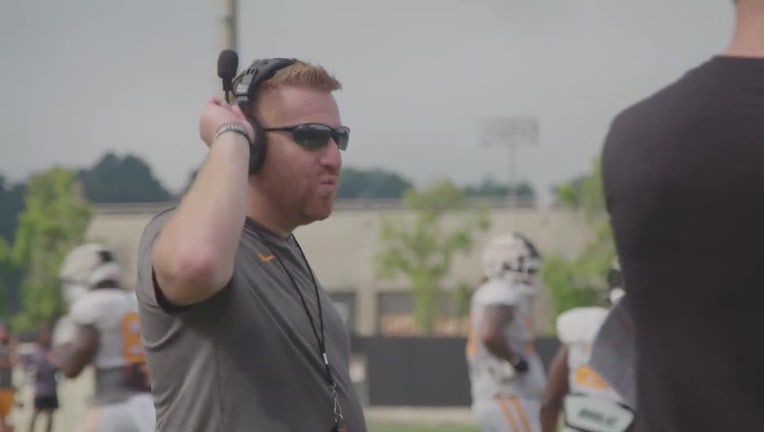 Alex Golesh has been named the sixth head coach of the USF Bulls.

TAMPA, Fla. - On Sunday, the University of South Florida announced Alex Golesh, a 2022 Broyles Award finalist, as the sixth head coach in the school’s football history.

Golesh‘s college coaching career started at Ohio State as a coaching assistant in 2004. He worked for eight different college programs, including Central Florida, where he was the co-offensive coordinator and tight end’s coach. He spent the last two seasons as the offensive coordinator at the University of Tennessee. This season, the Vol’s scored a school record of 568 points and was the nation’s top offense.

He helped propel the Vols from three wins (3-7) the season before his arrival to 10 wins this year and a No. 7 College Football Playoff ranking. Golesh implemented a tempo-based offense at UT that led to dramatic improvement, shattered Vols' records and has seen UT rank No. 1 in the nation in scoring (47.33), yards per game (538.1), points per possession (3.24) and yards per play (7.35) in 2022. Tennessee is the only team to average over 300 yards passing and 200 yards rushing on the 2022 season, and has scored 40-plus points in 15 games since his arrival.

Golesh will be formally introduced to Bulls Nation and media Monday at 11:30 a.m. at the USF Alumni Center on the Tampa campus. The event will be open to the public.

Plans have started to shape up for a new football stadium at the University of South Florida, and leaders took a major step towards making it a reality Tuesday.

In his 20th season in collegiate coaching, Golesh has worked his way up through the collegiate ranks while serving on the staffs of eight FBS programs and has been a key recruiter at several of those stops, helping to lead program turnarounds at Tennessee, Iowa State, Illinois and Toledo.

"We are thrilled to welcome Coach Golesh as the new leader of our program," stated University of South Florida Vice President of Athletics Michael Kelly. "He is a dynamic coach and recruiter who is relentless in pursuit of excellence, as evidenced by his outstanding track record of elevating numerous programs. He also happens to be one of the most creative and successful offensive minds in college football," Kelly said. "Alex has worked his way up through the college ranks, been a key part of successful program-building at numerous stops and has developed perhaps the most fearsome offensive attack in college football today. We are very excited that he and his wife, Alexis, and their children, Corbin and Barrett, are joining our Bulls family and he will lead us into an exciting future of USF football."

At 6’9" is one of the most daunting members of the USF football team, but he has never played the game.

"I am thankful to Chairman Weatherford, President Law and Michael Kelly for their support and belief in me to bring the USF program back to the top of college football," Golesh said. "I'm excited to be back in the state of Florida and work with the great high school coaches in this state.  This program will have an identity both offensively and defensively, and with special teams. We will be the most aggressive team in the country, both on the field and on the recruiting trail. I am humbled by the opportunity, and I appreciate the commitment from this University and Bulls Nation to hiring the best staff in the country. My family and I can't wait to get going."

Golesh's teams have made 12 bowl game appearances and he has coached five players that have been selected in the NFL Draft. He was named to the prestigious American Football Coaches Association (AFCA) 35 Under 35 class of 2019. The program is aimed at identifying and developing premier, future leaders in the football coaching profession.

Golesh is from Moscow and moved to the United States when he was young.