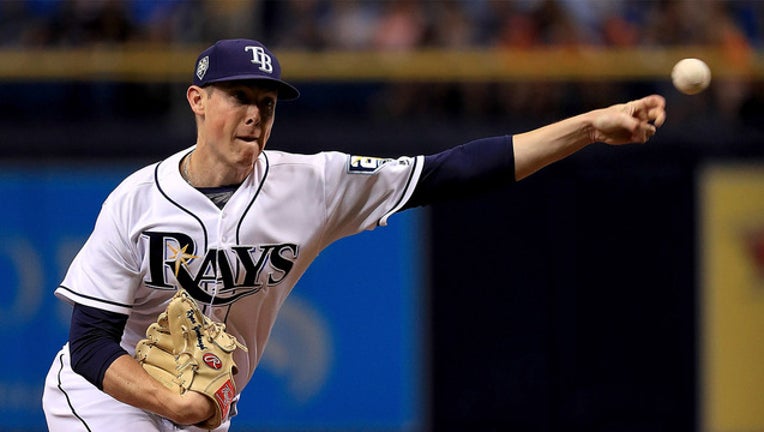 ST. PETERSBURG, Fla. (AP) - With another dominant pitching performance, the Houston Astros didn't need much offense - or luck - to tie a franchise record for road wins.

McCullers (9-3) gave up three hits while striking out seven. The Astros have won his last six starts and have won 18 of 21 overall. Their latest win matched the club record set last May 14-June 5 on the way to winning the franchise's first World Series title.

The Rays threatened in the eighth after Chris Devenski replaced McCullers to start the inning. Willy Adames and Kevin Kiermaier opened with singles to put runners at the corners. Matt Duffy failed to get a squeeze bunt down and then, with Kiermaier running, hit a rocket right at shortstop Marwin Gonzalez, who turned it into an easy double play.

"You are going to line out sometimes, it's part of the game," Duffy said. "Not executing (the bunt) is definitely what I'm most frustrated with."

Jake Bauers then grounded out to end the inning with Devenski getting his 12th straight scoreless appearance.

"We were very fortunate to just get in that situation, and then Devo makes some pitches and gets out of the tnning," Houston manager A.J. Hinch said.

Marisnick's homer in the fifth came off Ryan Yarbrough (7-4) and was his seventh of the season. It ended the Rays' streak of 26 scoreless innings, the second-longest in franchise history.

It was the second homer and second multi-hit game in the last three days for Marisnick, who batted ninth for Houston.

"I'm just kind of relaxing and settling in, having a better idea of what I'm trying to do with each individual pitcher," he said.

The Rays, who beat Washington 1-0 on Tuesday, became the first American League team team to play consecutive 1-0 games in the same season since the Los Angeles Angels did it on June 28-29, 2008.

Rays reliever Jose Alvarado had a mini Gold Glove Award in his locker, a gift from a stadium security guard after the left-hander played one batter at first base in-between stints on the mound during the ninth inning of Tuesday's 1-0 win over Washington. "It was a little bit crazy," Alvarado said through a translator. "I'm just happy the team won."

Astros: SS Carlos Correa missed a third straight game with a stiff back and will be placed on the 10-day disabled list Friday. ... INF Yuli Gurriel is on the paternity list but might return this weekend.

Rays: RHP Chris Archer (left abdominal strain) had a three inning simulated game and should start a minor league rehab assignment next week. The opening-day starter could rejoin the rotation around the All-Star break.

RHP Gerrit Cole (9-1) will go for his eighth straight win for the Astros on Friday night against RHP Wilmer Font (1-1). Font pitched 5 2/3 scoreless innings against the New York Yankees on Saturday, the longest outing of his career, and earned his first major league win.