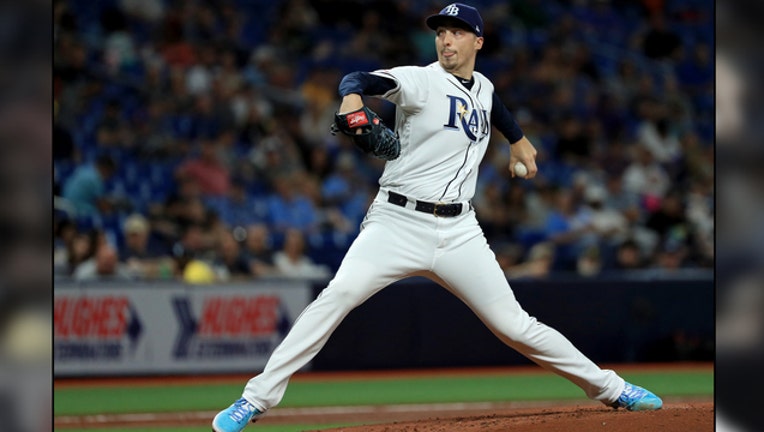 ST PETERSBURG, FLORIDA - MAY 06: Blake Snell #4 of the Tampa Bay Rays pitches during a game against the Arizona Diamondbacks at Tropicana Field on May 06, 2019 in St Petersburg, Florida. (Photo by Mike Ehrmann/Getty Images)

Snell (3-3) rebounded from allowing a career-high seven runs over three innings of an 8-2 loss at Kansas City last week to hold the Diamondbacks without a hit until Ildemaro Vargas singled through the hole between shortstop and third base with two outs in the sixth.

The 26-year-old left-hander, who has struggled this year after leading the AL with 21 wins and a 1.89 ERA last season, hit the next batter with a pitch before getting Tim Locastro on a groundout that ended his 83-pitch outing. Snell struck out nine.

Chaz Roe relieved to start the seventh and Casey Sadler allowed an unearned run in the ninth to finish a two-hitter before 8,124, the lowest at Tropicana Field since September 2017.

Pham's grand slam off Merrill Kelly (3-3) finished a five-run second inning that put the AL East leaders up 6-0. Daniel Robertson and Avisail Garcia drove in three runs apiece for the Rays, who have the best record in the majors.

Kelly, a 30-year-old rookie who began his pro career in the Rays organization, allowed seven runs and seven hits in four innings.

Before Vargas broke up the perfect game on a 1-0 pitch, the closest the Diamondbacks came to getting a hit was John Ryan Murphy's third-inning line drive that Robertson, the Tampa Bay shortstop, snared with a leaping catch.

Arizona's Christian Walker worked the count to 3-2 with one out in the fifth before taking a third called strike.

Garcia had a two-run homer off Murphy, the Arizona catcher who pitched the eighth inning for the Diamondbacks.

Rays: RF Austin Meadows (sprained right thumb) went through a full workout and hopes to start a minor league rehab assignment this week. ... Manager Kevin Cash said Matt Duffy's rehab assignment with Class A Charlotte for back and left hamstring injuries has been stopped because the third baseman "doesn't quite feel 100 percent." Cash is hopeful that a date for when Duffy will resume the assignment can be made in the near future.

FIRST WIN IN A MONTH

Snell made his third start since returning from a stint on the injured list with a broken toe on his right foot. He won for the first time since beating the White Sox in Chicago on April 8. The Rays improved to 3-4 in games started by the 2018 Cy Young winner, compared to 19-8 in games started by all other pitchers.

Rookie Taylor Clarke makes his first major league start for the Diamondbacks on Tuesday night. He earned a save in his only other big league appearance, pitching three scoreless innings against the Cubs on April 20. The Rays will send an opener to the mound first, however manager Kevin Cash didn't plan to announce who will start until after Monday's game.