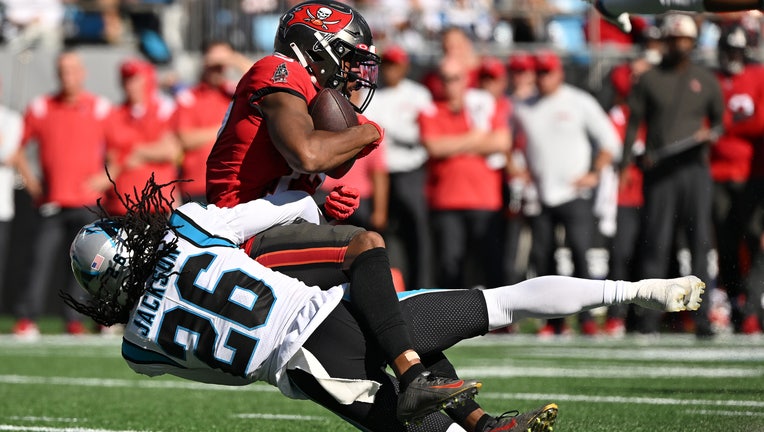 CHARLOTTE, NORTH CAROLINA - OCTOBER 23: Donte Jackson #26 of the Carolina Panthers tackles Russell Gage #17 of the Tampa Bay Buccaneers in the fourth quarter at Bank of America Stadium on October 23, 2022 in Charlotte, North Carolina. (Photo by Grant

CHARLOTTE, N.C. - Tom Brady and the Tampa Bay Buccaneers fell below .500 with a stunning 21-3 loss to the Carolina Panthers, who won just their second game of the season Sunday despite playing with a third-string quarterback and interim head coach.

Brady was 32-of-49 passing for 290 yards for the Bucs (3-4). One of those incompletions came when Mike Evans dropped a wide-open 64-yard touchdown pass on the third play of the game.

Brady hasn't had a losing record this far into a season since the 2002 New England Patriots dropped four straight games to reach 3-4. Brady has never been under .500 after eight games.

P.J. Walker threw for 177 yards and two touchdowns for Carolina (2-5) in place of injured Baker Mayfield and Sam Darnold. The Panthers won for the first time under interim coach Steve Wilks, who replaced Matt Rhule when he was fired Oct. 10.

D’Onta Foreman ran for 118 yards, Chuba Hubbard added 63 yards and a touchdown and the Panthers handed the Buccaneers their third loss in four games.

Carolina came in as a 13 1/2-point underdog and having lost 12 of 13 games. It's now one game behind the Bucs and Atlanta Falcons for first place in the NFC South.

The Panthers led 7-0 at halftime behind a 20-yard TD pass from Walker to D.J. Moore. The Buccaneers couldn't get anything going in the first half after Evans juggled and then dropped the long pass from Brady when he was more than 10 yards behind the defender.

The Bucs never recovered on offense and were limited to 46 yards rushing.

Carolina pushed the lead 14-0 after Foreman's 60-yard run set up a 17-yard touchdown burst by Hubbard. Walker put the game away with a 29-yard TD pass to tight end Tommy Tremble in the right corner of the end zone with 9:33 left in the game.

Buccaneers: CBs Antoine Winfield (concussion) and Anthony Chesley (hamstring) left the game in the second half.

Panthers: CB C.J. Henderson left in the second half with a shoulder injury.