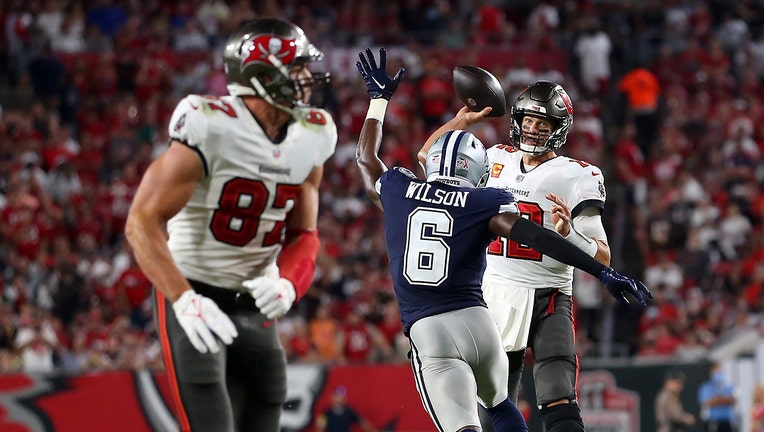 TAMPA, Fla. - Two touchdown connections in the Super Bowl, then two more in a season-opening victory.

The long-running Tom Brady and Rob Gronkowski show rolls on with no real signs of slowing down.

The prolific duo — now in their second seasons with the Tampa Bay Buccaneers after nine highly successful years in New England — moved ahead of Steve Young and Jerry Rice into third place on the NFL’s career list for regular-season TDs by a passing combo during last week’s 31-29 victory over the Dallas Cowboys.

Brady threw for 379 yards and four TDs, including a pair to Gronkowski, who has been on the receiving end of a TD pass from the 44-year-old quarterback 86 times during the tight end’s stellar career with the Patriots and Bucs.

Hall of Famers Peyton Manning and Marvin Harrison (112) and Philip Rivers and Antonio Gates (89) have combined to reach the end zone more often during the regular season. Including playoffs, Brady and Gronkowski have done it 100 times.

"It’s cool. I didn’t really realize it at the moment," Gronkowski said, reflecting on the milestone.

Instead, the 11th-year pro who came out of retirement in 2020 to join Brady in Tampa Bay is focused on doing whatever he can to help the Bucs to become the first team to repeat as Super Bowl champs since Brady led the 2003 and 2004 Patriots to consecutive titles.

The Bucs (1-0) host NFC South rival Atlanta (0-1) on Sunday. The Falcons failed to score a touchdown in a 32-6 season-opening loss to the Philadelphia Eagles.

"I think a lot of people get caught up with Gronk the personality and don’t see the worker," Bucs coach Bruce Arians said, adding it’s easy to see why the 6-foot-6, 265-pound tight end has such a good relationship with Brady, a seven-time Super Bowl winner.

"He works his tail off," Arians said. "I mean, he’s here early, he leaves late. He doesn’t leave anything unturned in his preparation. He’s meticulous, just like Tom, and I think that’s why he’s one of Tom’s favorite players."

Despite having to shed a year of rust and learn a new offensive system, Gronkowski finished the 2020 regular season with 45 receptions for 623 yards and seven touchdowns. He had eight catches for 90 yards and two TDs last week, including two for 26 yards on the game-winning field-goal drive Brady led in the final minute.

"It’s unbelievable the chemistry they have," Arians said

"The only way you can stay on top of your game is trying to find ways to take it to another level," Gronkowski noted. "That’s how you keep going in this league."

The Bucs take a nine-game winning streak into Sunday. Including their Super Bowl run, they’ve scored at least 30 points in eight straight. The streak includes a pair of victories over the Falcons, who led 17-0 at halftime before Brady rallied the Bucs to a 31-27 victory on the road in December.

The streak of eight consecutive victories while scoring 30-plus points matches the longest such stretch in NFL history. The only other teams to do it were the 2007 and 2010 Patriots, both led by Brady.

"Not many people have slowed him down. But it’s a football game. It’s a challenge every week," Smith said.

"There’s a graveyard of guys who’ve popped off with arrogance about Tom Brady. Nobody’s done it better than him," the coach added. "We’ve got all the respect in the world. There’s a reason he’s won seven Super Bowls."

After setting career highs with 72 receptions for 786 yards and four touchdowns last season, there was an expectation that Falcons wide receiver Russell Gage might be in line for even bigger numbers this season. With the trade of Julio Jones to Tennessee, Gage was regarded as the No. 2 receiver behind Calvin Ridley.

Gage is still waiting for his first catch after being shut out on two targets against the Eagles. He insists he’s not worried about his role.

"Same old approach for me," Gage said. "I’m out here every day to get better. Every now and then you’re going to have games like that. As long as I’m doing everything I’m supposed to do and what’s asked of me from coach, I know the ball is going to find me eventually. That’s not nothing that I’m worried about."

Matt Ryan had a quick response when a reporter mentioned the Falcons blowing a 28-3 lead to Tom Brady’s New England Patriots in Super Bowl 51 following the 2016 season. The Patriots won 34-28.

"I’ve never heard it," Ryan said with a laugh when asked about it. The follow-up suggestion that beating Brady and the Buccaneers could help make up for that Super Bowl loss drew another laugh.

"Listen, of course we want to win this game, but it’s not going to make up for that," Ryan said. "It’s one of the things that is part of your past, but it’s got no bearing on this week."