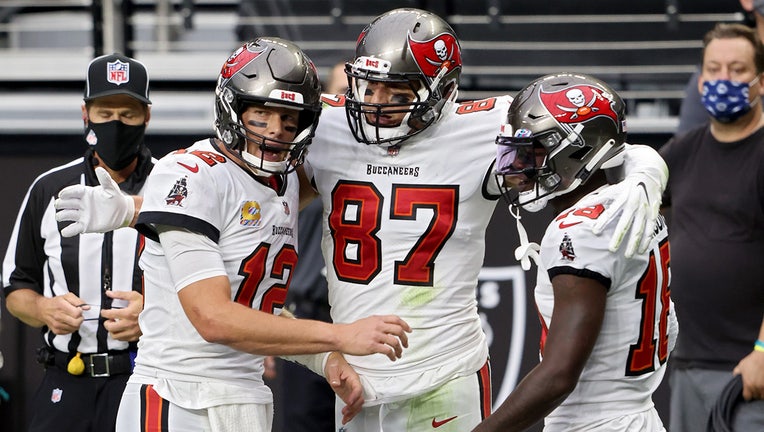 Tom Brady, Rob Gronkowski, and Tyler Johnson celebrate after scoring a touchdown in the second quarter against the Las Vegas Raiders at Allegiant Stadium on October 25, 2020 in Las Vegas, Nevada. (Photo by Jamie Squire/Getty Images)

LAS VEGAS - Tom Brady threw four touchdown passes to move past Drew Brees for the most in NFL history and ran for another to lead the Tampa Bay Buccaneers to a 45-20 win over the Las Vegas Raiders.

Brady connected with Rob Gronkowski in the second quarter and on a perfectly placed 33-yarder to Scotty Miller later in the first half. He then added two more in the fourth quarter, including the 559th of his career to move past Brees for the most ever

The 4-yard pass to Godwin was part of a key stretch when it appeared the Raiders were in position for a comeback after cutting the deficit to 24-17 on Derek Carr’s second TD pass of the game.

The Raiders then got a stop and were driving for the potential tying score before coming up 1 yard short of a first down on a third-and-4 pass to Darren Waller. Coach Jon Gruden opted for a field goal to make it 24-20.

Brady then engineered another TD drive to make it an 11-point game and the Bucs put it away when Carr threw an interception on Las Vegas’ next play to set up Ronald Jones’ 1-yard run.

Carr went 24 for 36 for 284 yards, two TDs and one interception as the Raiders were unable to build on a big win at Kansas City before the bye.

On successive plays on a drive in the third quarter, the Bucs had an interception by Mike Edwards and a sack by Ndamukong Suh wiped out on penalties by Shaq Barrett and Sean Murphy Bunting. Carr then connected on a 44-yard pass to Nelson Agholor to set up a

Raiders offensive lineman Gabe Jackson was ejected after the TD for apparently throwing a punch during a scrum after the play. Jackson was one of four Raiders offensive linemen who missed most of practice this week for having “high risk” contact with teammate Trent Brown after he tested positive for the coronavirus. The four were cleared to return just hours before kickoff.

Carr looked for his favorite target on the opening drive, connecting on a 28-yard pass to Agholor and

Brady connected with Gronkowski for the second straight week with a 5-yard TD pass in the second quarter. That’s the 92nd time those two teamed up on a TD pass in the regular season or playoffs, tying the duo of Steve Young and Jerry Rice for the second most ever. Only Peyton Manning and Marvin Harrison have more with 114.

Buccaneers: CB Carlton Davis left in the second half with a chest injury, but returned to the game.

Raiders: T Sam Young left with a knee injury in the second quarter and didn't return.