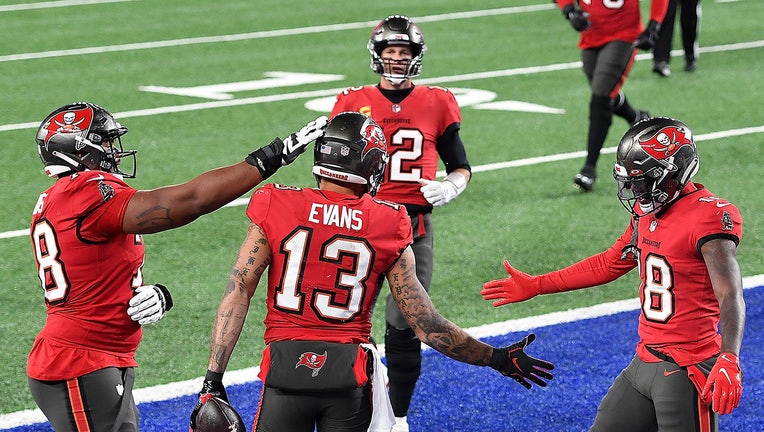 Mike Evans reacts after pulling in a touchdown reception against the New York Giants in the second half with Tristan Wirfs and Tyler Johnson. (Photo by Sarah Stier/Getty Images)

EAST RUTHERFORD, N.J. - Tom Brady has felt uncomfortable against the New York Giants before. Most notably in a couple of Super Bowl losses.

He recognized Monday night's 25-23 victory by his Tampa Bay Buccaneers wasn't very artistic. At least, for the star quarterback, it had a better ending.

"We obviously didn't play the way we're capable of, but it was good to get a win," Brady said.

Lackluster for much of the game, Brady did what he does best in the second half. He threw touchdowns passes to Rob Gronkowski and Mike Evans, giving him the career lead in TD throws once more.

The Saints' Drew Brees had passed Brady on Sunday, but now the six-time Super Bowl champ is back on top with 561.  Evans' diving 8-yard catch  provided the go-ahead points.

But Tampa Bay (6-2) had to sweat it out. Daniel Jones drove New York (1-7) 70 yards in 13 plays and connected with  Golden Tate for a 19-yard touchdown with 28 seconds remaining. The 2-point conversion failed as the officials picked up a flag presumably for defensive pass interference.

"You never apologize for winning," Bucs coach Bruce Arians said. "We made the plays that counted."

Brady and Gronkowski  earlier combined for a 3-yard scoring pass on which Gronk barely held onto the ball long enough. That made the old New England combination second in TDs for a duo with 93, 21 behind Peyton Manning and Marvin Harrison of the Colts.

Unable to connect with Evans on a 2-point conversion, Brady still had the Bucs on top 15-14.

After New York went back ahead on Graham Gano's 33-yard field goal, Daniel Jones was pressured into an unwise throw to Tate that  Sean Murphy-Bunting picked off at the Tampa 33. That set the stage for the 66-yard drive to the touchdown by Evans.

"The interceptions were huge for us," Brady said.

"The young quarterback, he's still trying to do too much," Arians added.

First-year Giants coach Joe Judge, who won three Super Bowls in New England with Brady, is not discouraged by the team's record halfway through its schedule.

"I see a lot of improvement, our guys improving day by day," first-year coach Joe Judge said. "We have a good foundation. I see the core of a team that is developing."

New York got an early break -- and soon after a touchdown -- when Brady's pass was tipped by Dalvin Tomlinson and caught by Bucs running back Ronald Jones.

But he fumbled when hit by Blake Martinez and rookie Darnay Holmes recovered at the Tampa Bay 12.

Dion Lewis' made a sliding catch in the corner of the end zone on third down for a 7-3 lead.

Ronald Jones was a nonfactor the rest of the half as Leonard Fournette got most of the action.

The Giants' next scoring drive was a model of efficiency, featuring two gains of 11 yards, a 12-yarder, a 14-yarder and a 17-yard run by Wayne Gallman. He scored from the 2 to finish the 10-play series that covered 77 yards for a 14-3 lead.

Brady, as has been his custom for two decades, then guided his team to a score, but it was merely Ryan Succop's second of four field goals, a 40-yarder with 7 seconds left in the half. Succop also had a 37-yard field goal on the game's opening drive, a 43-yarder set up by  Carlton Davis' interception in early in the third quarter, and a 38-yarder with 3:41 to go for what turned out to be the decisive points.

Soon after Succop had made it 14-9, Gronkowski was in the end zone -- only to see Daniel Jones connect with his tight end, Evan Engram, for a 30-yard play. That set up Gano's 33-yard kick and the 17-15 New York lead heading into the fourth period.

Brady finished 28 for 40 for 279 yards, while Jones was 25 for 41 for 256 yards. ... Evans led Tampa Bay with five catches for 55 yards, and Gronkowski wound up with four receptions for 41 yards. ... Former Giants DE Jason Pierre-Paul had one sack among his five tackles ... Giants WR Sterling Shepard had eight receptions for 74 yards.

The Giants donned uniforms similar to what the 1990 Super Bowl title team wore, white jerseys, and pants with blue and red stripes, a GIANTS helmet decal instead of the familiar "ny," and white facemasks replacing the customary gray.

Giants: at Washington next Sunday.