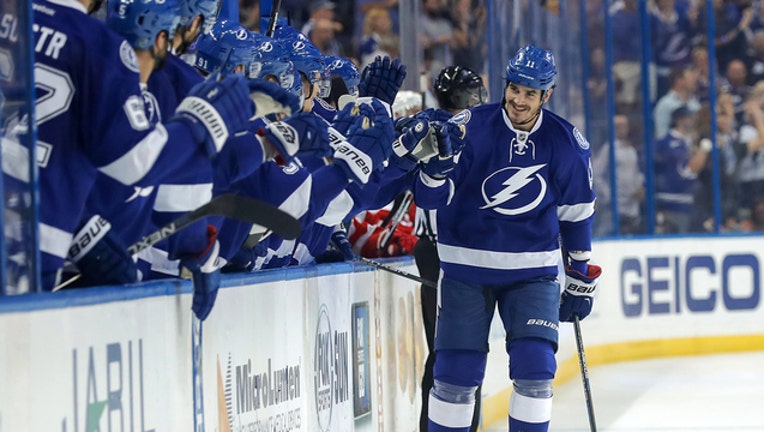 TAMPA, FL - OCTOBER 13: Brian Boyle #11 of the Tampa Bay Lightning celebrates a goal against Detroit Red Wings during a game at the Amalie Arena on October 13, 2016 in Tampa, Florida. (Photo by Mike Carlson/Getty Images)

The 32-year-old forward was diagnosed with CML after blood work at the start of training camp showed irregularities from last season. Boyle said based on what team doctor Michael Farber and others have told him, he expects to live his life under normal conditions.

That includes getting on the ice with his new team after signing a $5.5 million, two-year contract in the offseason. Boyle said on a conference call Tuesday that he feels as close to normal as possible, and Farber expects treatment to begin as soon as some further tests come back.

"We have a good plan of attack here, and I'm looking forward to getting on the ice and playing," Boyle said. "When that happens I don't know, but my mindset is Oct. 7."

The Devils open the regular season at home Oct. 7 against the Colorado Avalanche. That might be an aggressive target date, but Boyle said he expects only minor side effects even while he is being treated.

The Devils are optimistic Boyle will handle the medications well, no matter the course of action.

"He will be monitored very closely," Farber said. "He came to us in great shape with relatively few symptoms, so I think he'll respond quite well to therapy."

CML is the same disease that former NHL forward Jason Blake played through after being diagnosed in 2007.

Boyle, who played last season with the Tampa Bay Lightning and Toronto Maple Leafs and whose wife, Lauren, had a baby girl in May, said he felt mostly fatigued but chalked it up to life events. Moving forward, he lamented his wife not letting him eat Skittles anymore but is glad that there shouldn't be any short- or long-term problems.

"In a serious way, I've been told the treatment, it's supposed to work," Boyle said. "Relative to the big ugly 'L' word leukemia, it's good news."

Boyle is a veteran of 624 NHL games with the Los Angeles Kings, New York Rangers, Lightning and Maple Leafs and has 93 goals and 76 assists. The Devils signed him for his veteran leadership and faceoff and penalty-killing abilities.

"It was a two-year contract, Brian, so let's get the performance part down first," Shero said. "He's been incredibly strong and certainly a man of faith and his family and certainly as we say the glass is half full here moving forward."

Focused on his performance and eager to move past his diagnosis as a news story, Boyle wants the season to go on as normal and for no one to blame the disease for his play one way or the other.

"We don't have to be asking about it all the time," Boyle said. "If I suck one night, it's because I sucked, not because of any other reason. And hopefully if that's the biggest issue, then that's a good thing."