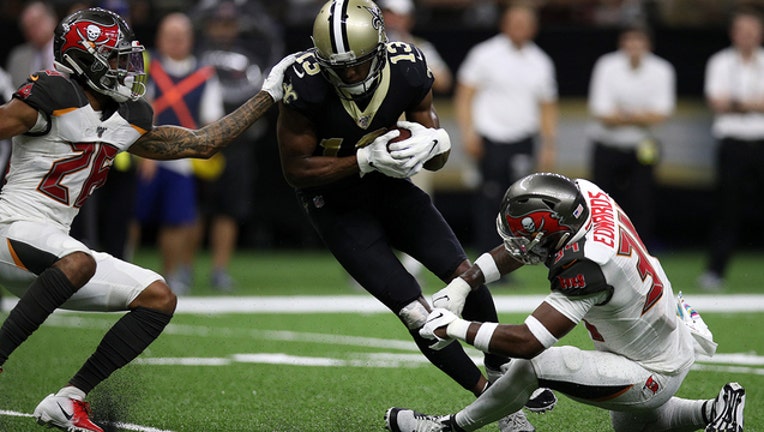 NEW ORLEANS - Teddy Bridgewater passed for 314 yards and four touchdowns and the New Orleans beat Tampa Bay 31-24 on Sunday to keep Bridgewater unbeaten in three starts for the Saints this season.

With Bridgewater getting increasingly accustomed to playing for the injured Drew Brees, he had his best game yet for New Orleans (4-1) against a Tampa Bay defense that entered the game ranked second to last in the NFL against the pass.

With inspiring chants of "Ted-dy! Ted-dy!" from the Superdome crowd, Bridgewater completed 26 of 34 passes, with his two touchdown throws to Michael Thomas and one each to Jared Cook and Ted Ginn Jr.

Tampa Bay's secondary struggled to stay with Thomas, who finished with 11 catches for 182 yards.

Bridgewater, who began playing in Week 2 after Brees' first-quarter thumb injury in a loss to the Rams, had not completed a pass as long as 30 yards in his first 11 quarters of play this season.

That changed in the first quarter against the Bucs (2-3) with a 34-yard completion to Thomas. Bridgewater later hit Thomas for a 42-yarder early in the second half, setting up his 33-yard scoring strike to Ginn.

Bucs QB Jameis Winston saw his production drop dramatically from his triumphant 385-yard, four-TD performance against the Rams in Week 4. He was 15 of 27 for 204 yards and two touchdowns to Chris Godwin. But Winston could not connect with receiver Mike Evans, who was Winston's intended target just three times and did not have a catch.

Still, Winston was opportunistic enough to keep his team in the game most of the way.

After rookie defensive back Sean Murphy-Bunting made his first career interception on a pass bobbled by Alvin Kamara in the first quarter, Winston effectively skirted pressure by climbing the pocket and hitting Godwin for a 26-yard TD and a 7-3 lead.

The Saints, who'd beaten Dallas 12-10 on four field goals a week earlier, responded by snapping a streak of 13 offensive possessions without a touchdown. Bridgewater drove New Orleans 75 yards on a series dominated by Thomas, who had two first-down catches of 18 yards before his 14-yard TD reception put the Saints back in front.

The Bucs' Peyton Barber powered in from 2 yards to make it 24-17 in the third quarter. But the Saints' defense was able to apply more pressure as the game wore on, sacking Winston four times in the fourth quarter.

The Saints finished with six sacks in all, two by second-year end Marcus Davenport and one each by Malcolm Brown, Cameron Jordan and rookie Carl Granderson.

Buccaneers starting cornerback Carlton Davis was ejected in the second quarter for a heavy, blind-side helmet-to-helmet hit on Cook as the tight end attended to catch a pass in the right flat. Davis was assessed a 15-yard personal foul on the play and shortly after, officials deemed the hit flagrant enough to warrant disqualification. Davis' ejection thinned the ranks of an already struggling secondary.

The Saints parlayed that first down into a 75-yard touchdown drive that ended with a 9-yard pass to Cook.

Saints coach Sean Payton found a variety of ways to move the ball through the air without Brees in the lineup. Bridgewater was just one of three players with a completion of at least 13 yards. During a pivotal scoring drive early in the fourth quarter, running back Alvin Kamara took a handoff from Bridgewater, ran laterally to his right and completed a 13-yard, first-down pass to tight end Josh Hill. Earlier in the game, reserve QB and utility player Taysom Hill completed an 18-yard pass to Thomas.