Bucs fans are ready for the big game home game

TAMPA, Fla. - The Tampa Bay Buccaneers are coming home for the Super Bowl, the first team in NFL history to be able to make that claim.

With their 31-26 win over the Green Bay Packers in the NFC Championship, the Bucs earned a spot in Super Bowl LV, which is being played at Raymond James Stadium in Tampa, the Bucs’ home stadium, on February 7.

Tom Brady and the Tampa Bay Buccaneers outdueled Aaron Rodgers and the Green Bay Packers on Sunday, earning a spot in the Super Bowl and a place in NFL history.

Since the dawn of the Super Bowl era in 1967, no team has played a Super Bowl in its home stadium. And while the stadium won’t be full – capacity will be capped at 22,000 fans due to the COVID pandemic – the NFL has said many of the invited fans will be health care workers from Central Florida, likely making the game feel like as much of a home game as any that the Bucs have played this season.

But just reaching the game in not enough for the team – they want to make history as the first team to win the Super Bowl in their own house.

"So many teams don't get a chance because they don't get the Super Bowl in ther home stadium. It was obviously a goal of ours to start this season," head coach Bruce Arians said after the game. "But getting to the Super Bowl wasn't what our goal is. Our goal is to win it."

Despite the pandemic, Mayor Jane Castor says it's possible to host a safe Super Bowl.

RELATED: Where you can buy Bucs NFC Championship gear

Here’s a look at the other NFL teams that made the playoffs the season their home stadiums hosted the Super Bowl and came up short: 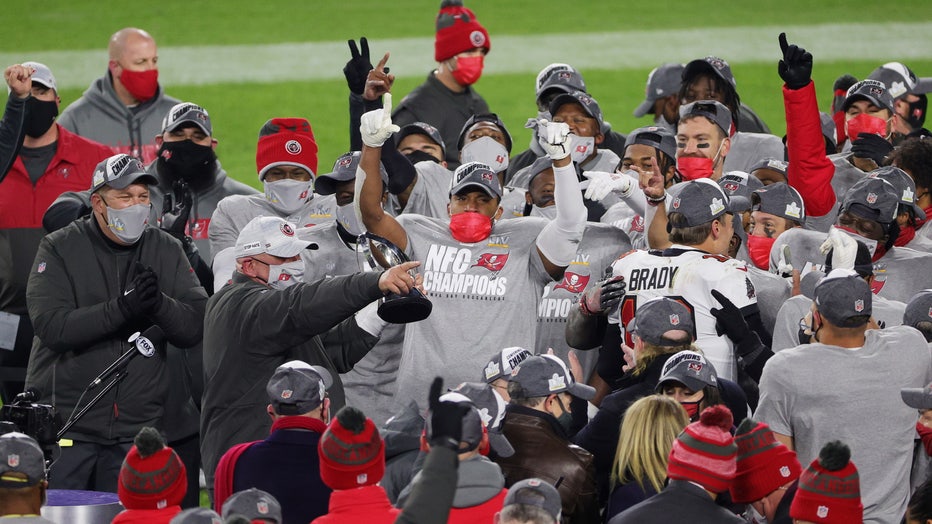 Head coach Bruce Arians of the Tampa Bay Buccaneers celebrates with his team team after their 31 to 26 win over the Green Bay Packers during the NFC Championship game at Lambeau Field on January 24, 2021 in Green Bay, Wisconsin. (Photo by Stacy Rever