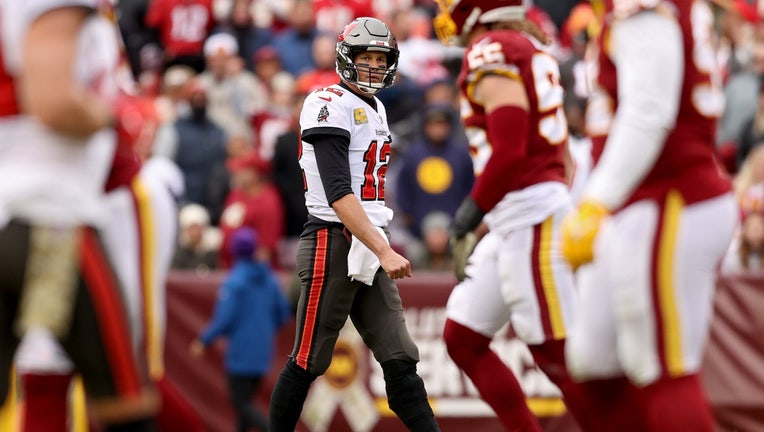 Quarterback Tom Brady #12 of the Tampa Bay Buccaneers reacts against the Washington Football Team during the third quarter at FedExField on November 14, 2021 in Landover, Maryland. (Photo by Patrick Smith/Getty Images)

TAMPA, Fla. - Bruce Arians is at a loss for words to explain what’s going on with the Tampa Bay Buccaneers.

Yes, injuries continue to impede the team’s progress, but the coach of the Super Bowl champions refuses to use the absence of several key players as an alibi for poor play in consecutive losses.

Sunday’s 29-19 loss to Washington (3-6) was especially hard to swallow, Arians said, because the Bucs (6-3) were coming off a bye and had a good week of preparation for an opponent that’s struggled both offensively and defensively this season.

"It’s very alarming to watch the energy we practiced with and show up with the lack of execution and energy on Sunday," Arians said. "We have a lot of soul-searching to do."

An injury-depleted secondary also was a factor in a loss to New Orleans before bye. Still, Arians reiterated there’s no excuse for the defense not getting the job done. Costly penalties continue to haunt the defending champs, who’ve been flagged 15 times for 142 yards in the past two games.

An offense missing Antonio Brown and Rob Gronkowski shoulders some of the blame, too, beginning with QB Tom Brady tossing a pair of interceptions in both losses.

"It’s extremely frustrating," receiver Mike Evans said after the loss to Washington, which lost to Tampa Bay in the wild-card round of last season’s playoffs.

"I know we’re a better team than them and we didn’t get the job done," Evans added. "That’s why you play on Sunday. You gotta go out there and give it your best."

Arians stressed the Bucs have to play smarter and with more "energy and passion" than the past two games.

"Its baffling to me after the week of practice I watched these guys have, that we could play that poorly. ... We are doing one hell of a job on Monday through Friday, but we are not showing up on Sundays," he said.

Despite the offensive struggles lately, Evans remains on track for another big year. He’s the only player in NFL history to begin a career with seven consecutive seasons with at least 1,000 yards receiving — and he’s on course to make it eight with 41 receptions for 606 yards and nine TDs through nine games. He had two catches for 62 yards and scored his 71st career TD, tying the club record set by Mike Alstott.

Brady wasn’t sacked Sunday, though Washington was able to get a hit on the quarterback early to set the tone for a difficult day to throw downfield. Arians said that falls on the offensive line.

"I think we have to protect our quarterback better early in the game and maybe we’ll take some shots down the field like we normally do when he’s protected," Arians said. "But if he’s being hit a bunch early, he isn’t holding onto it for very long. I don’t know one that does."

Linebacker Devin White didn’t have a sack in the first eight games. He had two against Washington in perhaps his best all-around performance of the season.

"If everybody played with the passion and the energy that Devin played with, we wouldn’t have any problems," Arians said. "He should have been the player of the week with the game he just had, and the way he played the game. We’ll use that as an example for everybody else to play with."

Arians said one of the most disheartening aspects of Sunday’s loss was that, on both occasions, the Bucs scored to pull within of one score of taking the lead in the second half, but that the defense responded by yielding long TD drives on Washington’s ensuing possession.

Arians said DT Vita Vea's knee injury suffered in the final minute of Sunday's game doesn’t appear to be as bad as the Bucs initially feared. He described it as a bone bruise and a slight MCL sprain. CB Richard Sherman strained a calf muscle before the game and could be sidelined a few weeks.

The Bucs will try to right themselves at home against the New York Giants on Nov. 22.