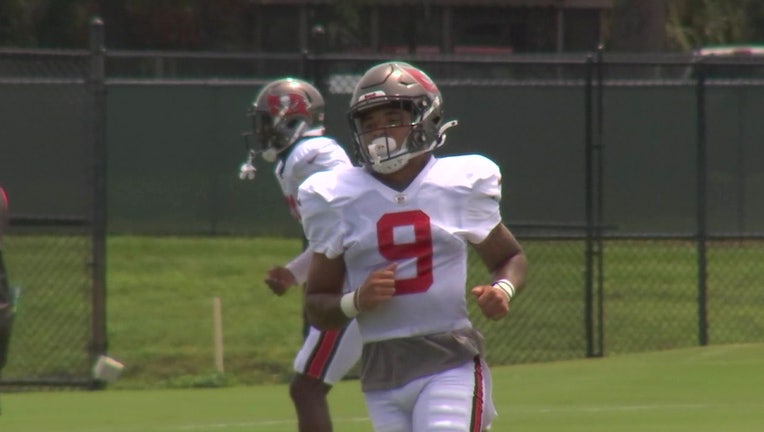 TAMPA, Fla. - Wide receiver Jerreth Sterns knows he's in the most competitive position battles on the Tampa Bay Buccaneers, but he welcome the call from the team.

"It was crazy honestly," said Sterns. "Growing up watching Tom Brady and all the things he would do, and I’m like, ‘Oh gosh, I really go get to be around these guys?’ It was really just a blessing, and I was just excited."

Sterns made the most of his time against the Miami Dolphins, hauling in a touchdown and finishing with four receptions for 51 yards.  He's also caught Bucs Head Coach Todd Bowles' attention.

"He’s smart, and he’s tough," said Bowles. "He was hurt in the spring, so we really couldn’t see him. He came back this camp, [and] he looks great. He’s a very intelligent receiver. Again, he caught a lot of balls in college. He knows all the positions, and he took advantage of his opportunity."

READ: Buccaneers fans have 3,600 new seats to choose from in RayJ after Krewe's Nest expansion

At 5'7," Sterns maybe the shortest player on the team, but that hasn't stopped him from being a playmaker.

Last year, Sterns became just the third player in FBS history since 2000 to win college football's Receiving Triple Crown. Joining Alabama's DeVonta Smith (2020) and Texas Tech's Michael Crabtree (2007) as the only three players to do it. That's leading the nation in receptions, receiving yard and touchdowns.

It came as a surprise to some of his new teammates.

MORE: Tom Brady to be away from Buccaneers for a few days due to personal, non-football reasons, coach says

"Couple of them – they didn’t even know really," said Sterns. "You know the bigger name receivers in college football. A couple of them guys said, ‘You led college football?’ And I was like ‘yeah,’ because I don’t really talk a lot, so they probably didn’t know me or anything."

Currently, there are only two or three receiving spots up for grabs with seven players battling for those spots.

"In college I was just a return, punt return, kick return every now and then," said Sterns. "I've never really had to run down on anything, so it's an adjustment. I'm excited for it."

So learning how to be on gunner on special teams will be a big factor on if Sterns can earn a spot on the Bucs 53-man roster.