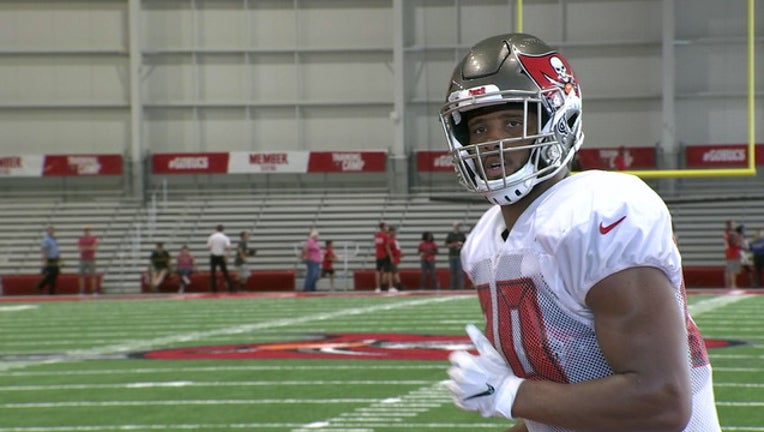 TAMPA, Fla. - Before his season ended early in week 11 due to an ankle injury, Buccaneers tight end O.J. Howard was putting together a Pro Bowl resume. Howard is now heading into his third season on the Bucs with expectations of staying healthy and earning elite status.

“Yeah, that’s the goal, to stay healthy and play the entire season,” said Howard. “Some injuries have happened, and they are just part of the game. Both of mine were crazy.”

The Bucs' first-round pick, Devin White, has seen plenty of Howard. He played against him in college and is now going against him in practice. To White, Howard is not a tight end.

“I hate to say it. He can flat out fly up and down the field,” said White. “He’s just a big wide receiver. He’s not a tight end. Tight ends don’t run that fast, they just don’t play like him.”

“I’m one of the faster tight ends, so it’s definitely an advantage form me,” explained Howard. “I try to do that every route, when I get a chance to use my speed and try to be very decisive with that in running route and things like that.”

Coach Bruce Arians agrees. He has been lining Howard up in a wide receiver position.

“I’ve taken a good amount of reps,” Howard continued.  “If you want to count OTA’s to now, I’m not sure how many. I think the more I go out there and split out wide, the more comfortable I’ll become when the season comes.”

As good as Howard is, he hasn’t avoided a B-A moment, a Bruce Arians tough love teaching lesson.

“I think everyone has already,” smiled Howard. “If you haven’t, it's coming. You might as well get it out of the way. It was just a play that I messed up, or a concept, or during OTA’s, something that I shouldn’t have done. Messed it up before and did it again, so trying to eliminate making the same mistake twice.”