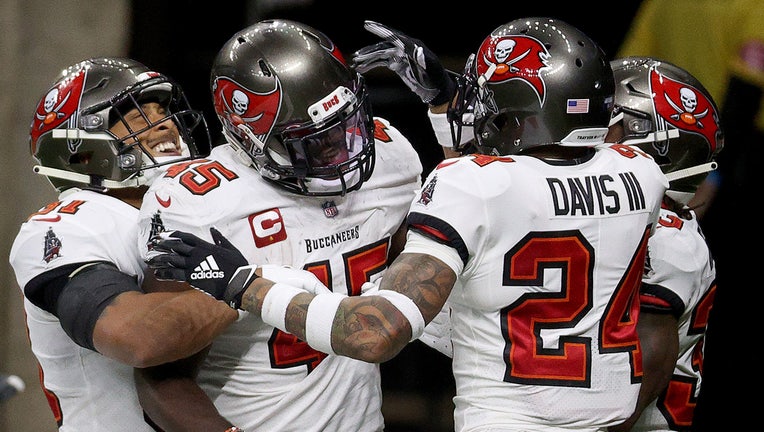 NEW ORLEANS, LOUISIANA - JANUARY 17: Devin White #45 of the Tampa Bay Buccaneers celebrates with his teammates after intercepting a pass thrown by Drew Brees #9 of the New Orleans Saints during the fourth quarter in the NFC Divisional Playoff game at

TAMPA, Fla. - If the Tampa Bay Bucs beat the Packers on Sunday, it would mean a ticket straight to the Super Bowl at Raymond James Stadium. No NFL team has ever played in the big game on their home turf.

The Buccaneers made the postseason once, in 2007, after their 2002 league crown, and not since -- until Brady and his six Super Bowl rings arrived from New England for this season. Their 30-20 win at New Orleans sent them to Lambeau Field for the NFC championship match.

"It’s great for our team," said Brady, who further establishes how responsible he was for all those titles in New England with each victory in Tampa. "We worked hard to get to this point. Two road playoff wins is pretty sweet."

If the Brady-led Bucs beat Green Bay on Sunday, the team will be in the Super Bowl against the Bills or the Chiefs.

The Super Bowl is set for Feb. 7. While RayJay can hold 65,890 fans, the NFL previously said there will be a limited audience capacity, but that figure has not been announced.

RELATED: No Super Bowl capacity set yet, but NFL says Tampa is 'more than ready' to play host

Both teams used key plays by their defense to win in the divisional round, and likely will need similar performances to advance. Sure, the Bucs and Pack are lauded for their offense, from their quarterbacks — Green Bay’s Aaron Rodgers has had perhaps the best season of his illustrious career — to strong runners Leonard Fournette and Aaron Jones, to a bevy of receivers, to solid lines.

But holding down All-Pros Rodgers and wide receiver Davante Adams is a must for Tampa Bay. So is neutralizing Brady hooking up with Mike Evans, Chris Godwin, Rob Gronkowski and Cameron Brate.

"It was huge. I think the defense was the key to the game," Brady said after the win over the Saints. It needs to be huge once more."

As for the conditions at Lambeau Field, well, forecasts call for temperatures in the 20s, which certainly is cold for a team from Florida, but not frigid. And remember where Brady won all those titles.

Oddly, the Packers have not won an NFC championship game at home since the 1996 season. They are four-point favorites in the earliest betting lines. If that seems low, remember who is quarterbacking the opposition.

So much will depend on Mahomes’ condition. While journeyman backup Chad Henne did well enough after Mahomes departed Sunday in the third quarter, even making two big plays to clinch the win, the Chiefs would be severely hampered if Mahomes can’t play.

Andy Reid, whose willingness to gamble and always play to win should be lauded regardless of circumstance, has designed a nearly unstoppable attack — when Mahomes is behind center. It’s hard to imagine Travis Kelce, Tyreek Hill and the other threats being, well, as threatening without him.

Reid maintains there is something else at play in KC. Asked what impressed him most about the Chiefs holding off Cleveland, he replied:

"Probably just the intestinal fortitude of the guys pounding through, not getting down when Pat went down. That’s easier said than done. Somebody asked that just about the quarterback, so just that part of it, having that trust, having earned that respect from the guys I think is big.

"But listen, nobody got down. I mean, there was nobody that was hanging their head or moping throughout the game."

Nor will they against Buffalo, which has been the AFC’s best team the last two months. The Bills are the most balanced of the four remaining contenders, and might have more confidence than anyone.

They lost at home to the Chiefs in a COVID-19 delayed game in October, 26-17. That game was played in wet weather.

The early betting line is Kansas City giving 3 1/2 points. Mahomes’ condition, not the field conditions, will determine the odds. And quite possibly who goes to the Super Bowl.