TAMPA, Fla. - The Bucs are sticking with the guys they've got.

In a year that saw a record 20 NFL trades before the deadline, the Bucs passed. Was it because there were no fair deals or do the Bucs believe they can win with this group?

"The cavalry ain't coming you know," stated Tristian Wirfs. "You've got who you've got. We've won with this group before and I think everyone has faith in one another."

It's been a while since the Bucs have suffered through a losing skid this long. It's the first time since 2019 that they've lost three straight games, but inside the Bucs locker room the players have the belief they can turn it around in time.

"Oh, for sure…We’ve got the same people we’ve done it with," said Carlton Davis III. "In football, things don’t always go your way – so what are you going to do when you have an obstacle presented in front of you? Turn around and run away? Like no, you keep fighting and we get back on track." 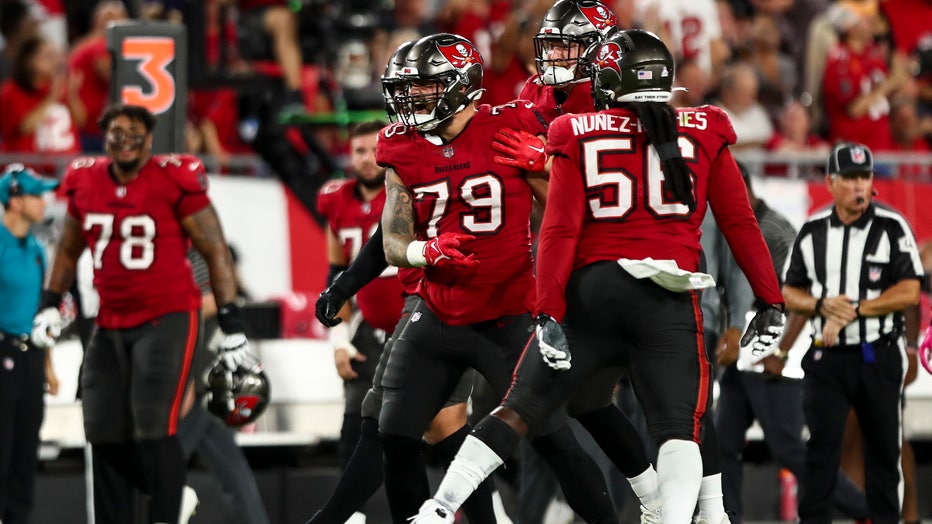 TAMPA, FL - OCTOBER 27: Patrick O'Connor #79 of the Tampa Bay Buccaneers celebrates with teammates after blocking a field goal during the second quarter of an NFL football game against the Baltimore Ravens at Raymond James Stadium on October 27, 2022

"We're ok," shared Wirfs. "We can still do everything we want to do. We've just made it a little harder on ourselves."

The Bucs need to start their turnaround Sunday, against the team that ended their Super Bowl dreams last season. I took a long time for Bucs safety Mike Edwards to get over their 30-27 loss on the second round of the playoff to the Rams.

"It's crazy. We could have been there (Super Bowl)," said Mike Edwards. "It's tough, but happy for us that we get to play them this year and see what happens."

This is a critical game for the Bucs and strangely enough it pits the last two Super Bowl champs against each other that are suffering with a similar three-win start.

"It's tough," said Edwards. "Being 3-5 is tough, especially given the team that we've got, with the roster we have. But at the same time it's only the first half of the season. You say we can't go 9-0 after this."

A win on Sunday could be the spark that turns the season around for the Bucs.