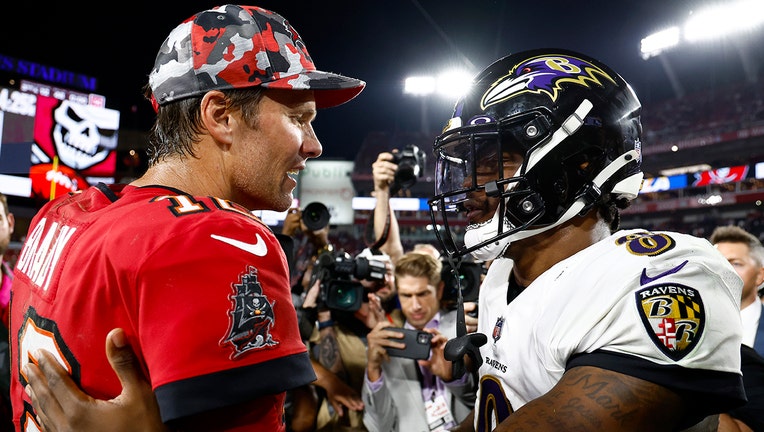 Tom Brady #12 of the Tampa Bay Buccaneers and Lamar Jackson #8 of the Baltimore Ravens meet on the field after their game at Raymond James Stadium on October 27, 2022 in Tampa, Florida. (Photo by Douglas P. DeFelice/Getty Images)

TAMPA, Fla. - Lamar Jackson threw for 238 yards and two second-half touchdowns to lead the Baltimore Ravens to a come-from-behind 27-22 victory over Tom Brady and the struggling Tampa Bay Buccaneers on Thursday night.

The Bucs (3-5) lost for the fifth time in six games following a 2-0 start, and the 45-yard-old Brady finds himself riding a three-game losing streak for the first time since 2002 — his first season as a full-time starter with the New England Patriots.

Jackson beat the seven-time Super Bowl champion quarterback for the second time in as many career meetings, directing TD drives of 77, 80 and 85 yards after Baltimore sputtered early and trailed 10-3 at halftime.

RELATED: 'We'll get through it': Bucs offense is broken and missing Gronk

The Ravens rushed for 233 yards, while Jackson completed 27 of 38 passes without an interception, including TD throws of 5 yards to Kenyon Drake and 10 yards to Isaiah Likely in the third quarter.

Baltimore scored on its first four possessions after halftime, with Justin Tucker booting a 30-yard field goal to make it 27-16 with a little over two minutes remaining.

Brady threw an 8-yard TD pass to Julio Jones with 49 seconds remaining, finishing 26 of 44 for 325 yards without an interception. He was sacked three times.

Leonard Fournette scored on a 1-yard run, and Mike Evans had six receptions for 123 yards for the Bucs.

Fournette’s TD was the first the Bucs have scored in the opening quarter this season. Brady spoke earlier in the week about how helpful it can be to play with a lead, however the offense did little to build on the early advantage after Ryan Succop’s 31-yard field goal made it 10-3.

The Ravens, meanwhile, wasted a couple opportunities take control early, settling for a 22-yard field goal after recovering a fumble at the Bucs 6 on a punt return and coming away with no points when Jackson threw incomplete into end zone on 4th-and-3 from the Tampa Bay 10 late in the second quarter.

Another chance to cut into their 10-3 deficit was thwarted when Justin Tucker’s 61-yard field goal attempt was deflected at the line as time expired in the half.

Ravens DE Calais Campbell (illness) was inactive. ... Ravens TE Mark Andrews (shoulder) left in the second quarter and did not return. ...CB Marlon Humphrey (hamstring) missed time in the first half, but returned at the start of the third quarter. ... WR Rashod Bateman (foot) sat out most of the second half. ... Edwards (hamstring) departed late in the fourth quarter, finishing with a team-leading 65 yards on 11 attempts.