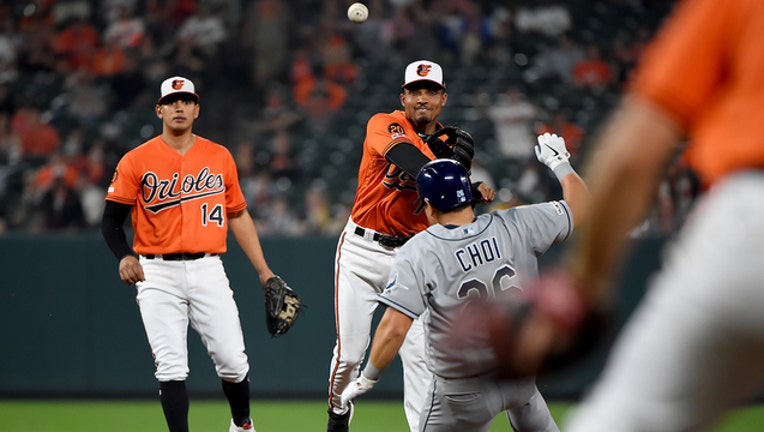 (Photo by Will Newton/Getty Images)

BALTIMORE (AP) - Right from the outset, Dylan Bundy showed this start was going to be different.

The Baltimore Orioles right-hander flashed a strong fastball, hit the corners and had the Tampa Bay Rays guessing what kind of pitch was going to come next.

"That was really enjoyable, no doubt," Orioles manager Brandon Hyde gushed after the Orioles beat the Rays 3-0 Saturday night for a rare win at home.

In a matchup between the team with the best record in the majors and rebuilding, last-place Baltimore, Bundy (1-4) was the difference. The right-hander gave up three hits in 7 1/3 innings, struck out four, walked one and hit a batter.

Bundy had lost 11 of 12 decisions since the start of last August and came into this game with a 6.67 ERA over six starts after allowing nine home runs in 28 1/3 innings.

"He had life in his fastball from the first inning tonight," Hyde said. "I feel like the previous starts, the fastball kind of came after bad things happened."

This is precisely what the Orioles hoped to see after drafting Bundy with the fourth overall pick in the 2011 draft. After showing promises in 2016 and 2017, he stumbled to 8-16 last year and was off to a rocky start before this exceptional performance.

"I just felt like I was throwing all pitches to both sides of the plate on both left- and right-handed hitters," he said. "It's all about rhythm and tempo, especially when you're going good."

The victory improved Baltimore's major league-worst home record to 4-11 and dropped the Rays' road mark to 12-5, still the best the big leagues.

Bundy was pulled after giving up a one-out double to Michael Perez in the eighth. Right-hander Shawn Armstrong got Willy Adames to hit a comebacker, and the pitcher threw the ball over the head of first baseman Chris Davis, seemingly allowing Perez to score.

But home plate umpire Lance Barrett ruled Adames ran inside the first-base line, called him out and sent Perez back to second base. Armstrong then struck out Brandon Lowe to end the inning.

"They got it right. Willy was not in the baseline," manager Kevin Cash said. "It was unfortunate. We didn't have much momentum, but that might have been it."

Mychal Givens worked the ninth for his third save.

After Jonathan Villar doubled and scored in the first inning and drove in a run with a force out in the third, Dwight Smith Jr. led off the fourth with a shot to center off Yonny Chirinos (4-1).

Ryne Stanek was scheduled to start for Tampa Bay, but the threat of rain caused Cash to switch to Chirinos, whom he thought was better suited to handle a delay.

The rain never came, and Chirinos allowed three runs and seven hits over 7 1/3 innings to absorb his first loss since Aug. 17, 2018, at Boston. He had won eight straight.

"You just have to prepare for anything, especially with this team," Chirinos said through a translator.

Tampa Bay outscored the opposition 30-10 in the first inning before Baltimore reversed the trend by jumping to a 1-0 lead.

Light-hitting Orioles shortstop Richie Martin wasn't in the starting lineup for a third straight game, mostly because of his .183 batting average. Hyde said he's seeking to get good pitching matchups for the Rule 5 draft selection, who has been solid in the field but has yet to hit the .200 mark this season.

Rays: INF Matt Duffy (hamstring tightness) did not have any setbacks in his first rehabilitation game Friday night with Class A Charlotte. "Good day. Three at-bats, 0 for 3, which were not really concerned about," Cash said. Duffy will play again on Sunday. ... RHP José De León (Tommy John surgery) pitched 1 2/3 innings for Charlotte on Saturday, allowing three runs in his first outing since August 2017. "Once he knocks off the three-inning, the four-inning, the five-inning (appearances), then we'll decide what we're going to do," Cash said. . OF Austin Meadows (thumb) batted against a high-velocity pitching machine and is almost ready for a rehab assignment.

Rays: Cash said Stanek would start in Sunday's finale, but warned that the threat of rain could change that.