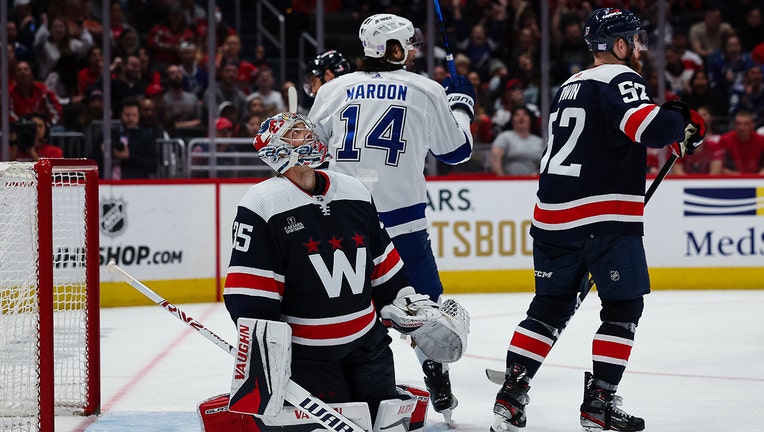 WASHINGTON, DC - NOVEMBER 11: Pat Maroon #14 of the Tampa Bay Lightning celebrates after Nick Perbix #48 (not pictured) scores a goal against Darcy Kuemper #35 of the Washington Capitals during the third period of the game at Capital One Arena on Nov

WASHINGTON - Darcy Kuemper got the best of the Tampa Bay Lightning again, making 28 saves to backstop the Washington Capitals to a 5-1 victory Friday night against the team

"As a group we came together with the urgency that we really wanted this win," Kuemper said. "You could see it in our play right from the start, and it was nice to see everyone get rewarded."

Sonny Milano scored twice and Anthony Mantha and Aliaksei Protas each had a goal for Washington, which avoided a second consecutive loss after dropping six of its previous eight games. The Capitals won despite playing almost two periods down a forward after Nicolas Aube-Kubel was given a match penalty for an illegal check to the head of Lightning defenseman Cal Foote, who did not return and was not doing well afterward, according to coach Jon Cooper.

"Not great," Cooper said. "He obviously couldn’t come back. That’s a tough hit. That defines the word blindside. It’s too bad we’re playing them again (Sunday) because I doubt he will be around to see the game."

The Lightning finished the game with half the defensemen they started with after losing Foote and then Mikhail Sergachev and Erik Cernak, who laid out to block shots from Alex Ovechkin.

"That’s championship pedigree," captain Steven Stamkos said. "That’s what you have to do to win in this league, and it’s engrained in guys. It’s tough to see when you see really good defensemen having to go out and eat those shots, but they’ve been doing that for their whole careers here and that’s why they’re so valuable."

The Capitals, coached by assistant Kevin McCarthy with Peter Laviolette in COVID-19 protocols, killed off the entirety of Aube-Kubel's 5-minute penalty, which came after a fight broke out between Patrick Maroon and Garnet Hathaway during the officials' review of the head shot. With tensions high all night, a line brawl broke out with 5:40 left in the third period, resulting in two fights and 26 minutes worth of penalties.

Milano's goal on a breakaway out of the penalty box 7 seconds after he finished serving Milano's time was his first since signing with Washington after the season began and getting called up 13 games in. With the pass to spring Milano, John Carlson picked up the primary assist, becoming the first defenseman in Capitals history to reach 600 points and moving into fifth on the franchise scoring list.

"It’s been a fun ride," Carlson said. "A lot of crazy experiences, and I’m just glad to do it here."

Rookie Nick Perbix broke up Kuemper's shutout bid late, Andrei Vasilevskiy allowed five goals on 24 shots and the defending Eastern Conference champion Lightning have lost two in a row and six of their past seven.

"We want to get back on track," defenseman Victor Hedman said. "We just got to stick with it. You can’t get frustrated, that’s the bottom line. We believe in ourselves, but it’ll be good to get these guys once again."

The Lightning host the Capitals on Sunday night in the second game of the teams' home-and-home series.