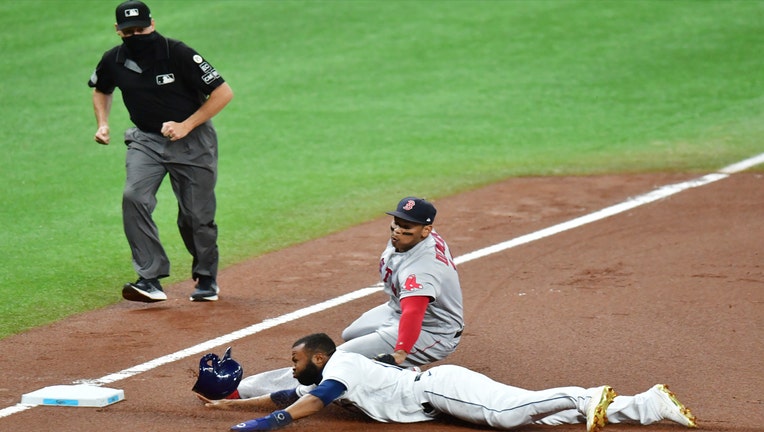 Devers hit a two-run drive in the third and gave Boston a 4-3 lead with a run-scoring single in the seventh off Pete Fairbanks (4-2).

Dalbec’s power surge is the longest streak by a Boston rookie.

Hunter Renfroe and Brandon Lowe homered on consecutive pitches for the Rays, who have lost three in a row for the first time since a five-game skid from July 29 to Aug. 2 at Atlanta and Baltimore. Tampa Bay's lead was cut to 3 1/2 games over second-place Toronto, and the Rays (28-16) dropped behind Oakland (27-15) for best record in the AL.

Ryan Weber (1-2) allowed one run in 2 1/3 innings. Matt Barnes walked Joey Wendle leading off the ninth, allowed a stolen base and a two-out wild pitch, then struck out Austin Meadows with the potential tying run on third for his fifth save in eight chances.

Dalbec put the Red Sox up 3-2 with an opposite-field solo drive off Josh Fleming in the fifth. He became just the fifth player to have at least six homers in his first 10 games.

Tampa Bay tied it at 2 when Renfroe and Lowe homered during the fourth off Mike Kickham. The left-hander, making made his first start since July 1, 2013, for San Francisco, gave up two runs, three hits and one walk and over four innings with eight strikeouts.

Meadows got the Rays even at 3 on a fifth-inning RBI double.

Fleming allowed three runs and six hits over 4 1/3 innings in his bid to become the first Rays pitcher to win his first four major league starts.

Rays: Acquired INF Pedro Martínez from the Cubs as one of the players to be named in the Aug. 30 trade for José Martínez. Martinez is son of pitching great Pedro Martínez.