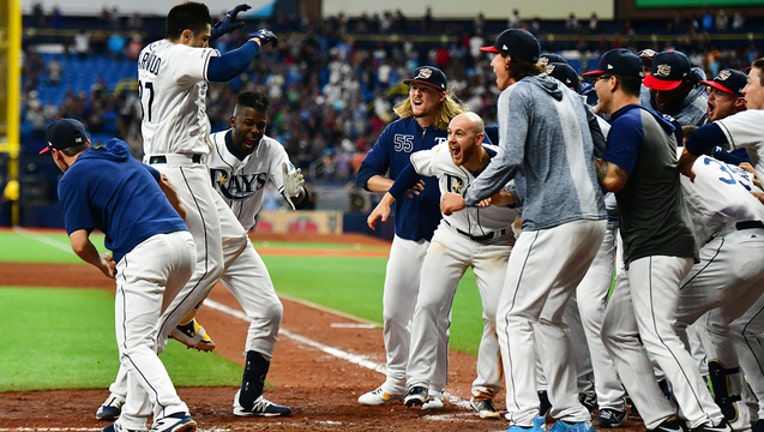 ST. PETERSBURG, Fla. (AP) - Travis d'Arnaud hit a two-out homer off Chad Green in the bottom of the ninth inning, lifting the Tampa Bay Rays past the New York Yankees 4-3 on Saturday.

D'Arnaud's winning homer against Green (2-3) into the right-field seats got the Rays back within 7 1/2 games of the AL East-leading Yankees, who had won the first two games of a four-game series in extra innings. Tampa Bay is 3-9 against New York this season.

It was just New York's third loss in its last 19 games.

Nate Lowe hit a go-ahead two-run homer off CC Sabathia in the seventh that gave Tampa Bay a 3-2 lead.

Blake Snell allowed one run and five hits over five innings. He went 2-3 with a 9.64 ERA in six starts last month.

Brett Gardner homered in the second for the Yankees.

Pineda (6-4) gave up five hits and a run on a solo homer in the sixth inning by Elvis Andrus.

Marwin Gonzalez homered for Minnesota. Taylor Rogers picked up his 12th save with 2 1/3 scoreless innings and five strikeouts.

Shin-Soo Choo had three hits and Willie Calhoun added a two-run homer for the Rangers, who have lost six of seven.

Scherzer (9-5) allowed four hits and struck out 11 with one walk. He has won seven straight starts.

Alex Gordon had two hits and a walk for the Royals, who have lost eight of 10.

ATLANTA (AP) - Yadiel Rivera hit a go-ahead, two-run single in the fifth and Miami beat Atlanta for the second time this season.

Sergio Romo gave up a single in the ninth before recording three straight outs for his 16th save in 17 chances as Miami snapped a five-game skid.

Ronald Acuña Jr. led off the first inning with his 21st homer. Rookie Austin Riley homered in the second, but the Atlanta offense lost its momentum after a run-scoring single by Nick Markakis in the third gave the Braves a 4-2 lead.

Max Fried (9-4) allowed five runs on 11 hits, including the homers by Harold Ramirez and Starlin Castro, in five innings.

Cashner (9-3) allowed three hits and one run, walked none and struck out four in seven innings.

Jimmy Yacabonis struck out the side on 13 pitches in the eighth and Shawn Armstrong finished for Baltimore.

Cashner retired his first 10 batters before Vladimir Guerrero Jr. hit a groundball single up the middle in the fourth. Guerrero advanced on a wild pitch and scored on a two-out single by Biggio, but that was it for the Blue Jays, who scored just once for the second straight game.

The Indians have won nine of 11 games in Cincinnati and lead the intrastate series 62-50. They've taken two of three this season.

Cleveland has won five in a row overall, matching its longest winning streak of the season.

Lindor hit his fourth leadoff homer of the season and hit another solo shot in the fifth.

Perez had three singles and a two-run homer in the eighth off Michael Lorenzen (0-2). Jake Bauers singled with the bases loaded in the ninth as the Indians pulled away.

Gurriel's solo shot extended Houston's lead to 3-0 in the sixth and gave him a 10-game hitting streak and the longest stretch of consecutive games with home runs in his career.

Ryan Pressly allowed one hit in the eighth and Collin McHugh struck out the side in the ninth to help Houston to its sixth win in seven games.

Newman had four hits, including a home run. Melky Cabrera also homered for the Pirates.

Dario Agrazal (2-0) allowed two runs in six innings after being recalled from Triple-A Indianapolis. The rookie right-hander gave up those runs on two homers, one by Mike Moustakas in the first and another by Yasmani Grandal two innings later.

Adrian Houser (2-3) gave up more than three runs for the second time in 19 appearances - including five starts - this season, allowing five on seven hits in four innings.