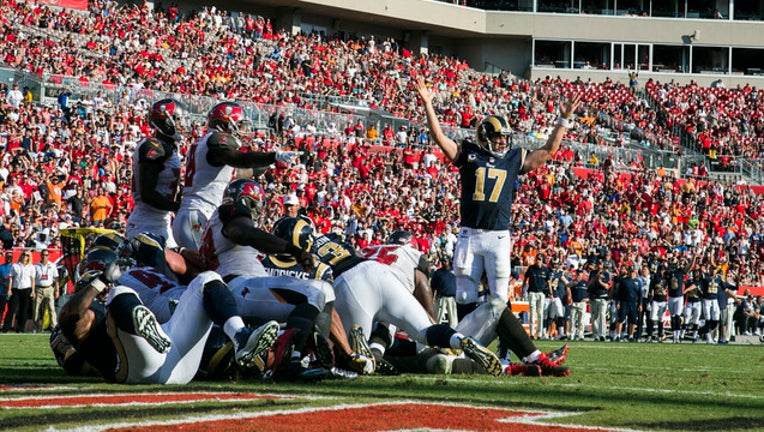 Los Angeles Rams quarterback Case Keenum looks to the referee to make the touchdown call during the first half. (Photo by Mark Wallheiser/Getty Images)

TAMPA, Fla. (AP) - Turns out the offensively challenged Los Angeles Rams are capable of getting the ball in the end zone.

Case Keenum threw for the team's first touchdown since relocating back to Los Angeles, and Todd Gurley rushed for two more scores Sunday in a 37-32 victory over the Tampa Bay Buccaneers.

The Rams (2-1), who did not have TD in the first two games of the season, also scored on Ethan Westbrooks' 77-yard fumble return and Tavon Austin's 43-yard reception in the fourth quarter before thunder and lightning caused a 69-minute weather delay with two minutes remaining.

" When you score points, which we did, you've got a chance," Rams coach Jeff Fisher said.

The Rams, who used three field goals to beat Seattle 9-3 in Week 2, saw Keenum complete 14 of 25 passes for 190 yards, two TDs and one interception, which Bucs linebacker Kwon Alexander returned 38 yards for a first-quarter touchdown. In addition to throwing a TD pass to Austin for a late 11-point lead, he got the Rams on track early with his 44-yard scoring pass to Brian Quick for the franchise's first TD as the L.A. Rams since 1994.

"Anytime you can get out there and have success early, it kind of settles you down as an offense," Keenum said.

The defense did its part, too, holding off Jameis Winston's bid to rally the Bucs (1-2) in the closing seconds.

Tampa Bay forced a punt after the lightning delay and drove from its 44 to the Rams 15 in 1:42 before Winston threw two incompletions and was tackled by Robert Quinn after a 10-yard run on the final play. Winston looked tentative and never really took off full-speed on the play, instead apparently still hoping to throw the ball after he crossed the line scrimmage.

"I was just trying to bait them, get closer to the end zone," Winston said. "At that moment I've got to give somebody a chance in the end zone."

Winston threw for 405 yards and three TDs for Tampa Bay (1-2). He threw an interception that set up one of Gurley's two 1-yard touchdown runs, and was stripped by the Quinn on the fumble that Westbrooks returned up the left sideline for a 31-20 lead.

"I'm confident in my defense. It's the best defense in the league, and I believe that," Keenum said. "I had no doubts they were going to stop them."

Officials suspended play during the two-minute warning with the Rams facing third-and-11 from their 5. Fans were asked to clear the stands and seek coverage in stadium concourses before the approaching thunderstorm passed directly over the field, dumping heavy rain.

The Rams scored their first touchdown of the season, driving 75 yards on eight plays following the opening kickoff to take a 7-0 lead on Keenum's 44-yard pass to Quick just over three minutes into the game. Gurley's TD, set up by ex-Buc Mark Barron's interception and 7-yard return to the Tampa Bay 22, trimmed Tampa Bay's lead to 20-17 just before halftime. With Tampa Bay driving for a possible go-ahead score in the fourth quarter, Quinn's sack/strip led to Westbrooks' fumble return. It was the NFL-leading 18th fumble Quinn has forced since entering the league in 2012.

With RB Doug Martin sidelined with a hamstring injury, Charles Sims made his first NFL pro start for the Bucs and rushed for 55 yards on 13 attempts. The third-year pro, who has been a key component of Tampa Bay's passing game since Winston joined the team, also had six receptions for 69 yards.

The Bucs unveiled a new video board system as part of a $140 million renovation of Raymond James Stadium. The system features two 9,600 square-foot boards on the north and south ends of the stadium, as well as four 2,300 square-foot tower walls. With more than 31,000 square feet of combined video display space, the team says it the third-largest video board system in the NFL.

Evans had 10 receptions for 132 yards and became the first player in Bucs history to catch a TD pass in three consecutive games to start a season. WR Adam Humphries finished with nine receptions for a career-best 100 yards, and TE Cameron Brate had TD receptions of 3 and 1 yards.