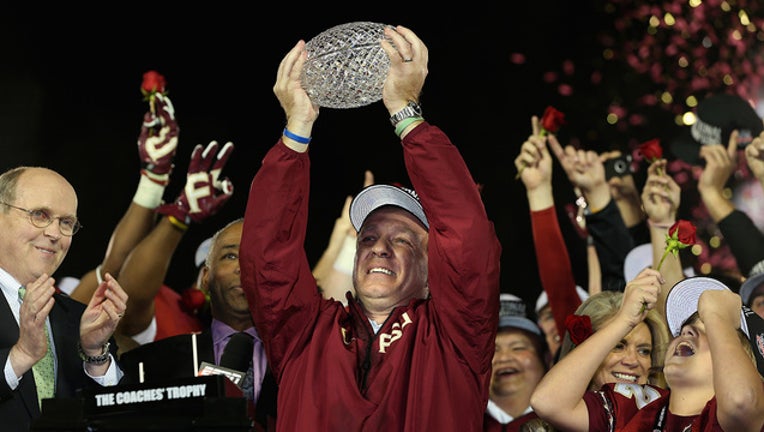 TALLAHASSEE, Fla. (AP) - Jimbo Fisher, who coached Florida State to its third national title in 2013 and opened this season with his team ranked in the top five, is leaving to take the same job at Texas A&M.

"I believe Texas A&M is getting one of the best coaches in college football. We appreciate all he has done for our program and wish him and his family great success moving forward," Thrasher said in a statement that closed days of speculation about Fisher's future.

Fisher leaves Florida State after going 83-23 in eight seasons. Besides the national championship, he also led the Seminoles to three Atlantic Coast Conference titles and four ACC Atlantic Division crowns. He will replace Kevin Sumlin, who was fired last Sunday after going 51-26 in six seasons at Texas A&M.

Fisher is just the fourth head coach to leave a school where he has won an AP national championship and go directly to another college job. The last to do it was Johnny Majors, who went from Pittsburgh to Tennessee in 1977.

"President Thrasher and I have worked together through this challenging period while coach Fisher was making a decision, and I appreciate the cooperation, support and leadership he has provided," athletic director Stan Wilcox said. "We are extremely pleased by the quality of individuals who have already expressed interest in being the head coach at Florida State University.  I am confident we will fill the position very soon."

Florida State (5-6) faces Louisiana-Monroe on Saturday and needs a win to be bowl eligible for a 36th consecutive season. Wilcox said defensive line coach Odell Haggins will be the interim coach.

The Seminoles were ranked third in the preseason Top 25 but lost quarterback Deondre Francois in the opening loss against Alabama and were 3-6 at one point before winning their last two. Florida State is trying to avoid its first losing season since 1976.

Fisher, who had dodged questions about his interest in Texas A&M for the last two weeks, said as recently as Thursday that he intended to coach on Saturday. However, growing frustration with the program from fans, alumni and parents of players made that unlikely. Junior linebacker Josh Sweat said earlier in the week that players had discussed the rumors but that they were trying to maintain the focus on this week's game.

"We still have to play regardless of what happens. Stay or leave it's about the next game," Sweat said. "We are still practicing and having fun."

Last December, Fisher signed a contract extension through 2024 that made him among the highest-paid coaches in the country. He was making $5.7 million this season, sixth-highest.

Yet it was the third straight year that Fisher's name was linked with a Southeastern Conference program. He was mentioned the last two years as a candidate at LSU, where he spent seven seasons as the offensive coordinator (2000-06). While at LSU he also worked with Scott Woodward, now the athletic director at Texas A&M. The Aggies' Board of Regents has scheduled a conference call on Monday where they are expected to approve Fisher's hiring.

Texas A&M has invested heavily in facilities the past five years, including a football operations center. Fisher has spoken about his desire for Florida State to add its own football-only building.