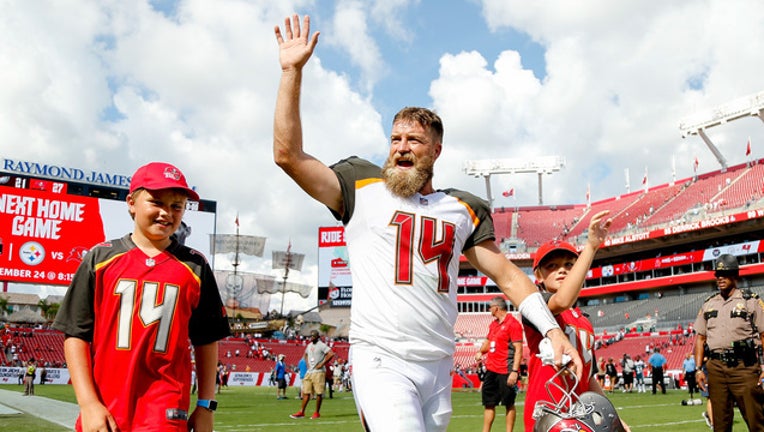 Ryan Fitzpatrick waves to the crowd after they defeated the Philadelphia Eagles 27-21 at Raymond James Stadium on September 16, 2018 in Tampa, Florida. (Photo by Michael Reaves/Getty Images)

TAMPA, Fla. (AP) - Ryan Fitzpatrick threw for more than 400 yards and four touchdowns for the second straight week, leading the Tampa Bay Buccaneers to a 27-21 victory over the reigning Super Bowl champion Philadelphia Eagles on Sunday.

Filling in for suspended quarterback Jameis Winston, the 35-year-old Fitzpatrick completed 27 of 32 passes for 402 yards and has the suddenly explosive Bucs off to a 2-0 start for the first time since 2010.

DeSean Jackson scored on a 75-yard reception on the first play of the game. O.J. Howard also had a 75-yard TD catch in the first half for Tampa Bay, which stunned New Orleans 48-40 on the road in its season opener.

Nick Foles threw for 338 yards for the Eagles (1-1), who rallied from a 20-point, third-quarter deficit.

The Super Bowl MVP's 2-yard TD pass to Nelson Agholor on fourth down trimmed Tampa Bay's lead to 27-21 with 2:46 remaining. The Bucs didn't give the Eagles' injury-decimated offense a chance to finish the comeback.

Fitzpatrick, a 14-year veteran and one of four players in NFL history to throw TD passes for seven franchises, produced a couple first downs on Tampa Bay's ensuing possession to drain all but 19 seconds off the clock.

Chris Godwin and Mike Evans had TD receptions of 8 and 4 yards, respectively, for the Bucs. Jackson, who had two TD receptions before leaving the season opener with a concussion, finished with four catches for 129 yards.

The Eagles opened the season with Foles throwing for just 117 yards in an 18-12 victory over the Atlanta Falcons.

They drove 78 yards in 13 plays to pull even with Tampa Bay in the second quarter, only to watch Howard turn a short pass into another long TD by eluding two defenders and turning up the left sideline. Eagles cornerback Ronald Darby was unable to chase down the 6-foot-6, 251-pound tight end.

Foles finished 34 of 46 with no interceptions. Corey Clement scored on a 15-yard run in the first half, and Jay Ajayi's 2-yard TD run began Philadelphia's rally from a 27-7 deficit.

Eagles: The Eagles were already without receiver Alshon Jeffery and running back Darren Sproles, and Foles' job got tougher when running back Jay Ajayi (back), receiver Mike Wallace (ankle) and tackle Jason Peters (quad) left in the first half. Ajayi returned at the start of the second half.

Buccaneers: With Brent Grimes (groin) missing his second straight game and Vernon Hargreaves III (shoulder) on injured reserve after getting hurt at New Orleans, the Bucs played without both starting cornerbacks. Defensive tackle Beau Allen (foot) and safety Chris Conte (knee) left the game in the second half.