TAMPA, Fla. - Instead of enjoying this spring getting to know his new teammates at Gaither High School, Kiael Kelly, the son of former Tampa Catholic and Miami Hurricane star Kenny Kelly, works on his game with his brother and quarterback coach, CJ Bennett.

For one of Tampa Bay's top arms, there's still a void.

"Definitely missing a lot of time with being out,” said Kelly. "We were together a lot before this happened and we still communicate every day."

Kiael already has nine Division I offers, including ones from South Florida, Illinois, and Syracuse. He might have a lot more if the coronavirus shutdown hadn't occurred. 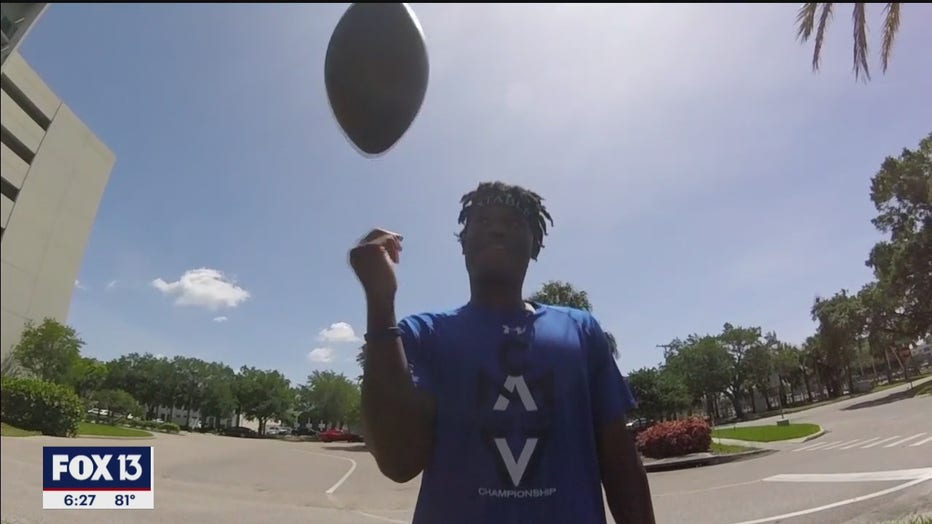 Despite spring sports being canceled, Kiael Kelly is working toward a future in college sports.

College recruiters aren't allowed to meet with Kiael right now, but they've gotten creative with virtual tours of their schools.

"Yesterday, I was on a Zoom with a college,” said Kelly. "It actually helped a lot. I could see everything that is there. All the facilities and stuff. It was something new, but it was kind of cool how they had it set up."

CJ Bennett quarterbacked and coached in college and he knows first-hand the importance for Kiael to get in front of college coaches.

"When it comes to quarterbacks, usually the head coach or the offensive coordinator has to see him throw live,” said Bennett. "Between Alabama to every school from here to up north, the quarterback's coach has to see those mechanics live. But also, at the end of the day, as much as the live evaluation helps, it comes down to game film, which I think he's going to put even more of this stuff out there at Gaither."

Kiael would like to commit to a college before the season starts, but like the rest of America right now, it's a waiting game.